OUR people are increasingly becoming overweight, especially the children. Even the government has acknowledged this, but how can one resist a good meal, especially a rich buffet spread?

Buffet spreads are always an indulgence, but if you promise to exercise later (or before the meal), then you may go ahead and treat yourself.

The Tonka Bean Deli Cafe at Impiana KLCC Hotel has just launched the Southern BBQ Surf Up buffet dinner. The menu is so extensive, you’ll barely have space to try even 60% of the dishes. 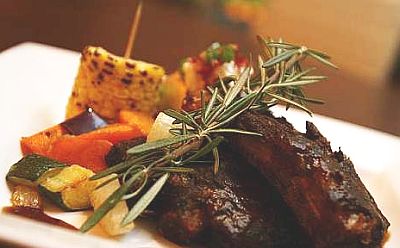 “Over time, we have introduced more dishes and reinvented some of the older ones,” says senior sous chef, Bustami Osman.

The appetisers comprise Fresh Oysters, New Zealand Mussels and Salmon Gravalax. They are best eaten fresh, so head for these first.

For starters, I opted for the Yoghurt-Mint Cucumber Salad, Waldorf Salad and Red Coleslaw with Apple, Celery and Honey. Being a small eater, I didn’t want to fill myself up too quickly and not have enough room for anything else.

This proved to be a wise choice as the salads helped to whet my appetite.

If you’re not a western salad buff, then go for the local salads comprising Spicy Fried Ikan Bilis, Rojak Pasembor, Tauhu Sumbat and various Keropok and Papadum. This was a hit with the diners and had to be constantly topped up.

Next, I chose the guilt-free Chinese Herbal Chicken Soup, which I found soothing. The chicken had been marinated and boiled for quite a while, leaving the herbs and meat soft and tender.

“Rev, you’re not supposed to eat the herbs,” my colleague commented but I chewed on anyway and polished off my bowl.

The chef then suggested I try the Deep Fried Spicy Prawn, but I found it a little disappointing for there was hardly spice or chilli in it.

When the weather permits, they will barbecue the meats outdoors and you can dine al fresco. Here, you can have all the protein you want: Memphis Beef Ribs, Caribbean Mojo Chicken Breast, Huli Huli Spring Chicken, Lamb Sausages, etc. 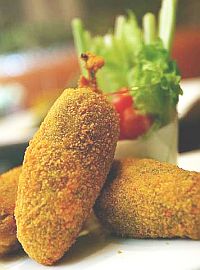 I had the Roasted Lamb with Mint Gravy and found it delectable. The lamb was tender, with mostly lean meat and cooked in the style I liked. The Grilled Prawn Piri Piri Coated with Coconut was fresh and very nice.

The hot buffet section saw all kinds of potatoes, fish, spaghetti and others, but I gave most of it a miss. I had the Buffalo Chicken Wings with Celery Stick and Blue Cheese Dipping and the BBQ Vegetables Skewer with Lemon Basting Sauce. The chicken wings were ordinary, while the veggies were crisp and tangy.

By this time, I was getting full but I still had room for dessert.

For the sweet-toothed, there are 16 mouthwatering local and western choices, from an assortment of Nyonya kuih to Chocolate Suzette Gateux with Cinammon Custard. There are also six flavours of Baskin Robbins ice cream to choose from and toppings.

My favourite dessert was the Bread and Butter Pudding with Vanilla Sauce. Chef Bustami’s version comprised toasted bread mashed together with the right amount of butter and egg. Unlike the soggy, eggish-tasting ones I’ve had before, the bread pudding here was firm and came with a “kurang manis” sauce.

It was the perfect finish to a meal.