Pasir Penambang’s Sin Hai Peng Seafood restaurant is the place to be if you want it fresh.

KUALA SELANGOR is known for its fireflies, fishing village and most importantly, fresh seafood.

As a child, Rif would follow his father on regular fishing trips there.

Usually, they would land a dozen fishes, but there were times they left the river bank empty handed.

Not wanting to disappoint the other family members, his father would drive to a fishing village to buy some fish home for dinner. These days, they hardly go fishing but would instead go to Hai Peng Seafood Restaurant for a meal.

There are many other seafood restaurants in the area, but according to Rif’s father, the food at Hai Peng Seafood Restaurant is the tastiest and least expensive.

I reckon the other restaurants cater for tourists, as I spotted quite a few tour buses outside.

Last weekend, I gathered a few of my makan kakis to go on a seafood binge at Hai Peng Seafood Restaurant.

We left Kuala Lumpur at 11am, and reached the restaurant, famished, at close to 12.30pm.

I ordered nine dishes for the six of us.

The lady boss thought we were pulling her leg, but I assured her we were all big eaters.

The Oh Chien (Fried oysters RM14) came with plump oysters and a scatter of tiny shrimp.

Unlike Penang and Malacca’s version, this was similar to the Oh Chien in Perak.

The egg mixture was fried until the edges were crunchy while retaining a fluffy centre. 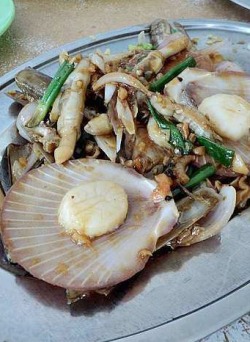 Although smaller than usual, the oysters were fresh, juicy, and tasted like it was just harvested of the sea.

I’ve never tried this until recently when his parents ordered it for me.

Do not dig into the simmering hot dish immediately because you might end up scalding your tongue.

One bite and I was hooked.

The tamarind-based gravy was sweetened with shallots and tomato slices.

I thought the spiciness of the dish was just right, and the stingray slices were tender and well flavoured by the thick gravy. It went very well with white rice.

I’m not exactly sure what this dish is called, but it is essentially tiny shrimp or har bee (RM14) fried with chilli and curry leaves.

The shrimp was sweet, meaty and full of kick from the seasoning. Good stuff! 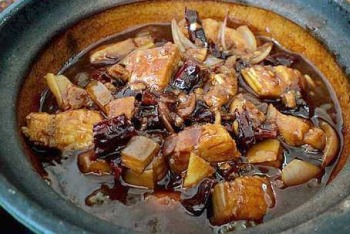 Instead of mixing the salted egg into the batter mixture, the squid is merely fried with salted egg. Not like the crispy battered version I’m accustomed to, but this was quite tasty. They were generous with the salted egg yolk.

I thought the thick sauce of garlic, complemented the freshness of the clams well, especially the scallops. We left nothing behind and even the shells were licked clean.

The prawns were sweet and succulent, but they didn’t really add flavour to the mee hoon. Crabs are still a better choice, if you asked me.

I was disappointed with the size of the crabs as they were quite small that day.

We opted for the crabs (RM35 per kg) to be cooked sweet and sour style.

Taste wise, the gravy had a good balance of sweetness, sourness and spiciness. Despite the tiny size, the crabs were fresh and sweet. If you discount the size factor, I’m sure you would enjoy the crabs as much as I did.

Being gluttons, we decided to order an extra plate of steamed prawns (RM24), because we couldn’t get enough of fresh seafood.

Our only grouse was not enough rice wine in the dish as we like our prawns to be doused in plenty of alcohol.

Cost for our lunch with Chinese tea and one large beer came up to RM194 for six people which is pretty reasonable for the amount of food we had. Don’t you think so?