Gins with Malaysian flavours like pandan, nangka & galangal are here

Malaysia is finally getting its very own gin, made with uniquely Malaysian botanicals.

Eiling Lim, best known as Malaysia’s first independent bottler of whiskies, is producing a range of gins that incorporate the uniquely Malaysian flavours of pandan, jackfruit and galangal.

The gins, interestingly named Pandan Predator, Nasty Nangka and Gawky Galangal, are set to hit the market in about a month.

Lim decided to make her own gin two years ago, when she saw how popular the spirit is in Belgium, where she lives with her husband, Luc Timmermans. “Many restaurants and bars have their own gin, and I thought it would be a good idea to do the same for the Malaysian market,” she said.

However, she didn’t just want to do any old gin – she wanted a gin that would reflect her Malaysian roots. “Last year, I was back in Malaysia and my distributor, Wholly Spirits, took me around some bars in KL, where I noticed that they are into making their own infused gins,” she recalled. “Then it struck – I should create a gin that is based on Malaysia and Asian flavours. I want to introduce these lovely flavours to the world, and what a better to do it than in a bottle of gin?”

The flavours Lim eventually settled on were pandan, jackfruit and galangal.

Eiling Lim chose pandan for one of her gins because it is such a common plant in Malaysia but relatively unknown in other countries. Photo: Eiling Lim

“When I was young, we used to have a pandan plant in our garden. Whenever we needed pandan leaves to make a dessert, I would just go to the garden and get some. It is so common in Malaysia, but so foreign in other parts of the world. It emits a very nice aroma which acts as a natural air freshener and I thought it would be nice to experiment with it in the gin,” said Lim.

“Then as I was going from bar to bar, I found that jackfruit is also another favourite ingredient as it has a very pungent sweet aroma and it tastes like a ripe pineapple. I have seen bartenders infusing gin with pieces of jackfruit and I decided that should be one of the botanicals in my gin. I wanted to create a consistent gin product with the aroma of jackfruit, as gin infusion can be rather inconsistent and the spirit turns cloudy from the pulp.”

As for galangal, Lim says she chose it because it has a unique, sharp, citrusy and almost piney flavour that is close to ginger, but not quite ginger.

The flavours may be Malaysian, but the gin itself is made in Belgium’s Flanders region, the birthplace of jenever, the forefather of gin. It is produced at De Cort Distillery, run by a distiller named Manu De Cort, who only makes only about 30,000 bottles a year.

“Gin usually starts with neutral spirit, which most gin distillers buy in bulk. There are two primary ways to flavour the gin: You can either add flavours to a distilled spirit and bottle it, or you can infuse botanicals into the spirit by distilling them together, which we are doing,” Lim explained. “At De Cort Distillery, they distill a big part of the alcohol themselves, and it is a distillery that prides itself with using raw materials from farms, real botanicals and real people.”

Since De Cort prefers to work with fresh ingredients, and those used in Lim’s gins were not available in Belgium, she had to fly them in from South East Asia. No extracts are added to the gin, with all the ingredients steeped for 36 hours and distilled in a Holstein still to create a more “rounded” spirit.

The uniqueness of the gin isn’t just confined to the spirit. The labels on the bottles feature original monster characters designed by Tintoy Chuo, a creative designer who is also the co-founder of Fusion Wayang Kulit, best known for its wayang kulit renditions of Star Wars and other pop culture characters.

Lim said she needed a label that would stand out on the shelf in a supermarket or a bar. “Most gin bottles have very ‘nature’-based labels – simple and full of words. I didn’t want that,” she explained. “Tintoy came up with a monstrous character for Pandan, Nangka and Galangal, all drawn from scratch and inspired by the looks of the leaf, root and fruit. Both my husband and I loved it and I gave the character each a catchy name to represent the flavour of each gin.”

Lim’s three gins is now available in Malaysia, and is distributed by Wholly Spirits. For more information, e-mail info@whollyspiritsasia.com or visit the Wholly Spirits Facebook page.

Gins with Malaysian flavours like pandan , nangka & galangal are here 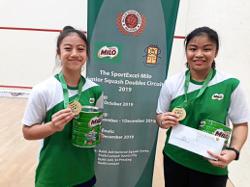 At just 13, Doyce has big plans in squash 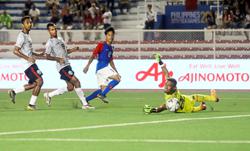 It’s back to Belgium for Luqman