MTR has been very popular since it launched in Malaysia a few months ago and is generally quite packed, especially at lunch time. — Photos: ART CHEN/The Star

In the south Indian city of Bangalore, Mavalli Tiffin Room (MTR) is a culinary bastion that is deeply entrenched in the cosmopolitan city’s epicurean framework. Much of this has to do with its gilded history, which dates all the way back to 1924 when three brothers started a small restaurant. For the next three decades, one of the brothers – Yagnanarayana Maiya – managed the restaurant and in 1960, the eatery moved to its current location in Lalbagh Road and was renamed MTR.

Nearly 100 years later, MTR’s success continues unabated and the brand has spread its wings, opening eight more outlets in Bangalore, one in Mangalore, as well as outlets in Singapore, Dubai and six months ago, Malaysia.

“One of the very legendary stories about MTR was that back in the day, there were serpentine queues outside the original restaurant and people waited for hours to eat a tosai – even my father did it. After the first tosai, you wouldn’t be served a second one, because they would say ‘No, we have people waiting’. So the whole reason for expansion was partly because people came from all parts of Bangalore and would wait hours to get one tosai,” says Adarsh Srinivas, one of the directors of Culin Ventures Sdn Bhd, the local company signed up to launch MTR 1924 in Malaysia.

Adarsh is a Bangalore native who teamed up with three of his friends from Bangalore – Vivek Tholasi, Praveen Prabhakar and Dr Arvind Nagendra as well as Malaysian partner Jayanthi Pachapan (whose husband Arvind Viswanath is from Bangalore) to launch MTR in Malaysia. 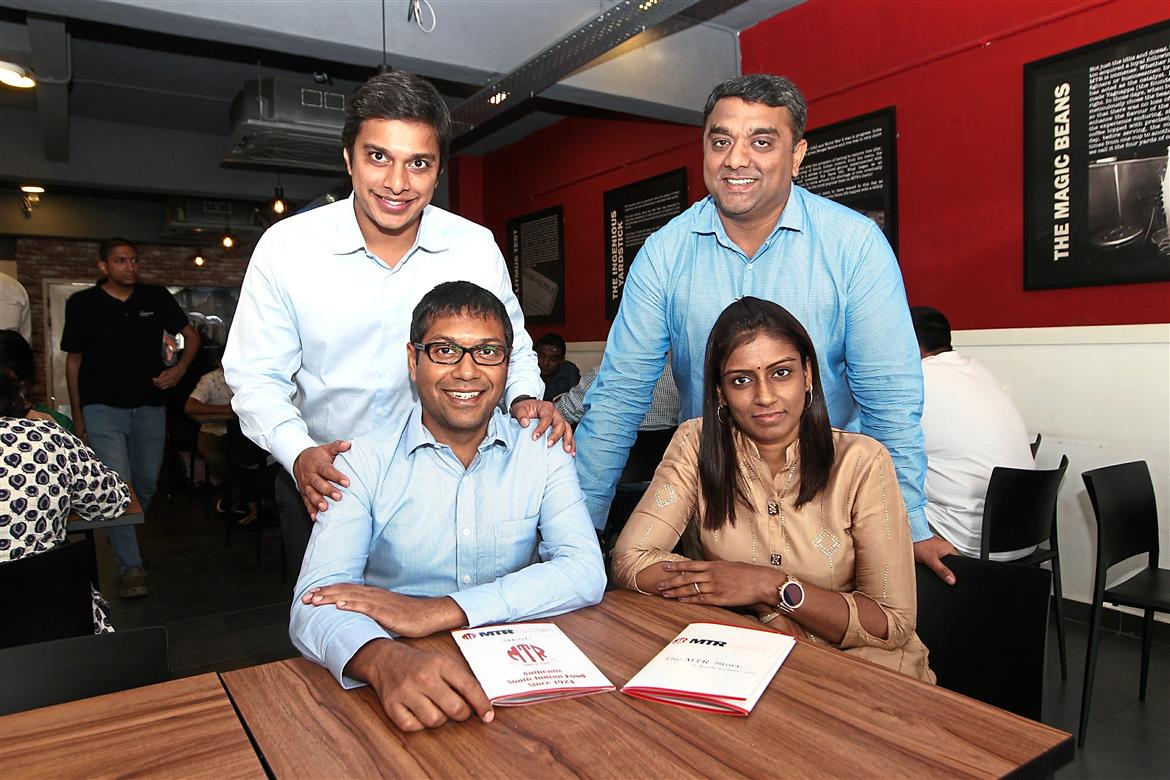 In India, MTR’s restaurant business is still run by the third generation of the Maiya family, who are very particular about the people they partner with.

“Vivek, myself and Arvind have known the MTR Maiya family very closely for a long time, and that’s one of the key reasons they partnered with us. It’s a brand that means a lot to a lot of people in Bangalore, so they’re very careful with who they partner with to take the brand forward in different geographies. We’re very happy to be doing it in Kuala Lumpur, where the culinary scene is vibrant,” says Adarsh.

The first Malaysian MTR outlet is nestled in the densely-trafficked area of Brickfields and is simple and modern, with historical information about the brand posted up on the walls. Interestingly the eatery also boasts an open kitchen, an almost unheard of concept for an Indian restaurant. 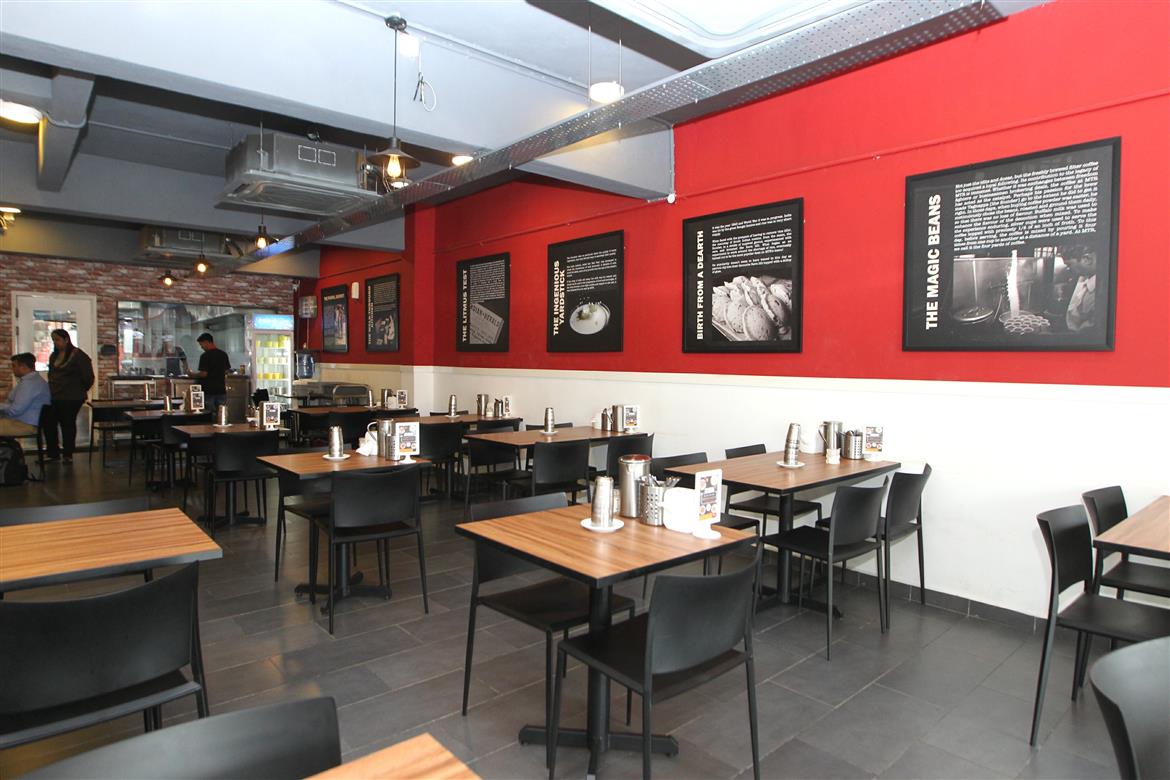 The interior of MTR is modern and simple with lots of information about the eaterys rich history displayed on the walls.

Evidently, this kitchen is MTR’s pride and joy. It is spotless and well-structured, much like the original MTR in Bangalore, which featured a purpose-built walk-in kitchen to show patrons just how clean it was!

This sense of discipline and attention to detail filters down to all areas of the restaurant, including the cooks, who have all been trained in the main restaurant in Lalbagad, Bangalore for a minimum of seven to eight years (they spend two years just learning how to make tosai!) and are put through the wringer in Bangalore, often catering for up to 4,000 people on weekends! 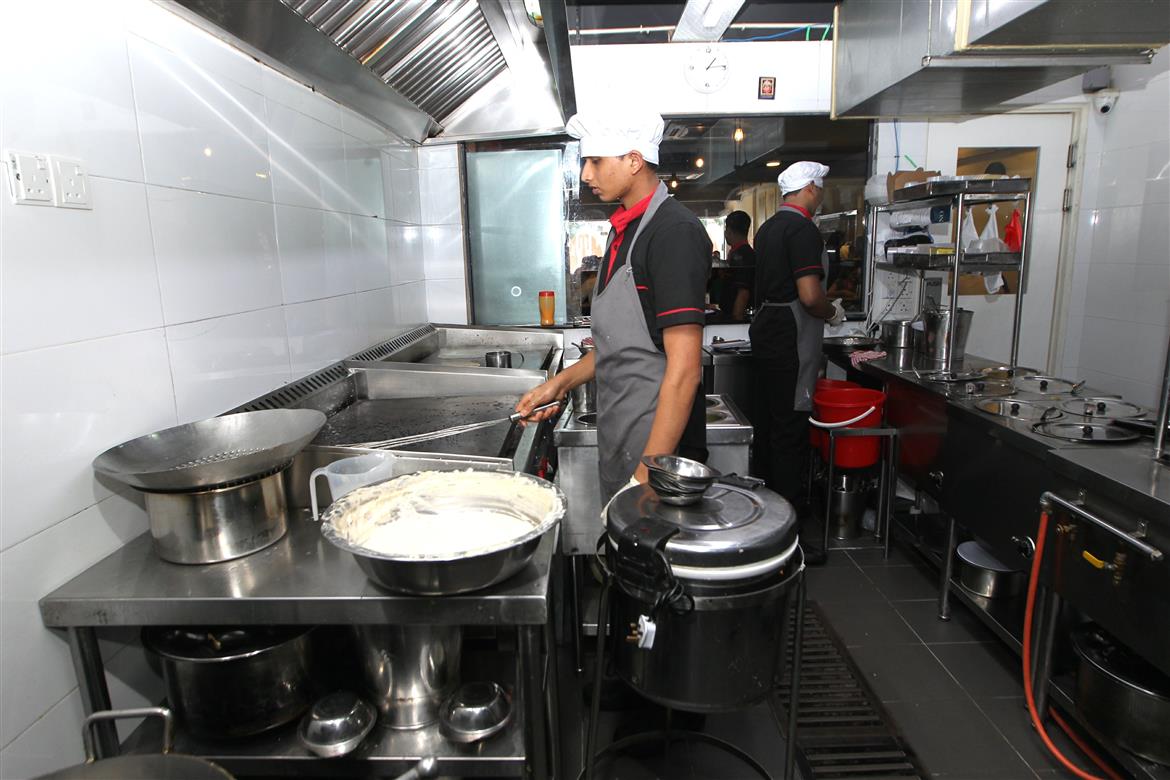 Hygiene and sanitation are very important at MTR, and the kitchen is kept spotless.

Given the cooks’ extensive training, it isn’t suprising to learn that MTR’s specialty tosais and idlis are all made fresh in small batches and cooked to order. Each tosai variant is custom-made with different batters, which means no two tosais will ever taste the same.

“Every tosai is different right from the batter and that’s what lends exclusivity to MTR,” says Vivek.

The Malaysian outlet stays as close to the original as possible, so only vegetables, grains and pulses are locally-sourced while spice mixes and everything else is sourced directly from the central kitchen in Bangalore which makes them from scratch without preservatives to be sent out to all the MTR restaurants everywhere.

“We ensure that even the spices that come in are not kept for more than 45 days even though the shelf life is three months. So every 45 days, we get a new shipment even though it costs a lot of money. But we have agreed to follow that and I think it is reflected in the taste,” says Vivek. 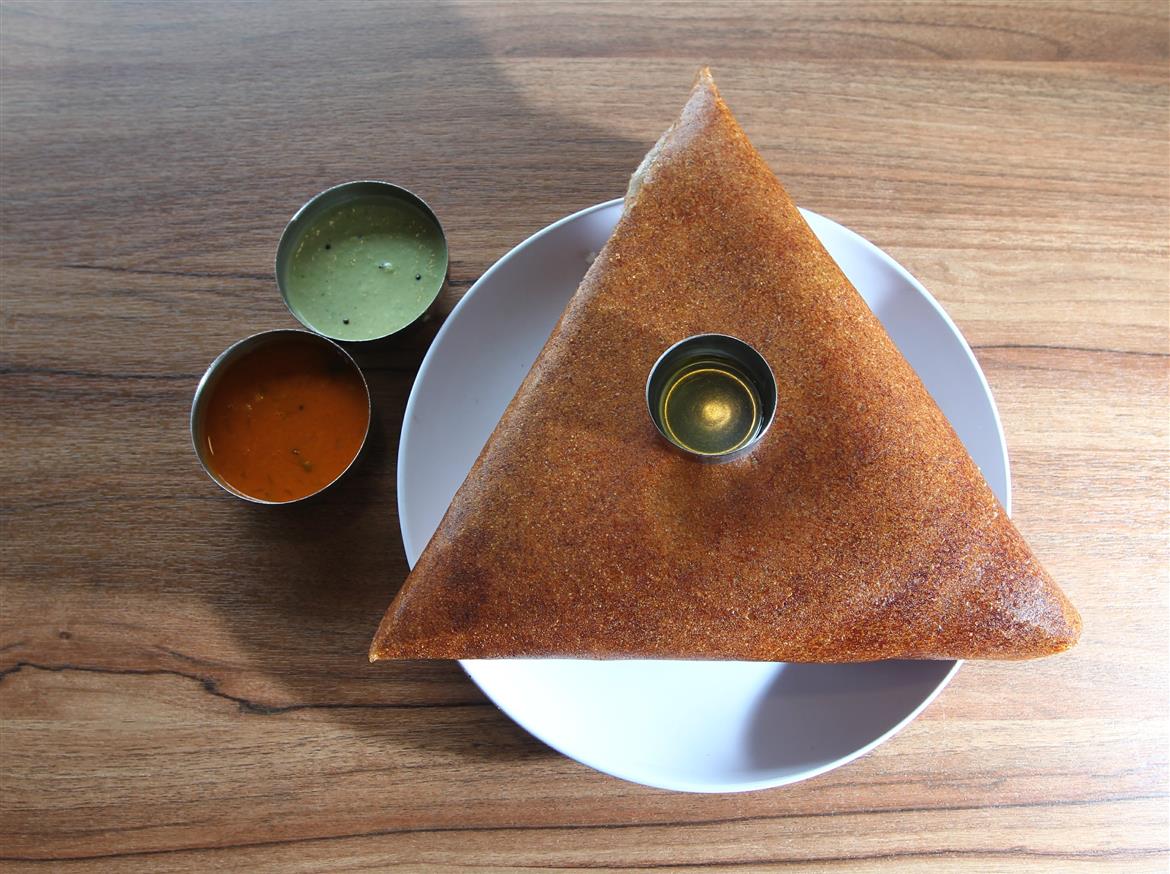 The beautifully cooked masala tosa is awe-mazingly crispy and tastes even better with a drizzle of ghee on it.

To start a meal at MTR, definitely opt for the Masala Tosai (RM8.50), which is stuffed with spiced potatoes. On the side is a thimble of fresh ghee (a signature MTR element) which you can pour over your tosai for a shot of decadence. All the tosais are served with ghee as well as a green chilli-infused chutney and a lentil sambar.

MTR’s masala tosai totally lives up to expectation, delivering a perfectly thin, crispy crepe that is incredibly delicious, especially when paired with the opulent ghee and soft, cottony potatoes. 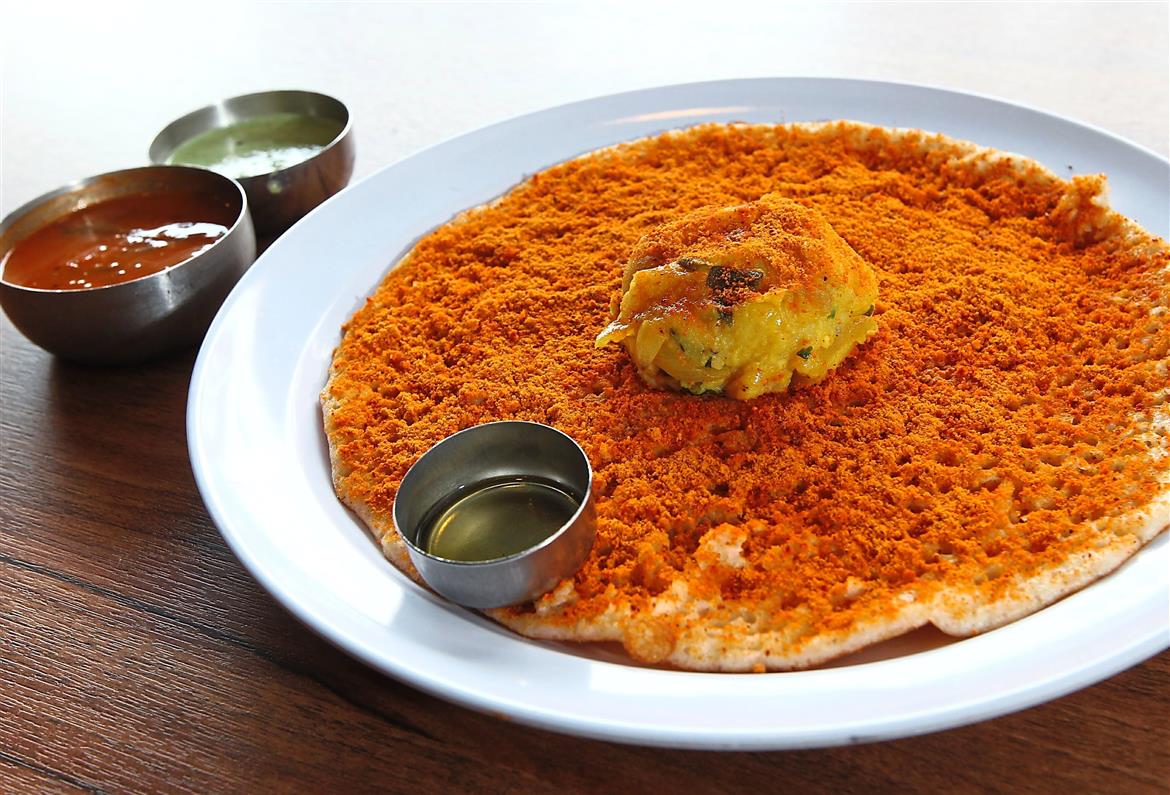 Available only in Malaysia and Singapore, the pudi tosai was created in Singapore and features chutney powder sprinkled over a thick tosai.

The Pudi Tosai (RM10.50) meanwhile is an original concoction devised in the Singapore MTR and currently only available in Malaysia and Singapore. The thick crepe is silken soft and dotted with tiny pores, with a chutney powder made of turmeric and other spices layered atop. The powder is slightly spicy and akin to smooth sand, offering an enhanced textural exploration that you’re likely to find immensely addictive.

One thing you’re likely not to have tried anywhere else is MTR’s Rava Idli (RM7.50) an invention that founder Yagnanarayana came up with when rice was in short supply during World War II. To combat this, Yagnanarayana modified his idlis with semolina flour (rava). This idli is a thing of beauty, studded with coriander, cashew nuts, curry leaves and mustard seeds and infused with yoghurt, resulting in a light, flavourful meal that is incredibly easy to digest and equally easy to fall in love with. 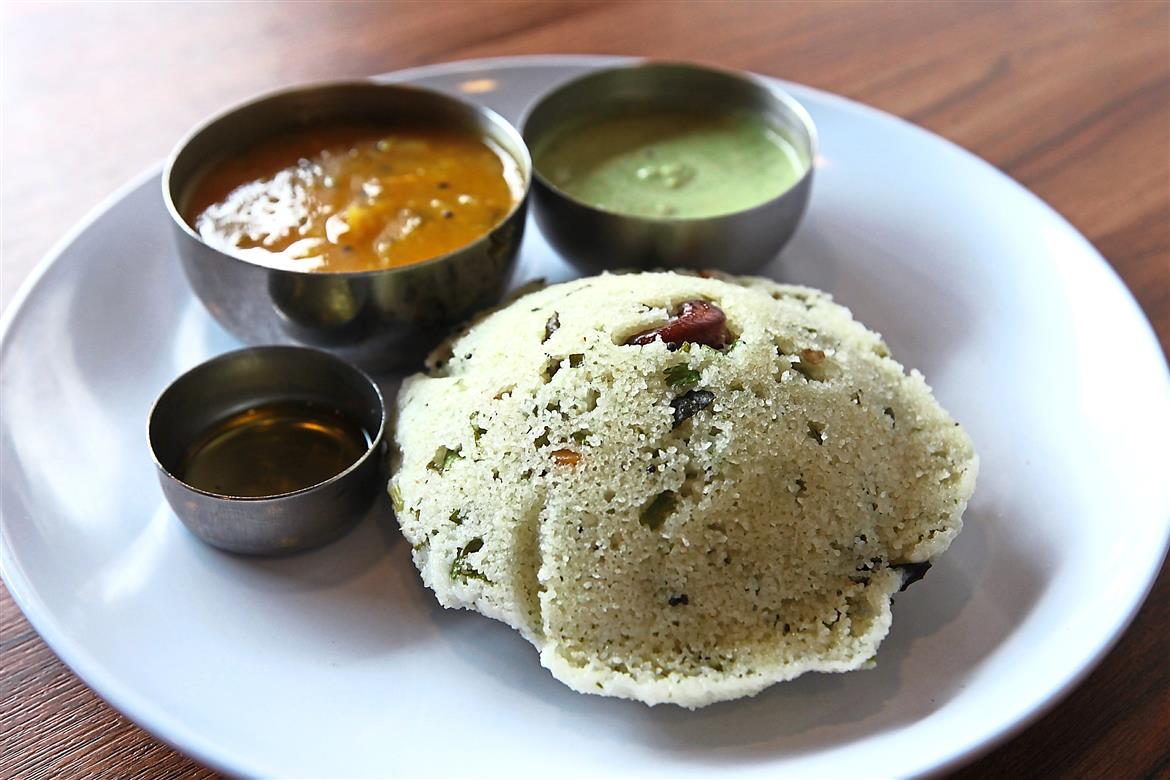 One of the highlights at MTR is the rava idli, which was apparently invented during World War II.

In many local eateries, vadais are fried in large batches and left out for long periods of time, which means by the time you bite into one, it’s cold, soggy and utterly unappetising. If that’s been your experience so far, trust me when I say you’re going to absolutely adore the Uddin Vadai (RM6.60), which is so crispy on the outside, you can hear a distinct crackle when you tear into it. The interior is equally appealing – soft and incredibly airy.

“I think there’s something about the air in Malaysia that has contributed to the vadais here, because even the founding family – the Maiyas themselves – said this is probably the best vadai in all the MTRs we have,” says Adarsh.

MTR also offers lunch and dinner special mini meals (RM18) with samples of different dishes in a thali setting. The set comes with rice as well as a choice of puri or tosai. Although most of the dishes change daily, some remain mainstays like the bisi bele bhath, which is unique to Karnataka and is like a hot, nourishing Indian porridge made with lentils, vegetables, spices, curry leaves and tamarind pulp. 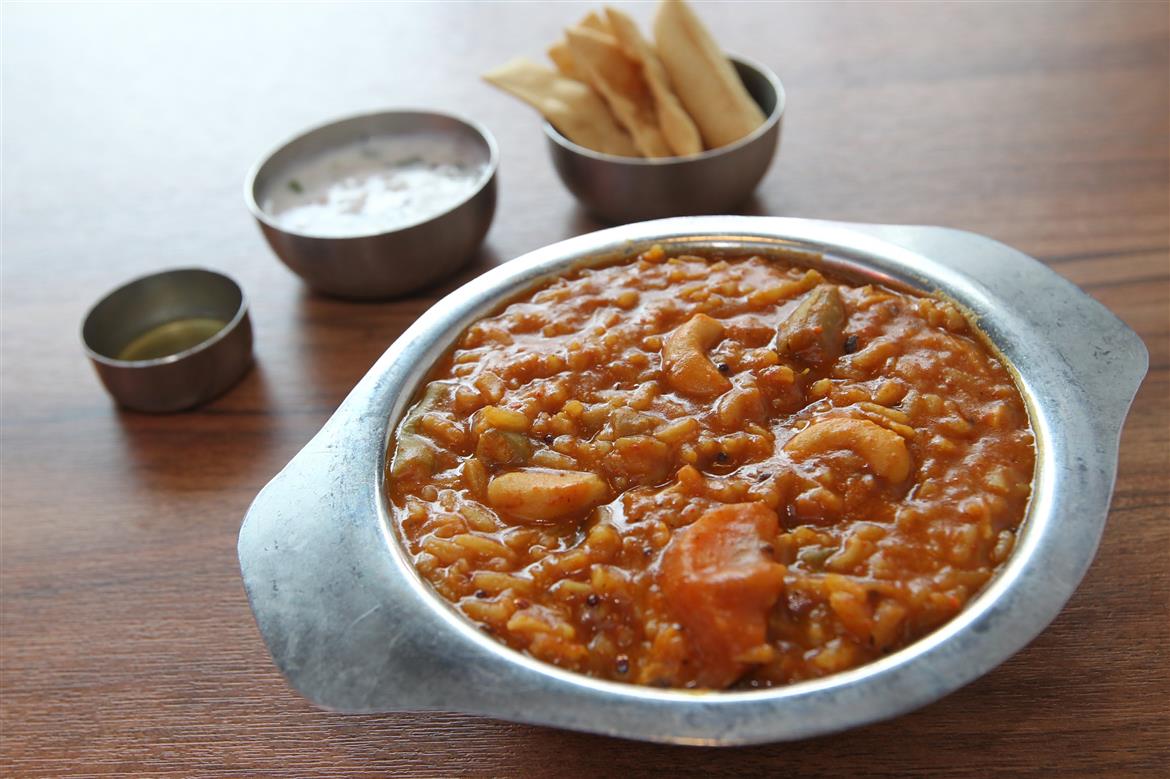 Akin to a sambar, with a texture like porridge, the bisi bele bhath is a uniquely Karnatakan dish that you can savour as part of the mini meal or on its own.

Curd rice is another permanent feature of the set and is traditionally eaten at the end of a meal to help with digestion. MTR’s version is delightful – the yoghurt is thick and suitably sour with rice floating in this yummy mixture.

From the dessert options, try the Badam Halwa (RM9.50), made from crushed almonds, thickened milk cream, clarified butter and saffron. This is one of those sinful temptresses that you’ll be hard-pressed to stay away from – it is rich, indulgently creamy and oh-so satisfying. 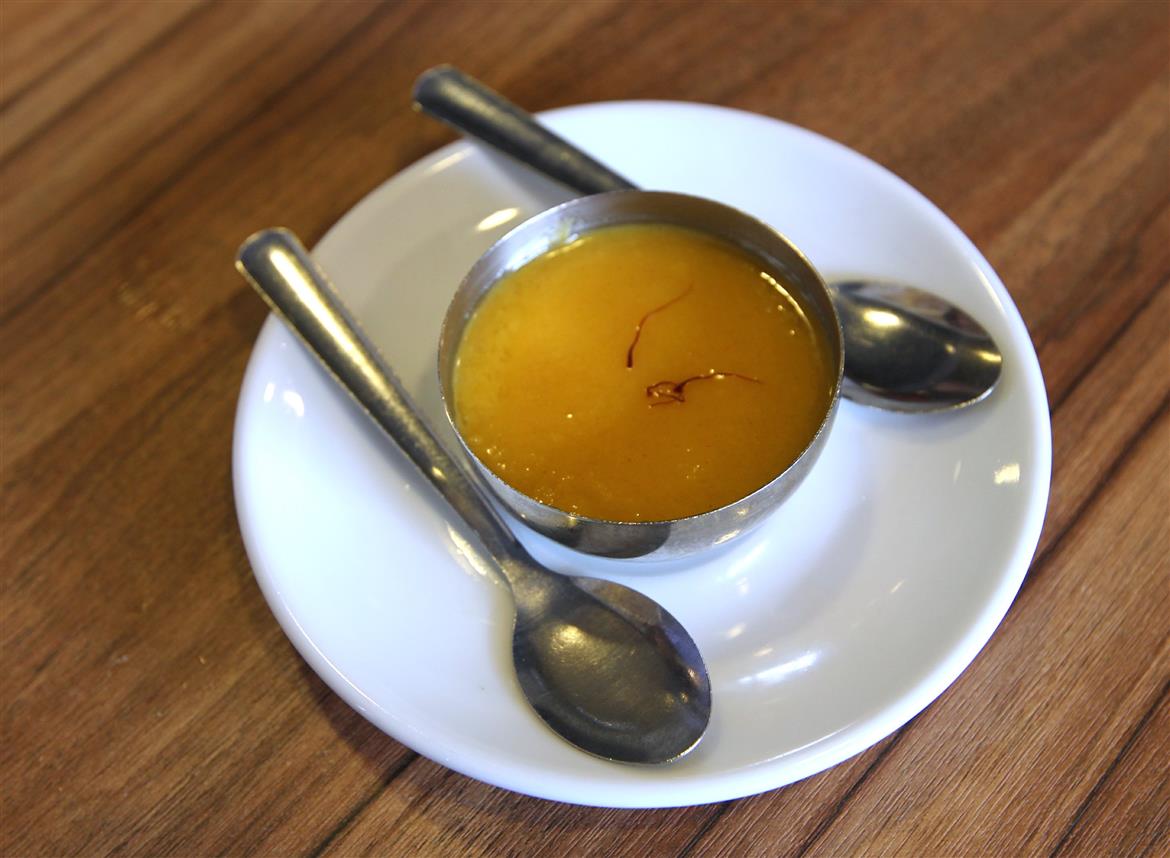 The sensual, elegant badam halwa is a show-stopper that is intoxicatingly good.

End your meal here with a glass of MTR’ s iconic filter coffee (RM5.20), which still uses the same Arabica coffee beans sourced from a single estate coffee plantation in Chikmagalur in Karnakata for the past 60 years! The coffee is suitably robust, full-bodied and pronounced – a great denouement for coffee lovers everywhere. 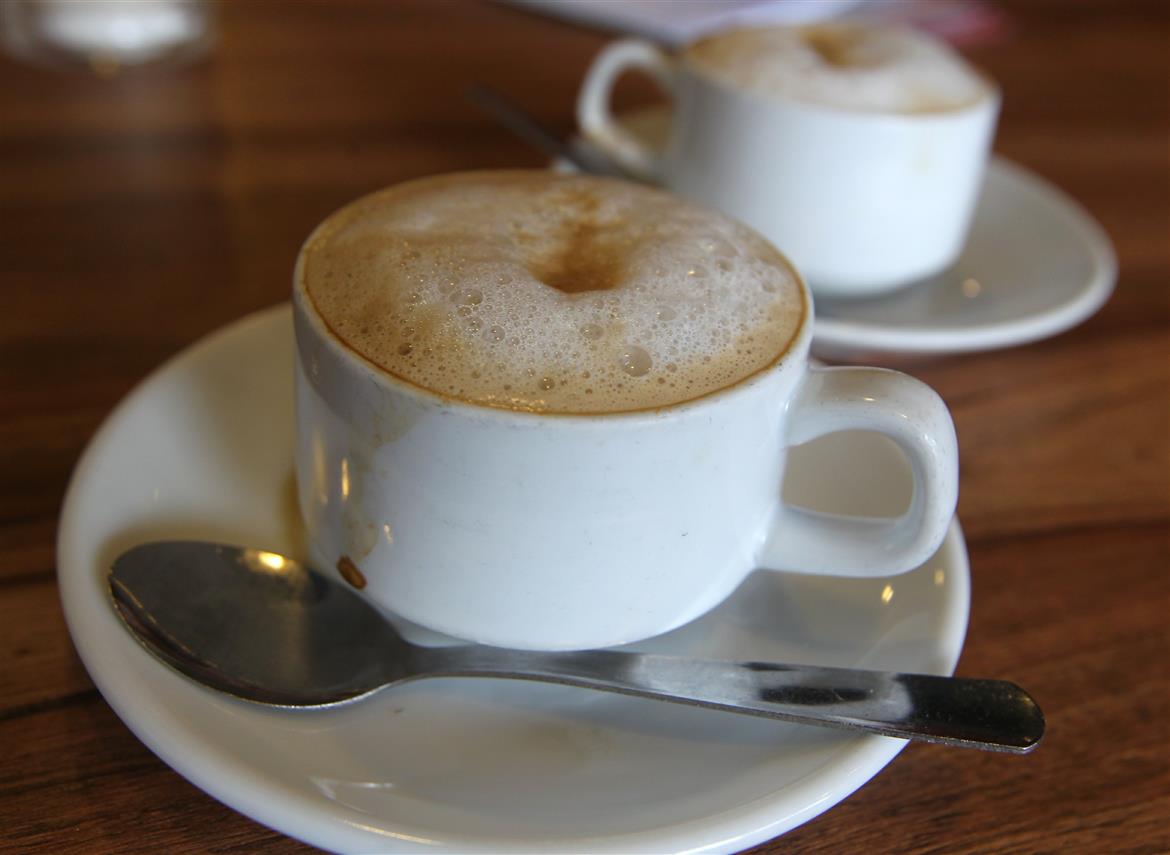 MTRs filtered coffee is made fresh using coffee beans sourced from a single estate coffee plantation in Chikmagalur in Karnakata.

MTR has been immensely popular since it opened in KL – on most weekday afternoons, the eatery is bursting at the seams and on weekends, you’re lucky if you can get a table (MTR doesn’t take reservations) as queues tend to be 10 to 15 people long outside. Thankfully, this success has spurred the directors to forge ahead with plans to open more MTRs in Malaysia.

“We will definitely look at expanding in our second year here, but we will be thinking of the right options that would work out for us,” says Vivek.