Lamb skewers are cooked at the table at Songhwa Yanggochi near Konkuk University in Seoul. Photo: Jo Turner

For years, lamb and mutton were considered unpalatable by Koreans – too strong, too smelly, not to mention too cute while prancing through the fields. Meat consumption was limited to beef, chicken, pork, sometimes duck, and very occasionally dog. But a booming Korean-Chinese population has got the country into the swing of lamb.

"When it started we aimed for Chinese people, but then they brought their Korean friends to the restaurant," says Lee Hang-yung, a Korean-Chinese worker from Heilongjiang Province who lives in Seoul. "And people's tastes slowly changed, and that's what's happened here."

Lee speaks Korean with a Chinese accent, and though he is ethnically Korean, he is, like most of the workers and owners on this street, a Chinese national, born and raised in the People's Republic.

He is part of a growing minority in South Korea called – sometimes derogatorily – Joseonjok, a name that references a former Korean kingdom. Like ethnic Koreans from the former Soviet Union, Korean-Chinese are not granted automatic right of return in South Korea the way Korean-Americans, Korean-Japanese and many other ethnic Koreans are. 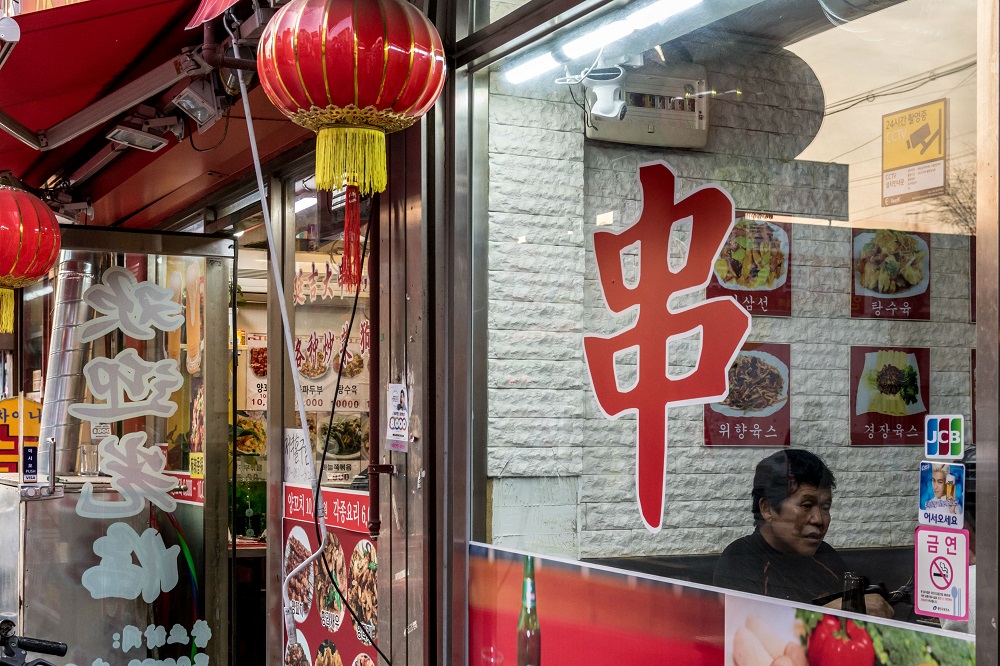 Chinese characters on a restaurant window announce that Korean lamb skewers are served at the restaurant. Photo: Jo Turner

Still, since the re-establishment of ties between South Korea and China in the early 1990s, Korean-Chinese have come in large numbers, usually to work the dirty, dangerous and difficult jobs local Koreans won't do. Like immigrants the world over, some open restaurants, and Chinese lamb has proved to be the safest investment.

The flavours are a bit different, but the dish is basically the same as in China.

Yanggochi, meaning lamb skewers, are cubes of skewered lamb barbecued at the table over hot coals. Holding the skewers together while turning them is quite a skill, and as a result, most restaurants now have a machine that automatically rotates the skewers.

"In China, the yanggochi is prepared with the fat and the meat together," Lee says. "But here it's more like galbe," referring to common Korean barbecue, with the fat trimmed from the meat. The meat and the seasoning is much less strong than in China, to cater to Korean tastes. 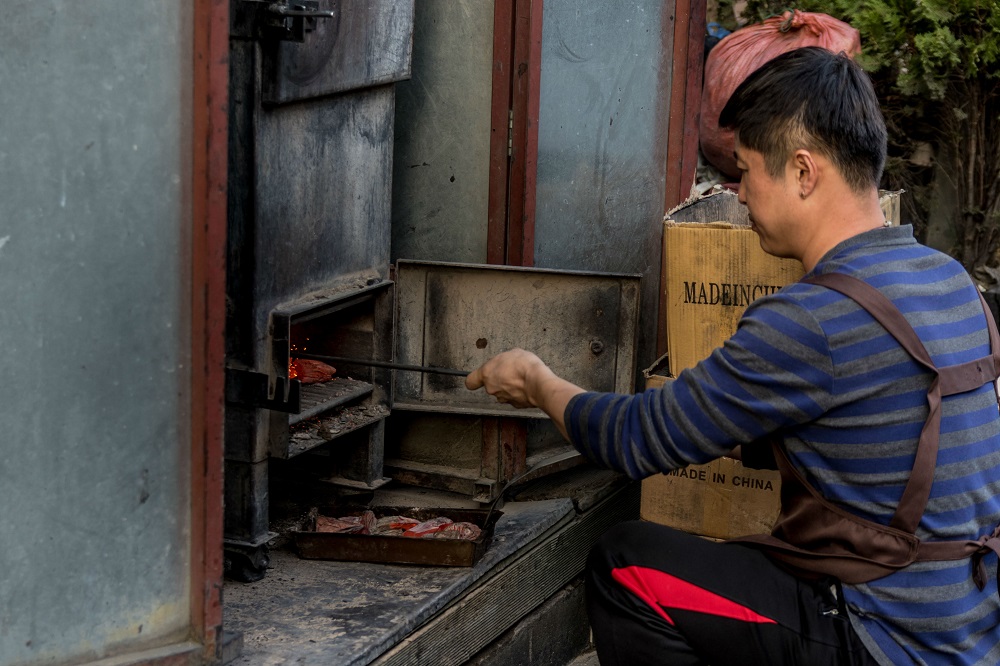 A worker stokes the coals at Gyeongsong Yanggochi, the oldest lamb restaurant on the block. Photo: Jo Turner

Once the skewers are cooked, they're placed on a rack above the heat to cool, then dipped in a seasoning of red pepper, cumin, parilla, mustard seed and other spices. There is a bevy of side dishes that can go with it, including steamed dumplings, mapo tofu in hot and sour sauce, peanuts, cubes of radish kimchi, and thick sliced tofu with chili sauce. The lamb can be wrapped in ggotbbang – literally, "flower bread", or mandarin rolls – a rolled, steamed bun, along with zha cai, pickled mustard plant stem.

For drinks, Chinese Tsingtao beer is a must for most patrons – a series of ad campaigns and clever product placements have made yanggochi and Tsingtao inseparable. Goryangju, a very potent clear Chinese liquor, is also popular, as is Korean soju.

Korean lamb restaurants can be found all over this restaurant-dense city. The trade magazine Meat & Livestock Australia noted in a report this February that Australian mutton and sheep exports to Korea have risen sharply year-on-year over the last six years. 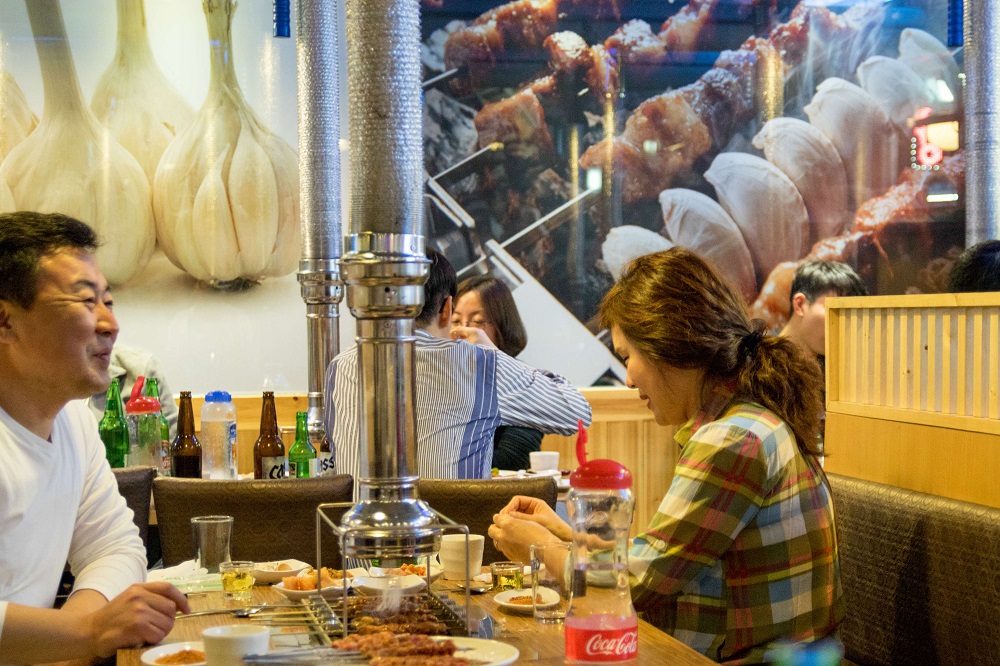 Yanggochi has spread well beyond its initial market of Chinese living in Korea; 80 to 90% of customers are now Korean. Photo: Jo Turner

The report says that despite a continued "general negative perception" towards lamb, "the market's younger generation is more willing to try new flavours, and there has been an emergence of Chinese-influenced lamb barbecue and skewer restaurants in Seoul, commonly frequented by male consumers in their 30s to 40s." Australia is the source of 94% of South Korea's sheep meat.

Yanggochi recently also got a boost when celebrity TV chef Baek Jong-won recommended it on his TV show a few months ago.

"In the past, our customers were all Chinese, but now it's 80 to 90% Koreans," says one young woman who works at Kondae Yanggochi, and declined to provide her name. "I think they've been trying yanggochi, have gotten used to it, and now they really like it." – Reuters/Zester Daily