Even those who don’t love vegetables will be smitten with the Pagoda of Dreams, pan-seared eggplant layers and seafood cream.

It was a dish that set off a thousand iPhone camera flashes. Unveiled several months ago by Chef James Ho, six shrink-rayed versions of Hainanese chicken rice, nasi lemak and mango sticky rice – with absurdly teeny ingredients like baby chunks of chicken and sunny-side ups no bigger than a fingernail – caused an online stir due to their small size and big flavours.

“We wanted to do something that could go viral. The moment I laid my eyes on Ho’s creation, I knew this was it. Our signature.”

What fans of Ruyi & Lyn didn’t know – despite Instagraming and Tweeting the dish like it was the second coming – was that the sushi’s cool factor was almost jeopardised.

“It was almost called ‘Mimpi Baru,” Siew explains. “My dad suggested it but, oh my god, I said no way. Can you imagine if it had that name?”

The headstrong and vivacious 32-year-old left a career in Germany late last year to start this sprawling new establishment in Bangsar Shopping Centre.

One Malaysia, a tinier reincarnation of the wildly successful Ruyi's Sushi, and a compilation of three ethnic dishes.

“You know what it’s like to work with a family member. My dad is traditional in every sense of the word and I’m quite the opposite.” So far, however, these inter-generational clashes and no-holds-barred exchanges have been nothing if not good for business.

Tucked away at the topmost floor of BSC, Ruyi & Lyn is a culinary contradiction. While it isn’t too far from the type of banquet Chinese restaurants that serve so obviously as its inspiration (thanks to dad), the lights are lower, the crowd is younger and more beautiful, the mood is sexier, the leather menus are LED-lighted and the music is sonically jostled.

A modern spin-off of the traditional banquet restaurant, Ruyi & Lyn fuses lounge, bar and restaurant into a hip and sexy space, thanks to the urbane sensibilities of its creator.

Incidentally, the place turns into a club come 11pm on weekends, complete with a deejay and all.

When it comes to the food, old and new ideas do the tango, resulting in a number of compelling creations.

Siew, you see, has found a willing and talented sidekick in Ho — a Negeri Sembilan-born, globally-trained serial workaholic — who pays ample respect to tradition and yet takes wild, flagrant liberties with it in the kitchen.

Even those who don’t love vegetables will be smitten with the Pagoda of Dreams, pan-seared eggplant layers and seafood cream.

Innovations include the Pagoda of Dreams (RM38), a pan-seared eggplant mille-feuille layered with a riotously creamy seafood chowder. It’s merrily inauthentic and you can’t help but laugh while eating is because of how well it plays out.

Splashing around in a gentle aromatic pool of truffle oil and fried garlic, the tender, smoky charcoal-grilled duck with whippet-thin slices of cucumbers in Donald & His Cucumber (RM33) is a masterful cover of a Chinese-style duck dish and the very definition of crave-able.

And though not characteristically Chinese, the Taizi’s Dish (RM98), or pan-seared foie gras nestled atop a glossy pink mass of watermelon, is riveting, with a startlingly well-calibrated mouthfeel of crispness, coolness and smoke.

While the menu is teeming with such surprises, a number of clichés – like the section devoted to shark’s fin, abalone and sea cucumber – also make their appearance, no doubt at the insistence of Siew Senior.

This doesn’t mean that the dishes themselves were bad – there is not a bad dish in the house, at least none of which I’ve tasted.

The Chinese staple of sauce-drenched and seafood-speckled egg noodles comes with a modern twist in Ying & Yang.

A Chinese chain restaurant heiress armed with culinary smarts and world wisdom, Lyn Siew is set on blazing her own trail with the newly imagined Ruyi & Lyn.

The Ying & Yang (RM48), a Chinese staple of sauce-drenched and seafood-speckled egg noodles, may not possess a wow factor, but it’s still crafted with finesse. There’s some thrill to be had from pouring the sauce from a teapot and attacking the crispy noodles – which arrive looking like a sculpture– with your chopsticks.

It’s amazing how such a massive restaurant – Ruyi & Lyn is staffed by 70 chefs, servers and bartenders – could consistently dole out such stunners.

Service – helmed by experienced multiple-language-speaking manageress Cindy Chee – is also second to none.

Perhaps, having grown up surrounded by good food – her grandmother started the Tai Thong chain of restaurants – Siew has developed a keen sense of culinary wisdom that has enabled her to quickly sniff out potential disappointments.

Still, one cannot help but feel that the chef has run out of creative steam with Ruyi’s Sushi’s second reincarnation – the kitschily named One Malaysia (RM43) – which arrives at the table looking like ant food (it’s one-third the size of Ruyi’s Sushi).

He has substituted the mango sticky rice with roti canai, briyani and mini papadoms, but these seem to be lacking in vibrancy and ferocity compared to its original, real-sized versions. On the other hand, why change a winning formula?

It might look trippy and radioactive, but Summer Breeze, a dessert of cucumber sorbet with coconut ice cream and yoghurt, is heavenly.

But this niggling doubt is settled with the arrival of Summer Breeze (RM26), a crazy-looking dessert of neon green cucumber sorbet shavings that’s piled like snow atop some coconut ice cream and a disc of tangy yoghurt. It’s so invigorating and delicious you’re tempted to go for seconds – even though you’re never a fan of desserts.

With all things considered, Ruyi & Lyn is the type of restaurant that needs to come with a warning: food is served banquet-style, in large portions, and it’s easy – way too easy – to eat more than your fair share here. But don’t be guilty because you won’t be the only one. 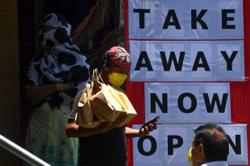 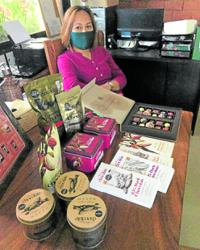