The orang utan needs our care and attention

Scientists say stepping up research on the orang utan will drive home the need to better protect this great ape.

The orang utan might share nearly 97% of man’s DNA yet there is much that we do not know about this great ape. Nevertheless, its existence in our backyard is advantageous to Malaysians – so we should learn all we can about this species.

Last month, the First International Primate/Orang Utan Dialogue 2014: Survival Of Orang Utan was organised by Universiti Sains Malaysia (USM) and the Bukit Merah Orang Utan Island Foundation to initiate collaborative research among scientists on the primate. The two-day symposium in Penang also addressed the lack of local research, which suggests that we know less about our national primate than we thought.

School of Biological Sciences ecology professor Mashhor Mansor, who also sits on the trustee board of the foundation, laments that there is not enough research by Malaysians on the orang utan’s survival in the wild, and that has resulted in insufficient scientific output to lay out the environmental grounds for their conservation. 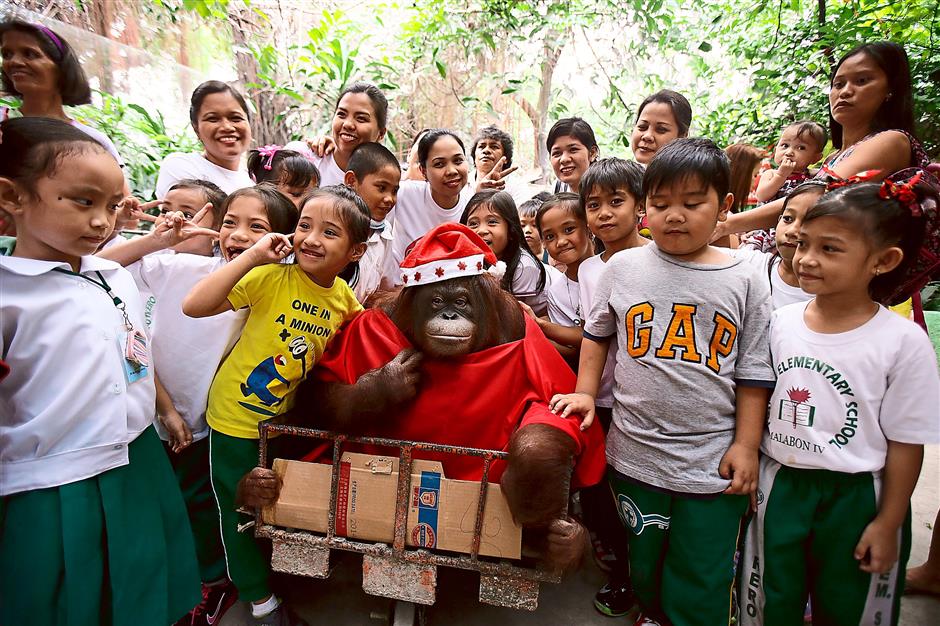 An orang utan dressed in a Santa Claus costume at Malabon Zoo in the outskirts of Manila, The Philippines. Such inhumane and unethical treatment of wildlife is still commonplace in zoos despite protests by activists. — EPA

“How many sites in Malaysia are gazetted for orang utans? We have identified the areas in Sabah, Sarawak, Kalimantan and Sumatra which they populate, but are we doing enough to protect their populations and habitat? Little government funding goes into orang utan research. This begs the question: Are we guilty of not urging policy-makers to channel the funds to where it is needed or of producing half-baked reports?” says Mashhor. Prof Mashhor of Universiti Sains Malaysia says not enough research is being done on the orang utan.

Mashhor says what is even less studied is the orang utan’s ecology and psycho-social behaviour in the wild, such as nesting and mating habits.

“We know the basic stuff, such as that the mother-and-infant relationship lasts until the infant reaches the age of six, and that orang utans can indicate a forest’s health simply because plants are germinated from the seeds they have eaten and passed out. But a lot of aspects have still not been studied. Observations have to be done on long-term basis. Who will fund the research? It’s no wonder we don’t know much about our own animal cousin. In fact, there are people who think orang utans are monkeys!”

Mashhor has funded trips to Batang Toru near Medan, Sumatra, since last year in partnership with Universitas Sumatra Utara. They have documented 35 species of apes and monkeys there, which is one of the highest density of primate species in the world. They are also studying a group of genetically-unique orang utans found south of Lake Toba, which differ from the ones found north of the lake. Since May 2013, they have been doing weekly population surveys at Bukit Lawang in Mount Leuser National Park. For sites in Sabah and Sarawak, his study trips are done jointly with Sabah Parks and Sarawak Forestry.

University Malaya biologist Lim Tze Tshen says many are not aware that orang utans used to exist in Peninsular Malaysia until they became extinct about 33,000 years ago. Fossils dating to that period have been discovered in Batu Caves, Selangor. In Lenggong, Perak, dental remains dating back over 500,000 years were found in Badak Cave. 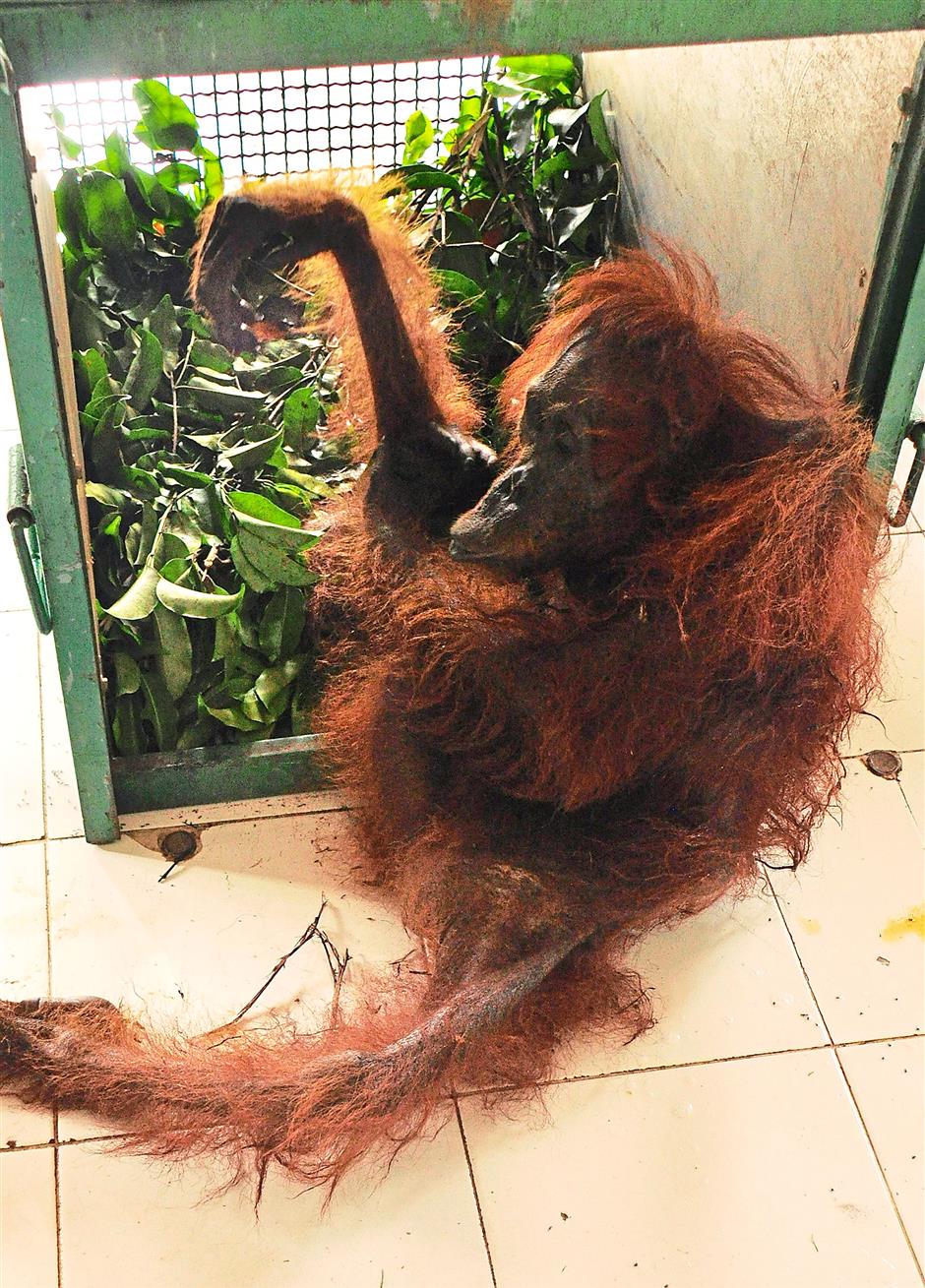 Despite being a totally protected species, orang utans are still persecuted. This injured and malnourished female orang utan was found in an oil palm estate in central Kalimantan on Dec 4. She had broken limbs and 40 shotgun pellets in her body. She did not survive despite medical care given by the Borneo Orangutan Survival (BOS) Foundation. – BOSF/AFP

“Pongo materials were also recovered from a small cave in Kinta Valley, Perak. However, as sampling has been limited so far to the west of the Titiwangsa Main Range, there isn’t a comprehensive framework on the evolutionary history, geographical dispersal and final extermination of orang utans from Peninsular Malaysia,” he says.

Primatologist Dr Tetsuro Matsuzawa from the Primate Research Institute of Kyoto University, Japan, cautions against over-dependence on the estimated orang utan population of 10,000 to 100,000.

“More precise information will be needed on their survival (coping ability) in the wild. Malaysia should be proud to host this species which can’t be found anywhere else but in Indonesia. By recognising orang utans, you see what is unique in humans. We can learn about ourselves by carefully watching them.”

Matsuzawa who is president of the International Primatology Society, has made chimpanzees his subject of research for the past four decades. He says the Primate Society of Japan has been in existence for 30 years, and calls on Malaysia to start its own chapter so that orang utan research can be intensified, and other non-human primates (Malaysia has 24 species of these) can be studied too.

“If we are truly concerned about conserving orang utans, we should also pay attention to those in captivity, since wild ones are not always accessible. This means we should have a proper database of numbers and public disclosure of information. In Japan, we know all of our apes in captivity, and every single one of them is accounted for. Their data is available in the Great Ape Information Network website for everyone to view.” He says Japan has 320 chimpanzees (in 51 facilities), six bonobos (one), 25 gorillas (9), 47 orang utans (21) and 173 gibbons (41).

Dr Sri Suci Utami Atmoko from Universitas Nasional in Jakarta who has studied orang utans for some 30 years, stresses that research has to be a key component of conservation as actions can then be executed according to the prevailing level of threats, and information such as orang utan distribution, density and demography can be obtained.

“For example, we learnt that orang utans use large forest areas ranging from 200ha to 3,000ha and they build covers to keep out sunlight, as seen in Sabah, Bukit Merah in Perak and Ketambe, Sumatra. Orang utan research in Indonesia started in the 1970s. A vital progress was the 10-year National Strategy and Action Plan for Orang Utan Conservation (2007-2017) that is evaluated almost yearly.”

Dr Jamartin Sihite, chief executive officer of Borneo Orangutan Survival Foundation (BOSF) that rehabilitates Bornean orang utans and releases them into the wild, says the number of rehabilitation centres is indicative of what has gone wrong with the current conservation approach.

“Wildlife shouldn’t be in rehabilitation centres in the first place. It shows how many of them have been rescued from poachers or were translocated. Our estimate of surviving wild Bornean orang utans is about 54,000, a population that has been reduced by 70% since 1990,” says Sihite. 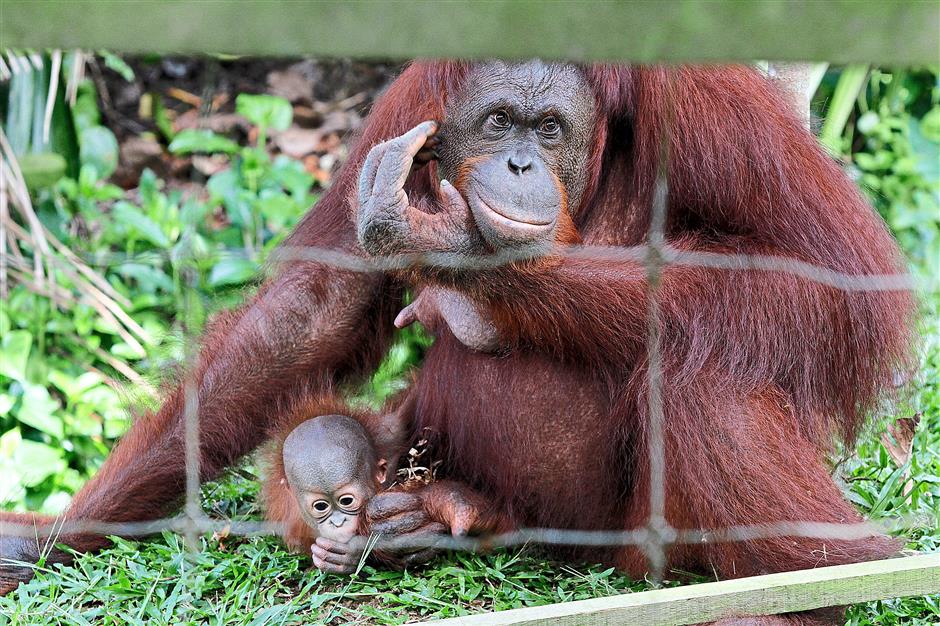 An orang utan mother is protective of her infant at the Bukit Merah Orang Utan Island near Taiping, Perak. – LIM BENG TATT/The Star

BOSF has helped save some 2,200 orang utans since it was established in 1991, mostly from confiscations, rescue work and translocation from conflict areas. It still has 750 orang utans in two centres in Kalimantan, and have released 162 into the forest since 2012.

“The challenge for the release is finding a suitable and safe forest. We also have to conduct DNA tests so that the three subspecies (of Bornean orang utan) are not mixed in a location that has only one subspecies.”

Dr Ramesh Boonratana, the regional vice-chair of the IUCN-SSC (Species Survival Commission) primate specialist group, warns that more than 60% of primates in Malaysia today are in danger of becoming extinct.

“We are losing these animals faster than before to new sets of problems that have evolved. Despite commendable solutions and conservation efforts, orang utans continue to decline, which triggers the question ... should we re-prioritise our approach? For instance, better equipping and compensating forest rangers, harnessing technology for surveillance, increasing penalties, providing incentive to enforcers, and repatriating illegally-obtained orang utans. “There are some being kept as pets in countries overseas, so what are we doing about it? Repatriation could be included in multi-bilateral agreements,” says Boonratana, who is in the panel of advisor for the Bukit Merah Orang Utan Island Foundation.

Following the dialogue, Mashhor is hopeful that a centre can be established in USM as a global reference point for orang utan academic studies.

“I’m positive this will pave the way for new discoveries. We need more funding support and pride for a truly iconic Malaysian species.”

A forested enclosure keeps things wild for these orang utans