The iPhone of folding bikes?

I LEARNT that not all folding bikes are created equal at a Paris Metro station two years ago.

The attendant had simply shook his head when I asked if I could bring my largish bike in. But shortly after, inside the station, I saw someone breezily wheeling along what looked like a small pram.

It was a Brompton.

This bike is famous among cyclists as having the most compact folding mechanism among the many foldies in the market. It’s also one of the last “real” products still actually “Made in England”, and it’s something of a cultural icon. The Brompton has tiny little ‘Ezy Wheels’ that make it easy for a person to roll it around a train station. Its compact size allows it to be carried into a train or LRT like luggage.

After all, when British Prime Minister David Cameron was in Shanghai in December, he chose to visit a Brompton shop there to showcase the capability of British business.

James May, from the motoring show Top Gear, once said:

“I think Bromptons have always been a bit of a cult, and the owners are a bit evangelical about them. There are folding bike pretenders, but the Brompton folds most convincingly. That’s the point of a folding bike.”

“When I bought mine (years ago), Bromptons tended to be ridden by oddballs, engineering lecturers, that sort of person. Now they seem to be very fashionable.”

Or, as Ted Johnson writes in the cycling advocacy site www.commutebybike.com. BC Sia bought a Brompton after earlier frustrations with the folding mechanism of a cheaper bike.

“The iconic (British) band The Sex Pistols didn’t invent Punk... But when Never Mind The Bollocks was released in 1977, their contemporaries looked at the high bar The Pistols had set and asked, ‘What are we going to do now?’

“The basic Brompton design was developed the same year, in the same country, and bike makers are still asking the same question,” says Johnson.

“And like Apple, a community/cult has developed around the bike. I imagine it’s nearly impossible for two Brompton owners to pass each other without exchanging a knowing wave – or more likely, a secret signal.”

The article quips: “It’s the Brompton-as-religion that distinguishes the bike from its competitors.”

The bikes also hit the news in Singapore in July 2012 when a National Parks Board (NParks) officer was suspended after deciding to purchase 26 Bromptons (for S$2,200 or RM5,640 each) for his officers to conduct patrols along the island’s numerous parks. This raised eyebrows as much cheaper folding bikes were available. Pauline Lee wheels her bike straight into a café, folds it up and tucks it under the table.

For the longest time, Malaysian cyclists who wanted to lay their buttocks onto a “Brommie” or a “B” (as they are affectionately called), had to lug one back from official distributors in Europe, Hong Kong or Singapore.

Despite such inconveniences, the Bromptons gradually established a small invasion beach head which made its presence regularly at local cycling events. There is also a My Brompton Malaysia Facebook group which is run by Finty Yik, 36, a design consultant, who says there are over 150 members in it.

Much to the relief of its devotees, earlier this year Malaysia got its own official retailers: Pedalspot and Van’s Urban Bicycles, both based in Petaling Jaya (with branches elsewhere).

“Now, with the official retailers, we can get better technical support and more choices of bikes,” says Finty.

So, has a kind of “Brompton culture” developed locally? For one, the bikes are considered upmarket, as they retail locally for about RM5,000 to RM6,000 (the figures vary due to different specifications).

In contrast, the cheapest foldies at hypermarkets sell for just RM250. For RM1,000 – RM1,500, most cyclists consider that can get you a pretty good folding bike, including “branded” ones such as Tern or Dahon.

Ten Siew Yung, a 40-something educator, says there are some people who “talk and breathe” Brompton.

“Some riders in Malaysia have even named their steeds as Bromptimus Prime, Red Velvet, Goofy, Brie, the Englishman, Chilly and Ms Claret.”

Ten likes it primarily because of its compact fold. Moslim Othman and his family take his Bromptons everywhere.

“As I live in an apartment, I find it convenient to stow away. The small fold allows me to take it onto buses, trains or LRTs inconspicuously.

“All you need to do is to flip the rear wheel under the frame, wrap the front wheel back, drop the seat and drop the handlebars. With the small Ezy Wheels (on the back carrier), the whole folded package is transformed into a something like a compact wheeling box in just seconds. It is an engineering masterpiece.

“Having said that, there will always be Brompton haters as well. Just like we have the Apple and Samsung haters.”

BC Sia, a university lecturer in her 50s says she bought one after earlier frustrations with the folding mechanism of a cheaper bike. “Brompton culture comes from the ability to travel anywhere with the bike.”

Adib Noh, 62, an engineering consultant, recalls: “I once took my Brommie along to Xiamen (China). After exploring the alley ways and eateries, I rode up to a modern art gallery. There, I simply folded my bike up and wheeled it in.

“Neither the guard nor visitors raised an eyebrow and I was able to browse the paintings together with my bike leisurely. I couldn’t have done that with a bigger bicycle.”

Adib used to ride his Brompton around his neighbourhood in Bangi, Selangor to the sundry shop and the mosque.

“But nowadays, I ride a cheaper bike for that. I don’t want people to gossip. Sometimes during certain group rides, people do grumble that Brompton owners are trying to show off their expensive bikes.

“But I am not that kind of person. I like the bike because of the three Bs: British, Bicycle and Beautiful. And also the three 3Cs: Comfortable, Convenient and Compact.”

How do you get from the bus stop or LRT station to your actual destination? Do you haggle with imperious taxi drivers? Or walk?

Cities like Paris, Amsterdam and even Taipei have solved this issue by having bicycle rental kiosks at every major train or metro station. As Malaysia still lacks this, the only other option is to carry your own bike into and off the bus or LRT!

Lim Gene-Harn, a 20-something environmental consultant, says that he bought a Brompton not because of it’s a cult or status bike, but to commute to work. From his home, he cycles to the LRT station, where he folds it up to take on board the train. Upon arrival, he unfolds it and then cycles to his office.

“I use it to complement the LRT. The Brompton has a compact, yet smart, versatile design that makes it easy to carry or roll around. I have tried other foldable bikes, but they are too heavy or bulky for daily use.”

He adds that his bike also has a mount for his bag where he can put in his laptop and spare pair of clothes during work days (for changing into after a shower at the office).

This writer had heard that Bromptons were not meant to be “performance” bikes that could handle steep hills or fast riding. Yet, there were many stories of people who had done long cross country tours with it.

So I checked out some test bikes from Pedalspot and Van’s Urban. I found that the six gears on the bike were good enough both to tackle a steep climb up Kiara Hill in Kuala Lumpur and also to zip along speedily on flat roads – don’t be fooled by the small wheels, this bike can run as fast as 35km/h.

The gears could not match the range found on a high-end 27-speed road or mountain bike, but it was good enough for 90% of urban cycling situations. After all, I was neither racing the Tour de France nor was I conquering rugged jungle trails.

Indeed, the strongest point of the Brompton is its versatility. Van’s Urban Bicycles, which is in a converted bungalow, has a large garden with a mini cycling track where users can try out the different types of Bromptons before buying one.

“For example, there are four main types of handle bars to suit different riders’ preferences,” explains Vanessa Cheah, the co-owner.

Pauline Lee, a lawyer in her 40s, says that she wheels her bike straight into a café and tucks it under the table.

“With a Brompton, you’ll never need to park your bike outside. It’s the best compact folder for city sightseeing and multi-modal commuting. But for long distance bike touring, other bikes are more suitable.”

Moslim Othman, a semi-retired civil engineer in his late 50s, has three of the bikes and even took part in the Brompton World Championship 2012 at Blenheim Palace, Britain. Ng Chor Guan shows how easy it is to wheel his bike along like a trolley, even after it’s folded.

“I love it because of the compact fold and I can easily bring it everywhere, even on flights overseas. I love cycling around Unesco World Heritage Sites and I’ve been to New Zealand, China, Indonesia, and Britain, among other countries. I next plan to ride my Brompton around Hoi An in Vietnam.”

Ten shares that her bike has become an “integral part” of her life.

“I cycle with it to the market, restaurants and banks. The bike can be folded down easily and quickly and it serves as a shopping cart for me as I roll it around.

“The guards at shopping centres always allow me to roll in my bike as the fold is even smaller than a wheelchair or pram. Brommies do get away with these things more easily than other bikes!”

She adds that the functionality of the Brompton is more noticeable on overseas trips as she can pack her bike into a 56x56x30cm bag – and still have space to put clothes in! When she went to Japan, the Ezy Wheels allowed her to move her folded bike about on long subway platforms there.

“I have never viewed it as a status bike. To me, it fits my needs,” says Ten.

“The bike isn’t for everyone. If you’re a speed demon, don’t get it. But if you want to see places at a leisurely pace using a mix of public transport, then the Brompton is for you.”

THEY say that the best form of flattery is imitation. For several years, at least, there has been a Taiwanese version (or copy, if you will) of the British Brompton.

This has been sold under the brand name Flamengo, then Providence, and now, the MIT V8 and, for the casual observer, it’s hard to tell them apart. 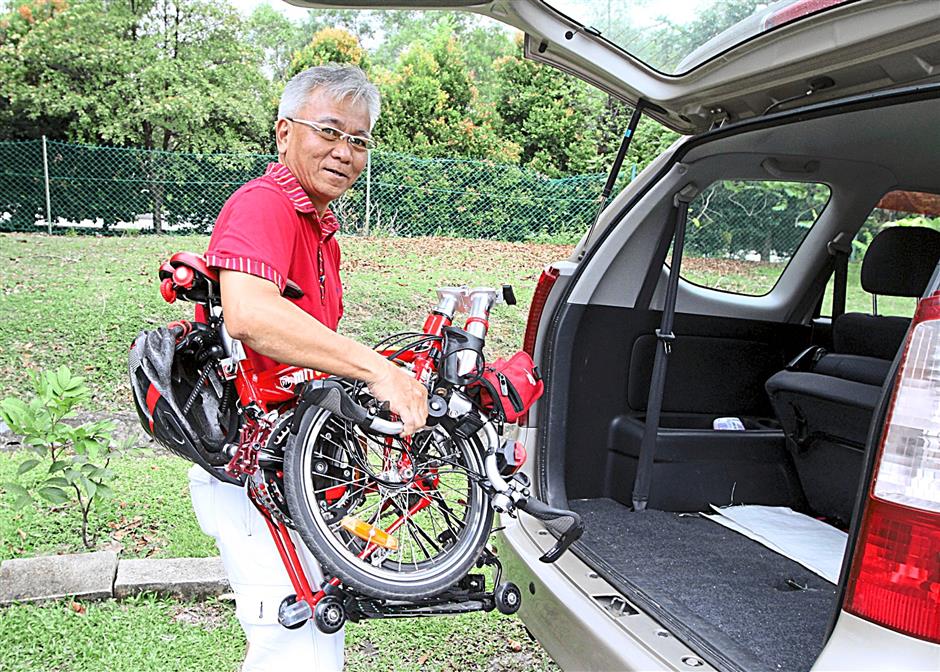 “It folds the same way as a Brompton but it’s only half the price. It’s also slightly lighter,” he explains. “Plus, I have upgraded the gear system cheaply from eight speeds to 18 speeds. If I did that on a Brompton, it would have cost a bomb.”

However, two owners of the Flamengo who complained of niggling problems with their bikes, eventually upgraded to the “real thing”.

“There were small but annoying things. For instance, when going downhill fast on winding roads, it (the Flamengo) doesn’t feel so steady,” says one of them.

Questions also persist about whether the Taiwan-made version is as “solid” and durable as the British original.

But Yong says: “I’ve already done about 2,000km on the bike and I love my MIT. So far, there have been no problems.” 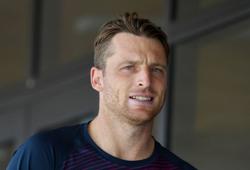