Ignorance is not bliss when it comes to sex

Sex education does not tell children to have sex. It teaches them to make smart choices.

AMANDA* didn’t even realise she had sex or was pregnant, until she had a miscarriage. She was just 15 then, and her uncle had told her “hugging and kissing” was love.

She will never have children as her miscarriage has severely damaged her reproductive organs.

But Amanda is making sure other children will not be raped just because they are ignorant. No one taught Amanda what sex was and how to protect herself. So the graduate teacher is now telling other children about the facts of life. She wants them safe and well-informed.

Amanda works with at-risk children and teens. She gives them sexuality education, telling them about the physical and emotional changes they will experience at puberty.

“I give them information on the biology of their sexual reproductive systems and about fertilisation. I tell them how important it is to be safe. I teach them to differentiate between ‘good and bad touch’. I tell them they have the right to say ‘no’ when someone, be it an adult or their peers, does anything which they are not comfortable with,” says Amanda. These were things she didn’t know as a child.

“I didn’t think I could say ‘no’. When my uncle fondled me, I felt uncomfortable, but I didn’t know if it was wrong or not. He was my uncle. By the time I realised something was not right, it was too late. I don’t want this to happen to any other girl or boy. We must empower children with the knowledge and skills to protect and stand up for themselves,” she says.

She now realises that even sexually active teens know little beyond the physical act.

“They don’t know the link between having unprotected sex and getting pregnant. They don’t know what it means when they missed their periods. They have never heard about sexually transmitted diseases. All they know is what their friends or boyfriends tell them ... like how you can never get pregnant the first time you have sex, or that you have to have sex many times before a baby can be conceived. And, most of them don’t feel that can say no when their boyfriends pressure them to have sex,” says Amanda. 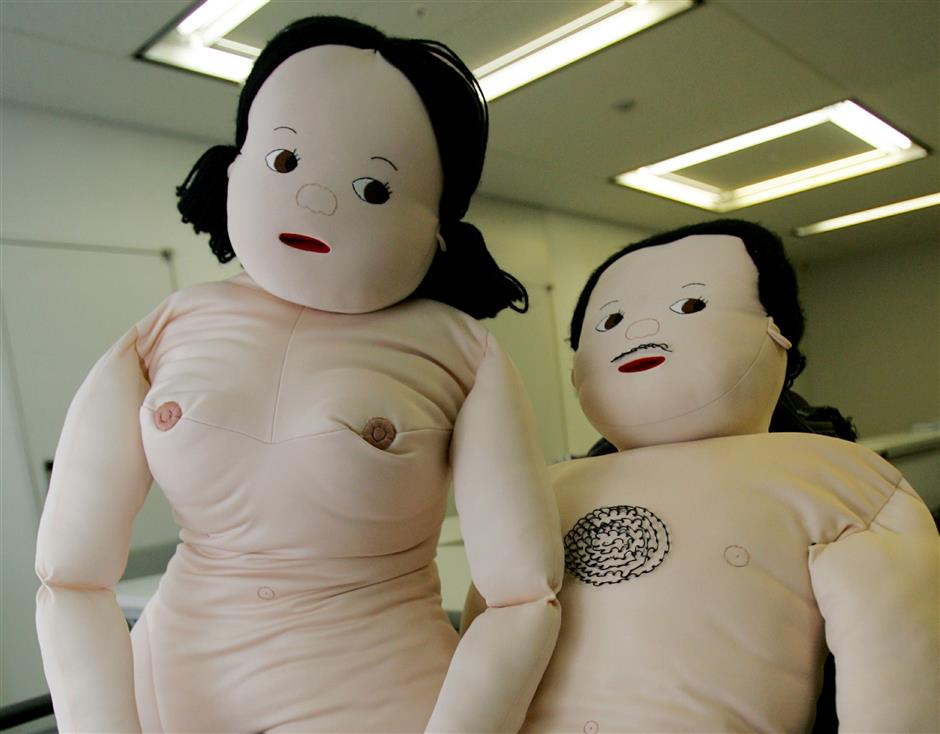 Male and female dolls are used in the classrooms to teach students about their body.

Ignorance is not bliss

Comprehensive sexuality education, or reproductive and social health education as it is termed in Malaysia, is important as it empowers children and youth with information that can keep them safe and healthy.

Contrary to what many believe, sexuality education does not teach children and youth to have sex, stresses United Nations Population Fund (UNFPA) programme advisor Saira Shameem. Rather, she says, it empowers the young with medically accurate knowledge about their bodies so that they can make informed decisions.

“No boy or girl wants to become a parent at 14. We work with high-risk youth in juvenile homes and when we ask them if they planned on becoming parents, they all said no. The problem is, they didn’t know the consequences of what they were doing.

“Comprehensive sexuality education isn’t about encouraging children to have sex. It’s actually about discouraging them and telling them there is a time and place for it. Sexuality education is preventive,” says Saira. She adds that in many countries, evaluation of comprehensive sexuality programmes shows a delay in the initiation of sexual activity among young people.

“We can’t dumb them down when it comes to their own bodies. If we don’t give them answers, they will go to other unreliable sources. We have to trust our children enough to believe that if we teach them about sex, their bodies and their rights, they will be empowered to say no at the right moment.

“If you don’t know how you get pregnant, for example, how are you going to prevent it?” she says. 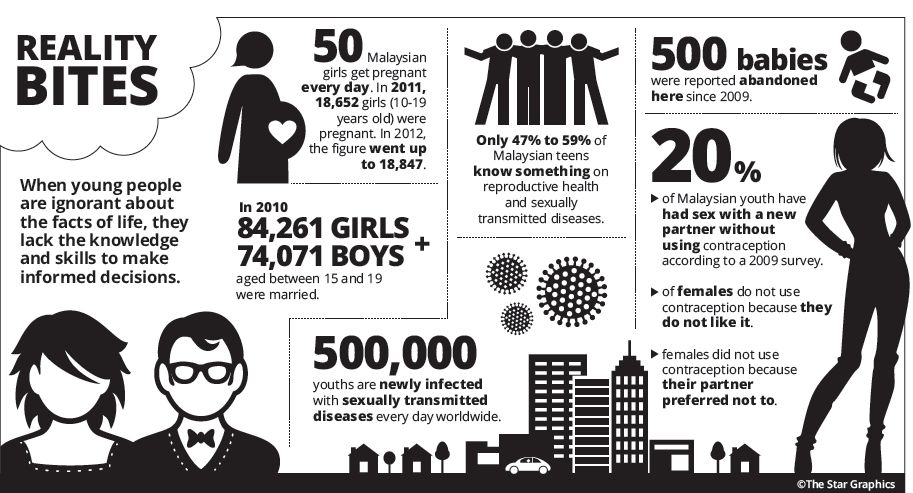 In Malaysia, elements of reproductive and sexual health education have been incorporated in primary and secondary schools since 1989. The syllabus, however, isn’t comprehensive, says Saira, and leaves out vital information about contraception and sexual orientation, for example.

“There is a gap between what is taught in school as a biology subject and what is experienced in real life. If all you’ve seen are diagrams, you will not be prepared for what you experience in real life,” she says.

Since 2000, UNFPA has been working with the Federation of Reproductive Health Associations Malaysia (FRHAM) and the National Population and Family Development Board (LPPKN) in developing a reproductive and sexual health modules suitable for Malaysia.

Both organisations produced substantive training modules on the subject – LPPKN’s module is for secondary schools while FRHAM came up with one for primary schools – which have been approved by the Education Malaysia and the Malaysia Islamic Development Department (Jakim).

“The idea was to get the Education Ministry to use the modules to train their teachers and to subsequently roll it out in schools.

“However, though the ministry was receptive to the content of the modules, they only took components from the modules and incorporated them in different subjects across the curriculum.

“The problem was with public perception. The ministry seems to want to inject a greater understanding of sexual education through its curriculum, but is held back because the public is resistant to the idea of teaching it in schools. Parents fear that talking to children about sex will make them go out and have sex,” shares Saira.

Presently the modules are being implemented in 40 pilot schools around the country and is taught to teens who go for National Service. 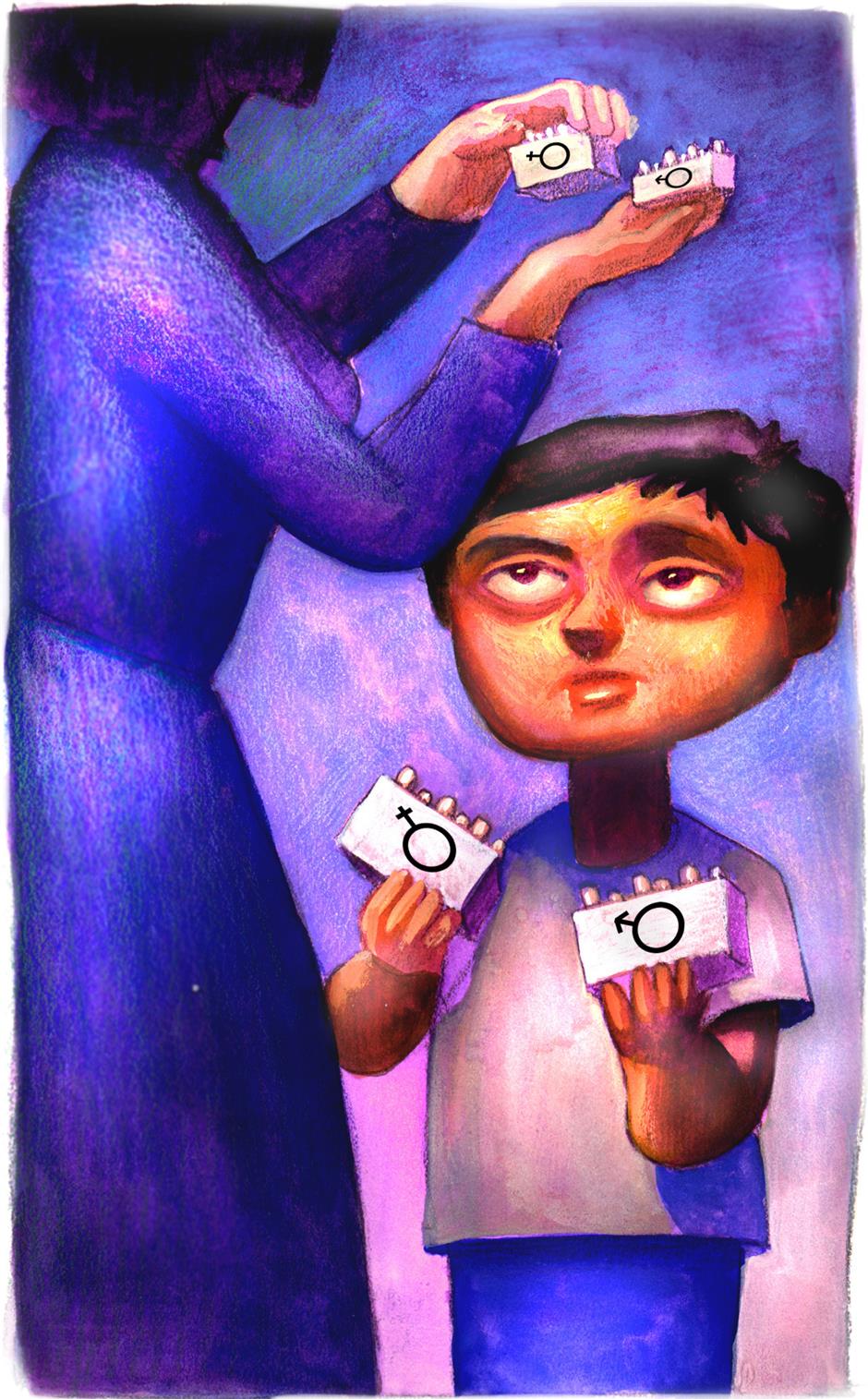 Teach your children about sexuality and sex from an early age.

S.S. Dass is all for introducing sexuality education in schools as long as there are qualified teachers to teach the subject.

“As a mother of an eight-year-old girl, I would want her to be well-informed on this topic when she is older. But I fear that if teachers are not qualified or able to carry out this lesson professionally, students may end up even more confused,” she says.

Dass feels strongly that parents should first talk about sexuality with their children at home.

“I think sex education should commence at secondary school. However, the topic can be introduced at home when children are younger. My daughter and I have spoken about what is appropriate and inappropriate behaviour and what she should do if someone touches her inappropriately. We’ve also talked about puberty and the changes to her body,” she says.

Another parent, Alina Ali, said she was unsure if schools would consider cultural and religious sensitivities.

“I don’t want my son to come home with ideas that contradict our beliefs,” she says. Alina and her husband have not talked to their 10-year-old son about sexuality or reproductive health.

“When we give talks at private colleges, we are often told not to talk about contraception. Colleges don’t want to be perceived as encouraging their students to be sexually active.

“But whether they admit it or not, it is happening. We get calls from pregnant college girls who have no idea what they should do. If we don’t teach them about contraception and safe sex, we will keep having problems of unplanned pregnancies and unsafe abortions,” says Lim.

The fear and resistance, she says, stem from a lack of public understanding on what sexuality education is about. 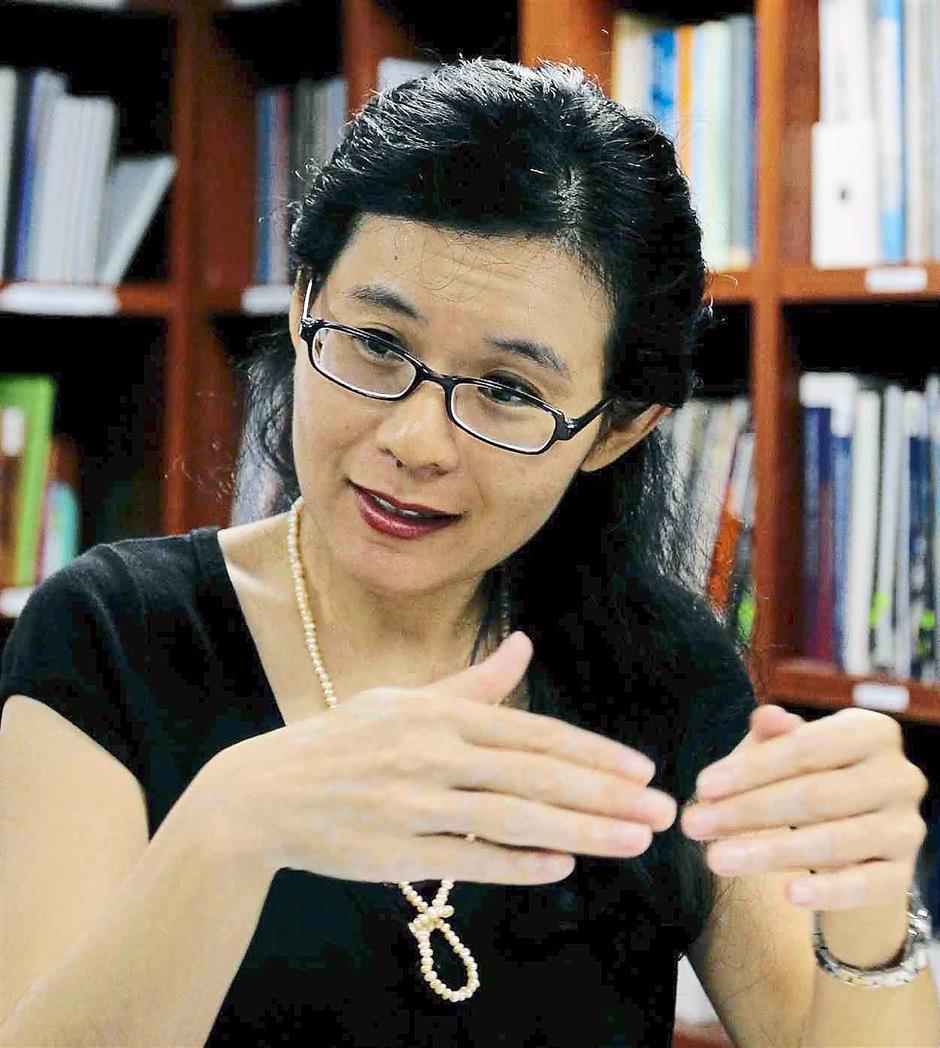 FHRAM's Lim says her organisation teaches boys and girls to look at their lives in the long term.

“We teach them about sexual and reproductive health. We tell them about HIV and healthy living. We tell them to look at their lives in the long-term. Young people are often shortsighted. They are only concerned about the present. We make them think about what they want in 10 years and how the choices they make now will affect their future,” says Lim.

Contrary to popular belief, the biology of reproduction and sex is just a small component of the syllabus, says Saira.

“It is really about dealing with social and gender relations. Relating to the people around you and the empowerment to be able to make decisions that are the best for you,” says Saira.

The Women’s Centre for Change (WCC) in Penang feels students need a safe space where they can speak freely and ask questions about sex and how their bodies are changing as they mature. 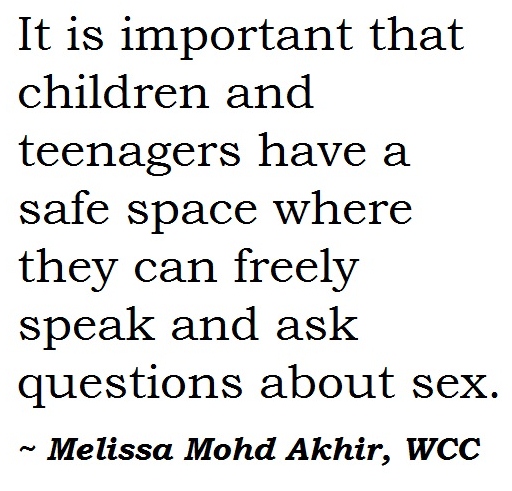 “Our experience in supporting sexual assault survivors has shown us that teachers have frequently been ‘saviours’ to children who did not have anyone else to speak to. These teachers play a big part in stopping the abuse and rescuing the child, especially when their family members are unable to help them. We conduct outreach talks in schools.

“Young people need someone whom they can talk to and who they can trust to listen to them without passing judgment,” says WCC advocacy officer Melissa Mohd Akhir.

Many youths, she says, have a misguided understanding of sex and are unprepared for the repercussions of having sex.

“The proper implementation of sex education is crucial. This is evidenced by the numerous cases of sexual assault among children and teenagers we have seen.

“In our experience, most children are in the dark about their right to dignity and privacy. Sex is taboo and seen as a highly embarrassing subject in Malaysian families. It is important that children and teenagers have a safe space where they can freely speak and ask questions about sex,” says Melissa.

¦ For more information on Reproductive and Sexual Health education, go to www.frham.org.my

NEXT PAGE: The facts of life

Comprehensive sexuality education education is about much more than sex