Online services make things easy ... unless you don't own a smartphone 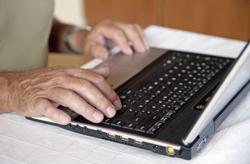 Norbert Weimar and Dietmar Enders are helping the elderly, who, without a smartphone or computer, may struggle to access some services. Photo: Frank Rumpenhorst/dpa

Seniors in the German town of Taunusstein were initially hesitant when the council presented them with a new bus service that users book online.

On the surface, everything about the service, named Emil, seemed promising: A bus with flexible travel times that users could book by app or online.

That was partly the problem, though. Anyone without a smartphone or computer might be left behind, meaning many older people in particular, says Dietmar Enders, who chairs an area council for senior citizens.

Thanks to the group’s lobbying, users can now also book the bus by telephone.

Seniors had issues accessing digital services even before the pandemic, but the coming of Covid-19 greatly accelerated the problem – and made it more visible, says Enders, 78.

He and Norbert Weimar, 70, chair a group called Accessibility and they describe how isolating it was for some who couldn’t attend a local senior citizens’ club during lockdown, or go to choir practice online, because they didn’t have access to video conferencing tools.

In 2020, some 88% of the German population were online, says the Digital Index study, and 80% had mobile Internet access.

However, a closer look at the numbers shows only half of people over 70 were using the Internet and only a third went online using a smartphone.

While Enders and Weimar are happy that many administrative services can be completed online, they asked the council to bear the needs of seniors in mind and ensure people without Internet access can also use the services.

The senior citizens’ advisory council is also busy helping users into the digital world, offering a service where older people coach their peers and help them use the web.

Six months in, the service has been very successful, state digital minister Kristina Sinemus told dpa, adding that the network is to be expanded throughout the state this year and next.

Alongside the volunteering system, there are also computer courses and “mobile phone consultation hours” where people can come with problems.

Relying on family members to help is often not enough, say Enders and Weimar. Furthermore, sometimes people need emotional or psychological support in dealing with the digital world.

Some lack motivation but as Enders notes, the pandemic forced many to try using tablets and smartphones, ready or not.

Stephanie Emde from the volunteer centre in Kassel also reports “a lot of insecurity and fear” among older people who are reluctant to embarrass themselves in front of their children and grandchildren with what they fear are foolish questions. Often, a computer course is better, she says.

The pandemic has increased discrimination in everyday life against people who are not online, she says.

According to Emde, one person seeking help was close to tears, unable to go swimming as usual as the ticket system had gone online but she didn’t have a smartphone or a computer.

Even at the doctor’s, many people now feel marginalised when appointments and prescriptions are mainly available online, says Emde.

Meanwhile in many places worldwide, Covid-19 vaccination appointments must be booked online, particularly demanding for pensioners who also were among those at greatest risk of infection.

Often, even when telephone services are available, these are insufficient, leaving users waiting for hours for answers, or forced to dial late into the night to reach a person for help.

Banks too are shuttering branches and scaling back the times when face-to-face services are available, with many encouraging customers to use digital services instead, a switch that is often highly frustrating for older people in particular.

Some seniors are drawing the line. Earlier this year, a Spanish pensioner set up an anti-online banking crusade, persuading the government to sit up and take note.

Carlos San Juan, a retired doctor, called on all Spanish banks to provide staffed services for older people in particular, rather than referring them to digital services.

Some 600,000 people signed the petition, called “I’m old, but I’m not an idiot”, within a day. San Juan, 78, then presented it to the Economy Ministry and the Central Bank in Madrid.

In response, Spain’s government promised to lobby banks to make staff available for older people, saying the industry recognised the problem and had vowed to remedy it.

And Banco Santander, Spain’s largest lender in terms of global total assets, said it would extend its teller opening hours for all customers by three hours.

Meanwhile the problem is not confined to the elderly. Surveys show around a third of Spaniards feel restricted in terms of their ability to access services, jobs or state aid due to the digital divide. – dpa Filming yourself giving flowers to women is the latest trendy challenge on TikTok
She was too sick to make her wedding, so hospital staff brought it to her
In Brazil, child rape victim allowed abortion after judge's initial refusal
Starchild: Malaysian children love playing musical instruments
Meet 7YO 'Mariachi Mateo', the world’s youngest mariachi musician
Pandemic surge in gender violence met with 'vanishingly small' funds, says U.N.
Once told she 'can’t do art', Malaysian artist now set for first solo exhibition
Battered by economic crisis, Sri Lankans seek passport to a better life
She died at 100, but her legacy of saving Jewish children from Nazis lives on
Sports camp in the US provides opportunities for physically disabled