Doyne (centre) poses for pictures along with children from the Kopila Valley Children's Home, at Surkhet District, some 600 km west of Kathmandu. Photos: AFP

A chance encounter with six-year-old Hima, a little girl forced into manual labour to help her impoverished family, helped transform Doyne from gap-year teenager into a philanthropist on a mission.

Seeing the child - one of around a dozen - working on a dry river bed breaking rocks, she felt compelled to act.

Doyne used her savings to pay for Hima's schooling. The child was the first of hundreds of Nepali youngsters she and her team have since helped raise and teach.

Kopila Valley Children's Home in west Nepal's Surkhet, founded by Doyne in 2008, now shelters 54 children. Her school is attended by 450 students who would otherwise have little chance at getting an education.

"Empowering children and educating children is the only way to truly end cycles of poverty and violence which we are seeing," US-born Doyne, who decided to stay in Nepal after visiting as a high school graduate, said.

In a country where only two-thirds are literate, according to the most recent census, and where the female literacy rate is 57.4% - this is already a challenging task.

But the spread of the novel coronavirus and the resulting lockdown made it a Herculean one. Founded by Doyne in 2008, the home now shelters 54 children.

Doyne and her team coordinated the relief effort for thousands of Nepali migrant workers stranded without food or shelter as they returned home from India.

"Overnight we found that there were thousands of people crossing over. There was no transportation, no food no water and no one had the ability to buy anything because of covid," she explained.

"It became an emergency life-threatening situation very, very quickly," she said, adding that there was not enough preparation for their arrival.

Doyne stayed in Nepal while her husband and two-year-old daughter were evacuated to Canada.

"Initially I just wanted to make sure that in this new reality that we were set up to keep the kids safe and protected and keep their education going and make sure the families have food security," she said.

But, realising the gravity of the situation for stranded families she turned to social media for help.

Within a month, she had provided 35,000 returnees with water, hot meals and emergency kits.

Doyne's challenge now is re-double her push for education in Nepal at a time when the pandemic has led to school closures and pushed more families into poverty. The students, selected from vulnerable, impoverished backgrounds, get free education and are also served warm meals every day.

Earlier this year, 275 former global leaders, education experts, and economists urged governments and organisations such as the World Bank to ensure the fallout from the coronavirus does not create a "Covid generation... robbed of their education and a fair chance in life."

Her school began as a small bamboo shack, and is now a large complex spanning nearly three acres, complete with a sports space and even a farm.

The students, selected from vulnerable, impoverished backgrounds, get free education and are also served warm meals every day.

"You would do anything to give your child the best education and so just because these kids don't have an advocate and they are victims of poverty doesn't mean that they deserve anything less," Doyne said.

"That's what you see here, a place that you'd want your child to go."

In 2014 Doyne was awarded the Unsung Hero of Compassion by the Dalai Lama. The next year, she hit headlines after winning the 2015 CNN Hero of the Year Award.

Originally from New Jersey, she volunteered at an orphanage in India before arriving in Nepal in 2007.

Hiking through the country's rugged terrain as Nepal's civil war came to a close, Doyne met Hima and other children doing manual labour -- and knew in that moment she wanted to stay in Nepal to try to help.

"I felt like doing something and trying to make it better would be easier than going back," she said.

Instead of applying to colleges, Doyne began to fund more children to go to school. 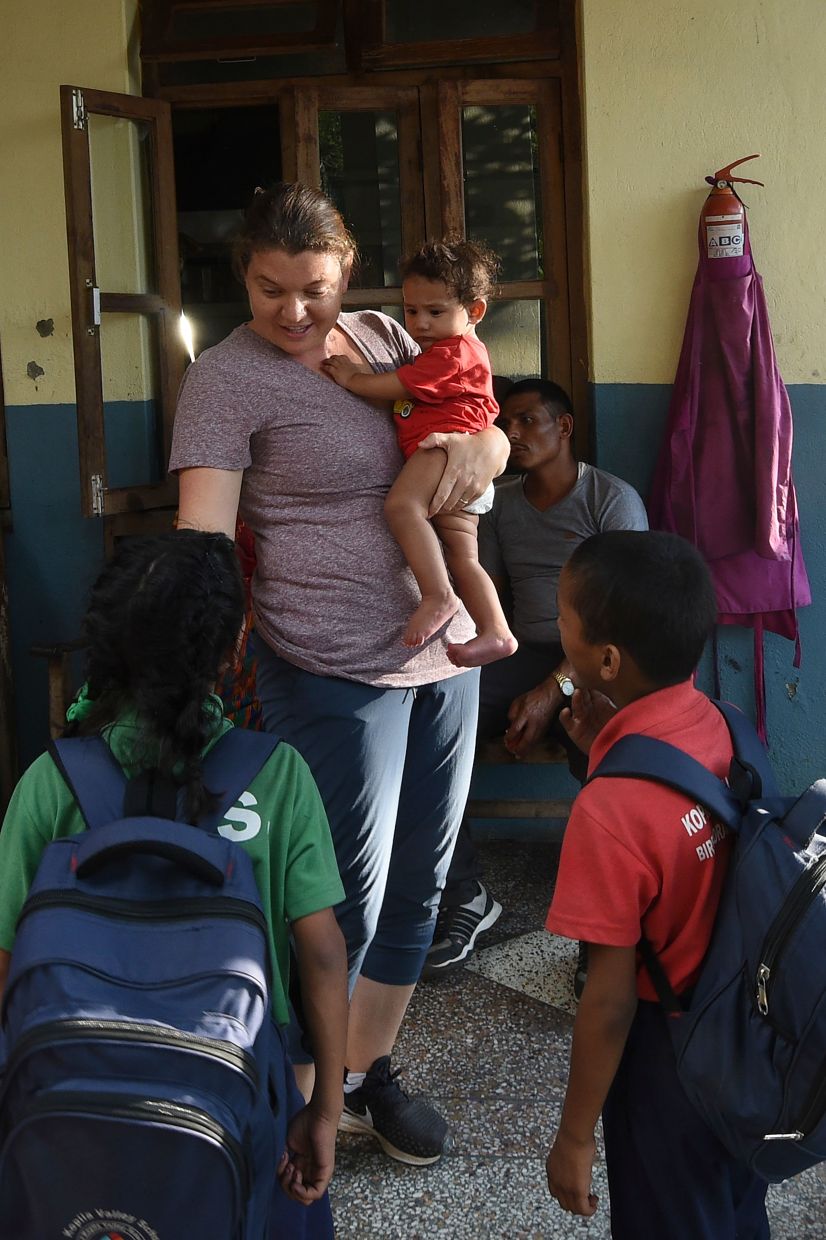 Doyne put her life-savings of US$5,000 (RM20,836) and, along with her Nepali co-founder Top Bahadur Malla, opened the doors of Kopila Valley Children's Home, and then the school.

"But for some kids who aren't fed and don't have the basic safety and family, going to school is just a distant wish," she said.

Doyne put her life-savings of US$5,000 (RM20,836) and, along with her Nepali co-founder Top Bahadur Malla, opened the doors of Kopila Valley Children's Home, and then the school.

Her non-profit BlinkNow Foundation helps fund social initiatives including a health clinic and a women's centre.

Doyne has faced some criticism - advocacy group No White Saviors has questioned whether a teenager from another culture with no higher education was best placed to serve the interest of Nepali children.

But she is now seeing the first generation of students carve new lives and some are even returning to help her mission: the school's office manager, teaching assistant and accountant were all once its pupils.

"To see a future where this place is run by the kids themselves... I think that's the full circle moment. Seeing them all go out into the world and become change makers and leaders," Doyne said.- AFP