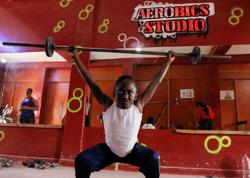 Kenyan scientists in "race against time" to develop climate-smart seeds

Keysha Atiki is only 10 but she can already lift her own weight as she trains with a weightlifting coach who once competed in the Olympics – her grandmother.

Mercy Obiero was only the second African woman to compete in weightlifting at the Olympics, representing her native Kenya in 2012.

Now retired from professional competition, the 42-year-old works as a coach, and both her daughter and granddaughter are hoping to follow in her footsteps.

"I feel very happy and proud to be training my daughter and granddaughter at the same time," Obiero said at her house in eastern Nairobi after a training session at a nearby gym that started with star jumps in front of a mirror. Obiero teaches her daughter Chanel how to lift weights during a training session. Photo: Reuters

Her 12-year-old daughter Chanel, a slight 29 kg, can already lift up to 60 kg. She squats and lifts as Obiero encourages her.

Obiero has been weightlifting for 20 years, and says she's overcome plenty of skepticism about women in the sport. She was a hockey player and athlete before her brother introduced her to weightlifting in 1999.

"I got a lot of discrimination especially in the gym – the men feel like you should not be doing this. But with time, you get over it," she said, her medals glinting in the light.

Obiero said Covid-19, which forced Kenya to shut its schools in March, had brought the family closer and given the children more time to train. She watches proudly as her granddaughter Keysha – a slight 32 kg - prepares to lift 30 kg. Obiero steps forward to support her, watching her in the mirrored walls of the gym.

After the workout, she's glowing.

"My grandmother is my role model," said Keysha, Obiero's eldest daughter's child. "I am very proud to have her." – Reuters

Female triathlete does Everesting on her bicycle in Malaysia

Kenyan scientists in "race against time" to develop climate-smart seeds Everybody loves 'The Crown' - except the royal family
Does your child have a speech delay? Here's how to get them talking
Five steps to make Budget 2021 allocation for victims of violence effective
Believe victims, don't blame them
Pandemic inflames violence against women
Merkel urges German citizens to intervene on behalf of women facing violence
Parties only among family members, except for the Trumps
Sole female candidate for Burkina Faso presidency says education key to progress
Girls storm the boxing ring in Gaza gym
The birthday conundrum: should siblings get consolation presents?