In the presence of greatness: An afternoon with Ruth Bader Ginsburg

Ruth Bader Ginsburg had an intense gaze behind her boxy lenses. Photos: AFP

Ruth Bader Ginsburg was a petite woman from Brooklyn who grew up to be a towering figure in American legal history and cultural trailblazer in American life. She was the most intimidating interview I have ever done.

Ruth Bader Ginsburg had an intense gaze behind her boxy lenses. She had angular features that made her face stand out even as her body seemed to disappear in a giant cream-colored sofa. She snuggled into a beige wrap and considered each question for more than a few moments before she answered. I remember thinking how intimidating her 1,000-yard stare must have been to the generation of lawyers who have delivered arguments before the nation's high court since Ginsburg arrived in 1993.

Jane is a noted international expert on intellectual property rights. The force of the combined intellect staring back at me as I tried to ask coherent questions was palpable.

At the same time, Ruth Bader Ginsburg was quick to smile and laugh as we talked about her early years as a mother of two (Jane has a younger brother, James) juggling law school at Harvard followed by a busy career as a law professor at Rutgers and Columbia University.

She flatly told me that she never "thought of myself as a trailblazer," but what was clear from our conversation was that RBG was a forerunner for legions of working mothers forced to figure out how to balance motherhood with the drive to build a career of her own. As she often did, RBG missed no opportunity during our hour-long conversation to praise the memory of her beloved late husband, Martin Ginsburg, for supporting her at every highly unconventional turn of their lives.

One story that Ruth Bader Ginsburg shared freely with me that day struck me for its candor and for its eternal truth. Mourners gather at a makeshift memorial during a vigil for Ginsburg outside of the Supreme Court in Washington, DC. Photo: Bloomberg

"Jane was 14 months old when I started law school. There was a break in my day so I worked very hard until four in the afternoon, then I came home and it was Jane's time. So I would play with this little child and then by the time Jane went to bed, earlier than most children, then I was happy to go back to work. Also I realised there was something else in life beside studying hard in law school.

"I realised that in a devastating way when this little child of mine was creeping along the floor and (suddenly) she has a mouth full of mothballs. I had just put some sweaters away in the drawer. I had to take her to the Cambridge City Hospital to get her stomach pumped. I can remember hearing her screaming. That really brought home to me that there are things in life other than law school. Each part of my life was a respite from the other. Taking care of Jane was fun and reading to her was fun. Two totally different lives that I was living at the time, each one was a respite from the other."

RBG and Jane had the easy rapport in our conversation that indicates a deep bond. Jane told a story that made her mother laugh about how when she was in first grade she overheard another mother telling one of her classmates: "You have to be nice to Jane because her mommy works." A mural of RBG by artist Rose Jaffe, in Washington, DC. The progressive icon died at the age of 87 after a battle with pancreatic cancer.

Ruth Bader Ginsburg was an influential figure for decades, but it was only later in life that she became a pop culture sensation. She seemed to be enjoying the attention from documentary producers and journalists and Hollywood. She made a point of showing me a few of her recent magazine covers during our time together.

RBG and Jane both beamed with pride as they told me on that fall day six years ago how Jane's daughter, Clara Spera, had just started Harvard Law School, becoming the third generation of Ginsburg women to do so. That made it especially poignant to learn that Ruth Bader Ginsburg's last request of the country to which she gave so much - "My most fervent wish is that I will not be replaced until a new president is installed" -- was dictated to her beloved granddaughter.

When I floated out of the Watergate Complex that afternoon, I felt deep in my bones that I had been in the presence of greatness. Rest in power, RBG. - By Cynthia Littleton/Reuters 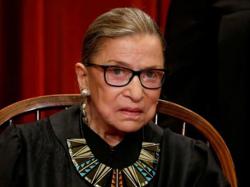