A face in the crowd: She's protesting because it could happen to her family

Bundy says most protesters are like her, peaceful people called to duty by experiences of racism and police aggression. (AP Photo/Darron Cummings)

She couldn’t eat and she couldn’t sleep, jolting awake an hour after going to bed. Kelly Bundy felt haunted by the people who died by police bullets, or had an officer’s knee on their neck.

She could hear her grandmother screaming when police gunned down their family friend, 19-year-old Michael Newby, in a 2004 killing that scarred this city. That was 16 years ago, but suddenly it felt like yesterday, and like nothing had changed since. The list has only grown, in Louisville and beyond: Trayvon Martin, Michael Brown, Eric Garner, Tamir Rice, Freddie Gray, Breonna Taylor, George Floyd.

"It’s almost if I’m being haunted by them because I’m not doing enough, ” Bundy said, so she got out of bed after two hours of sleep and headed out to the streets for her third day of protest.

The unrest has engulfed cities across America in honor of George Floyd, who died after an officer pressed his knee into in his neck while he pleaded for air in Minnesota; Breonna Taylor, a 26-year-old EMT who was shot in Louisville by detectives knocking down her door in the middle of the night; and other African Americans. Tens of thousands of people protest nightly, in dozens of cities and towns, touching every state. They raise signs, chant for justice, and repeat the names of those lost. 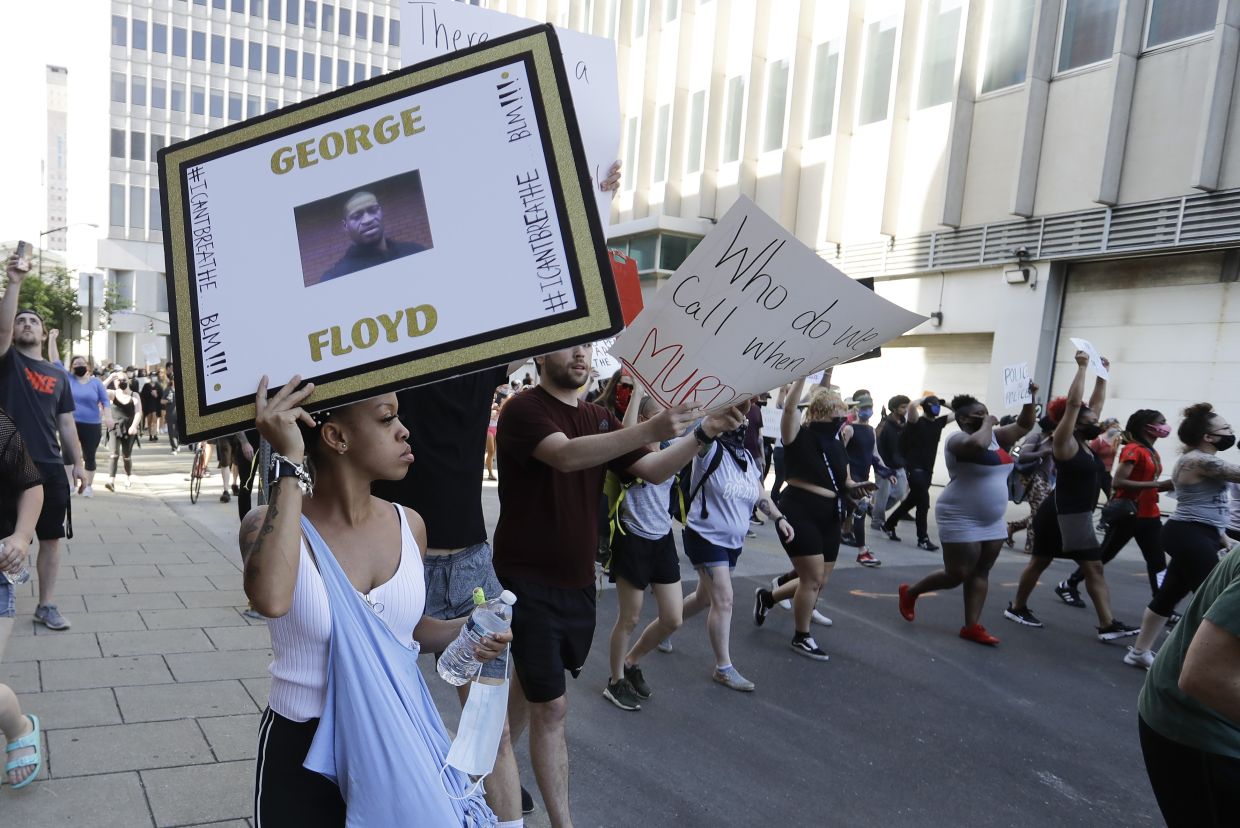 Bundy was 13, and she recalls her grandmother flipping on the news, hearing the name of the dead young man and wailing.

Much of the focus has been on burning buildings and police cruisers, smashed windows, fireworks tossed at officers. Bundy and her friends say they know the truth: Most protesters are peaceful people like them, who feel called to duty after a lifetime of inequality, the everyday indignities of racism, the enduring fear of police aggression.

In every crowd, like this one of thousands packed into a downtown square, there are gig workers like Bundy, who bartends, delivers groceries, and hosts a radio show; there are nurses and lawyers, pastors, a fashion designer, a model, a comedian, an employee of the mayor’s office.

Louisville police, like others, have dispersed crowds with tear gas and pelted protesters with pepper balls. Military vehicles block streets, and officers in riot gear with batons break up demonstrations at dusk. Helicopters circle overhead. Early Monday morning, a new round of fiery resistance ignited in Louisville, when David McAtee, the owner of a barbecue restaurant, was killed while police and National Guard soldiers were enforcing a curfew.

On Monday morning, Bundy, 30, and her friends packed cases of water and snacks to distribute to fellow demonstrators; they brought a first aid kit and milk to pour into the eyes of people tear gassed. Authorities keep telling everyone to go home and be safe. But Breonna Taylor was shot in her own home, Bundy said, so that doesn’t make much sense: "I could get killed at home because of the color of my skin. Where are we safe? What difference does it make, being out here or going home?”

The recent unrest is the most acrimonious confrontation between police and protesters here since the 2004 killing of Newby, who was shot in the back by Officer McKenzie Mattingly. Mattingly was fired and indicted, then acquitted by a jury. When she was 17, she said, she was leaving a nightclub with friends, and a group of white women taunted them about their clothes, how they shouldn’t be in the neighborhood.

Bundy was 13, and she recalls her grandmother flipping on the news, hearing the name of the dead young man and wailing. Bundy's grandmother’s best friend was Newby’s mother. The phone started ringing. "They killed our boy, ” the callers cried.

Today, many Louisville protesters say the Newby killing turned them into activists. It was the day Bundy saw clearly how America would work against her all her life.

There are the everyday injustices: impoverished neighborhoods, lack of health care, underperforming schools. Then there’s the overzealous policing: When she was 17, she said, she was leaving a nightclub with friends, and a group of white women taunted them about their clothes, how they shouldn’t be in the neighborhood. Officers arrived, and they assumed the young black women were the aggressors. One slammed her to the ground, Bundy said. Most black people she knows have some experience like this, and it feels to her now like that anger is irrevocably boiling over. 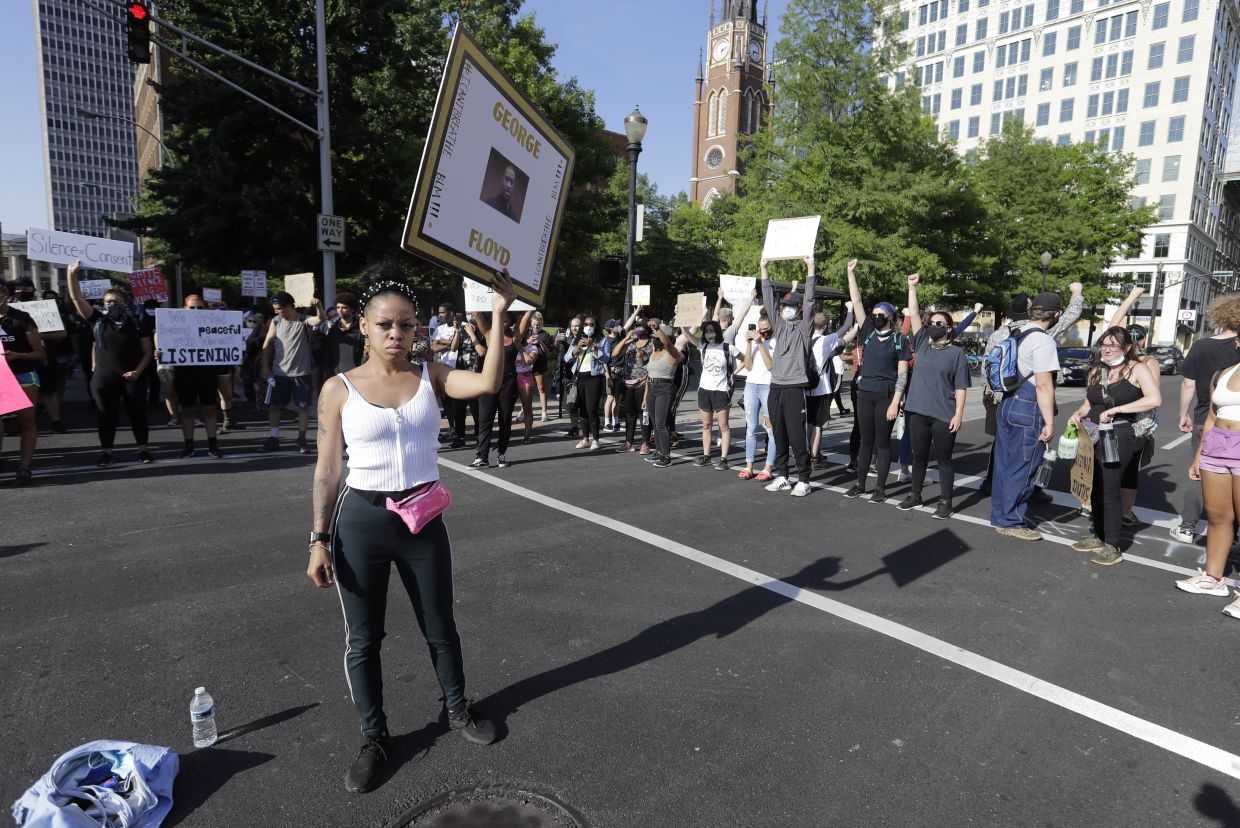 Her family begged her not to go: "You’re going to get killed, your name will be the next hashtag. But she couldn’t get the sound of her grandmother screaming out of her head.

The protests have been traumatising, and she thinks she’ll cope with that the rest of her life. The first day, she was terrified. Her family begged her not to go: "You’re going to get killed, your name will be the next hashtag.” She didn’t even get out of her car. But she couldn’t get the sound of her grandmother screaming out of her head. She couldn’t eat, or drink, or sleep.

She went back the next day. She got tear gassed just as she stepped out of her car, she said, and a friend poured milk in her eyes. She watched officers fire nonlethal projectiles at her friends. She thought of her three children, and wondered whether one day they’d have to go through this, too, like her parents and grandparents and now her.

The next day, she stood in the front of the crowd, holding a sign high: "George Floyd.” She led hundreds as they marched, stopping traffic. Most cars honked, and drivers thrust their fists in the air in solidarity. A group of officers met them in the city square, and some demonstrators hugged them. Bundy did not. She said she wasn’t ready yet.

As the sun set, the clock ticked toward curfew and police in riot gear lined up a block way, she headed home, with plans to return again in the daylight. - AP

Unmistakable aroma of Kuih Kapit a reminder that CNY is drawing near
The way children are growing up is changing because of the pandemic
Student-run store helps feed town's hungry
'Peanuts' pen-pals find comfort in correspondence
For better or for worse: A family on the edge of society
Do something good every day, says Romania activist
Symptoms aside, dealing with anxiety the hardest part of being Covid-positive
Starchild: A Malaysian girl shares her creative writing on topic, Giants
Investigating the scene of death
Starchild: Malaysian children get creative with their drawings on giants