Chicago-based Palestinian artist Shirien Damra, who uses art to fight for social justice, has drawn one of the most striking images of George Floyd on social media. 'Heartbroken, angry and disgusted. This must end. Much love and solidarity to Black communities grieving another beautiful life lost. May George Floyd Rest in Power,' writes Shirien on Instagram in a message accompanying the illustration. Photo: Shirien Damra

American citizen George Floyd, who died on May 25 after a Minneapolis police officer knelt on his neck for nearly nine minutes, has become a fresh symbol of police brutality against blacks.

In the United States, violent protests, street demonstrations and looting nationwide have continued for a sixth day over the death of Floyd, with around 4,000 people arrested in the US.

In the art world, several artists have taken to murals and paintings to pay tribute to Floyd, fight racism and make sense of this unnecessary and tragic death.

Here are some powerful and poignant works: 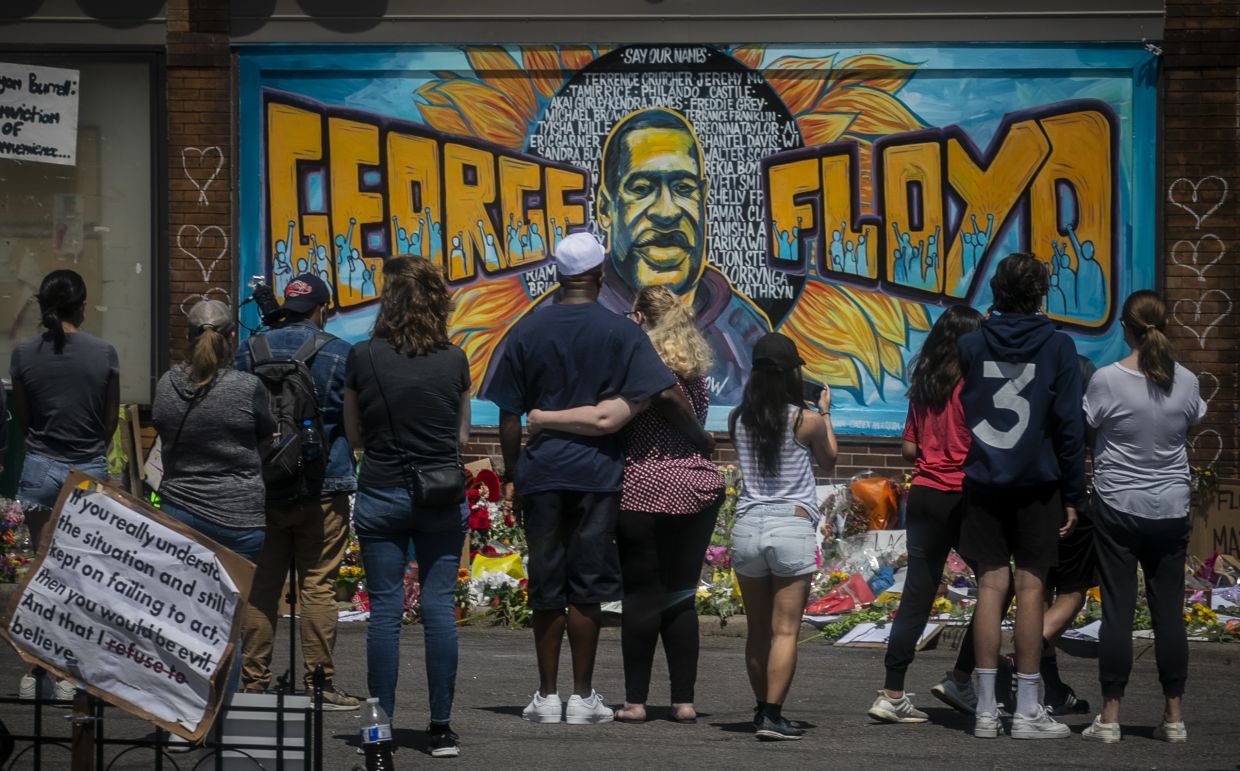 Visitors make silent visits to a memorial featuring a mural of George Floyd, near the spot where he died while in police custody near the intersection of East 38th Street and Chicago Avenue, Minneapolis. The mural was done by a group of local artists. It features Floyd's full name displayed prominently across the wall, the portrait resting in between, and in the backdrop, a sunflower with the names of other individuals who have been killed by police over the years. Photo: AP 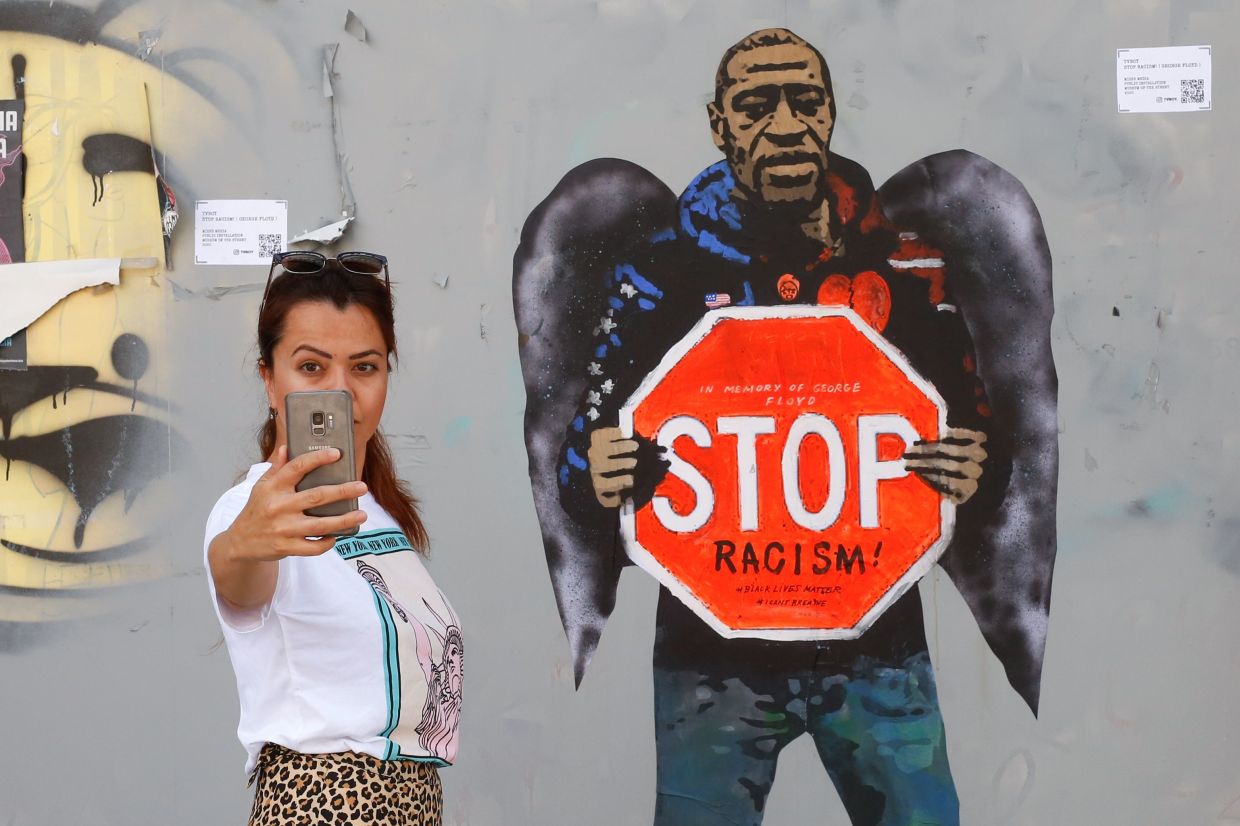 A woman takes a selfie picture posing next to a street mural work by urban artist Salvatore Benintende aka 'TVBoy' depicting George Floyd with angel wings and holding a stop traffic sign against racism, in a street of Barcelona recently. TVBoy, an Italian based in Barcelona, is known for his Urban Pop Art movement works. Photo: AFP 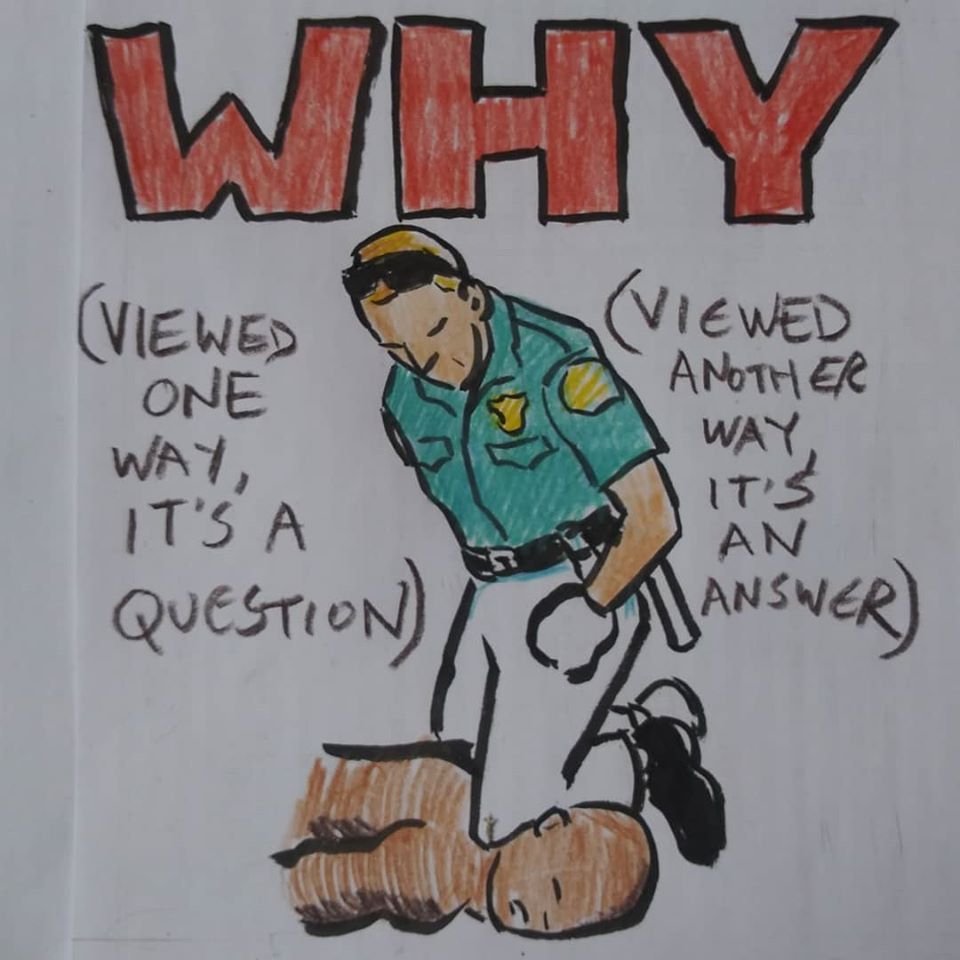 American indie folk singer-songwriter and comic book artist Jeffrey Lewis has drawn a cartoon with the word 'Why' in bold red, referencing the image of Floyd, an unarmed black man who died while while being arrested and pinned to the ground by the knee of a Minneapolis police officer. Photo: Jeffrey Lewis 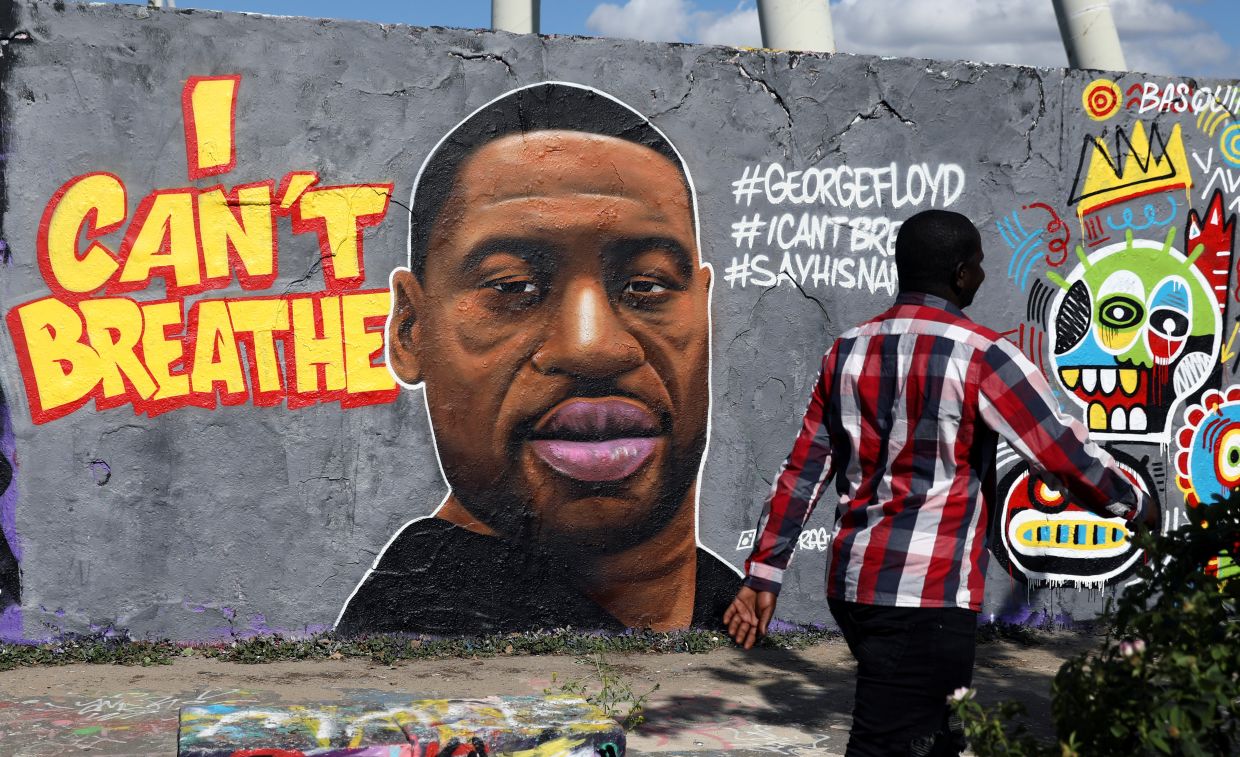 In Germany, a mural depicting Floyd has appeared on a part of the former Berlin Wall in Mauer Park. It was drawn by Berlin street artist Eme Freethinker. Outcry over the killing of Floyd has gone international, with people taking to the streets Berlin and London to show solidarity with US protesters. Photo: Reuters 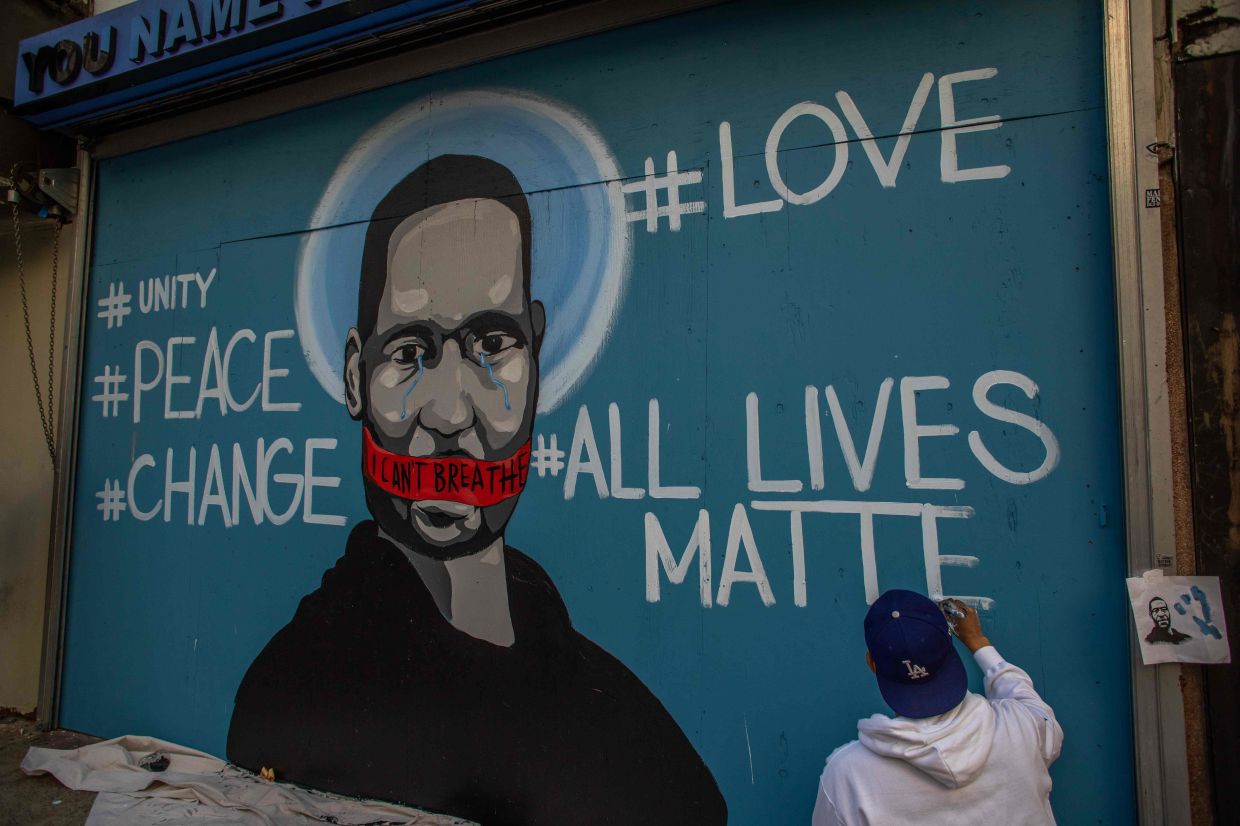 In downtown Los Angeles, street artist Celos paints a mural of Floyd. The work, featuring Floyd gagged up and in tears, calls for peace, love and change. Clashes have broke out and major cities imposed curfews as America erupts with unrest as angry demonstrators ignore warnings from President Donald Trump that his government will stop violent protests over police brutality 'cold'. Photo: AFP 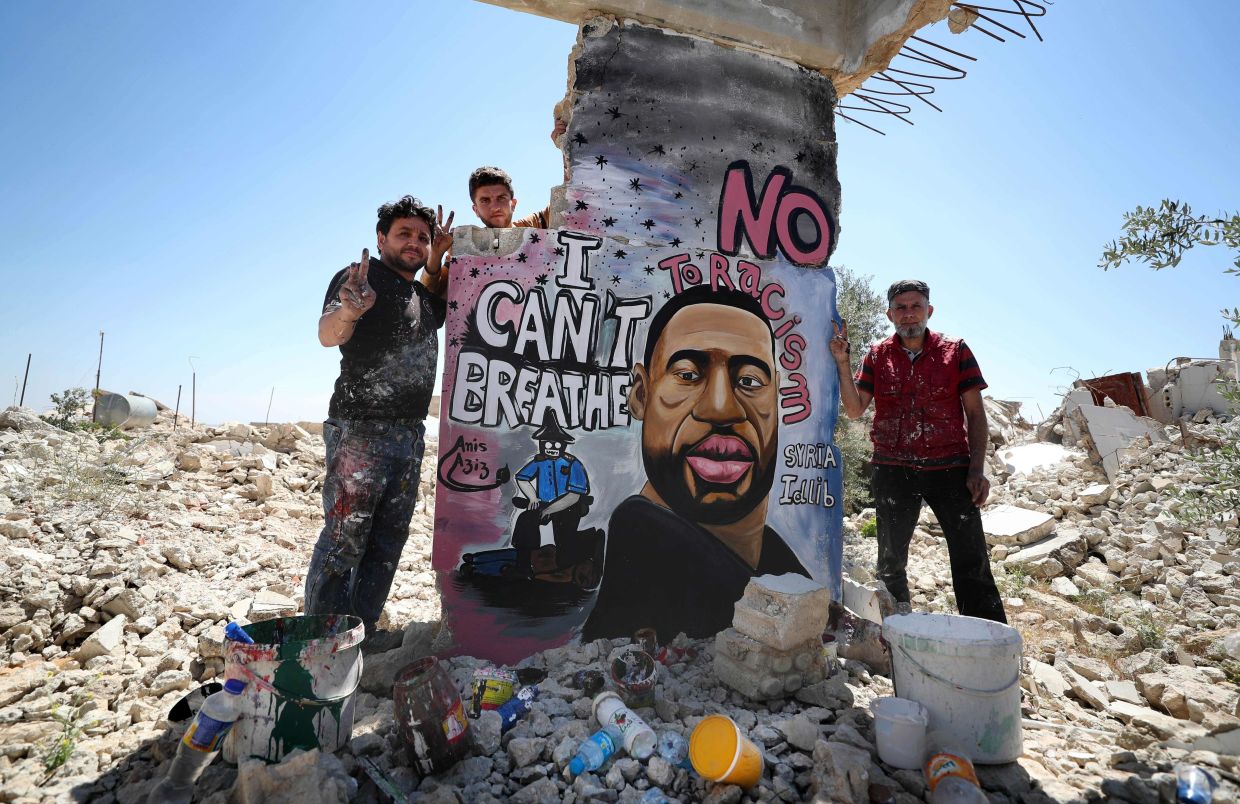 Syrian artists Aziz Asmar (left) and Anis Hamdoun finish a mural depicting Floyd in the town of Binnish in Syria's north western Idlib province on June 1. They used a bombed out house wall in their neighbourhood as their 'canvas'. Photo: AFP 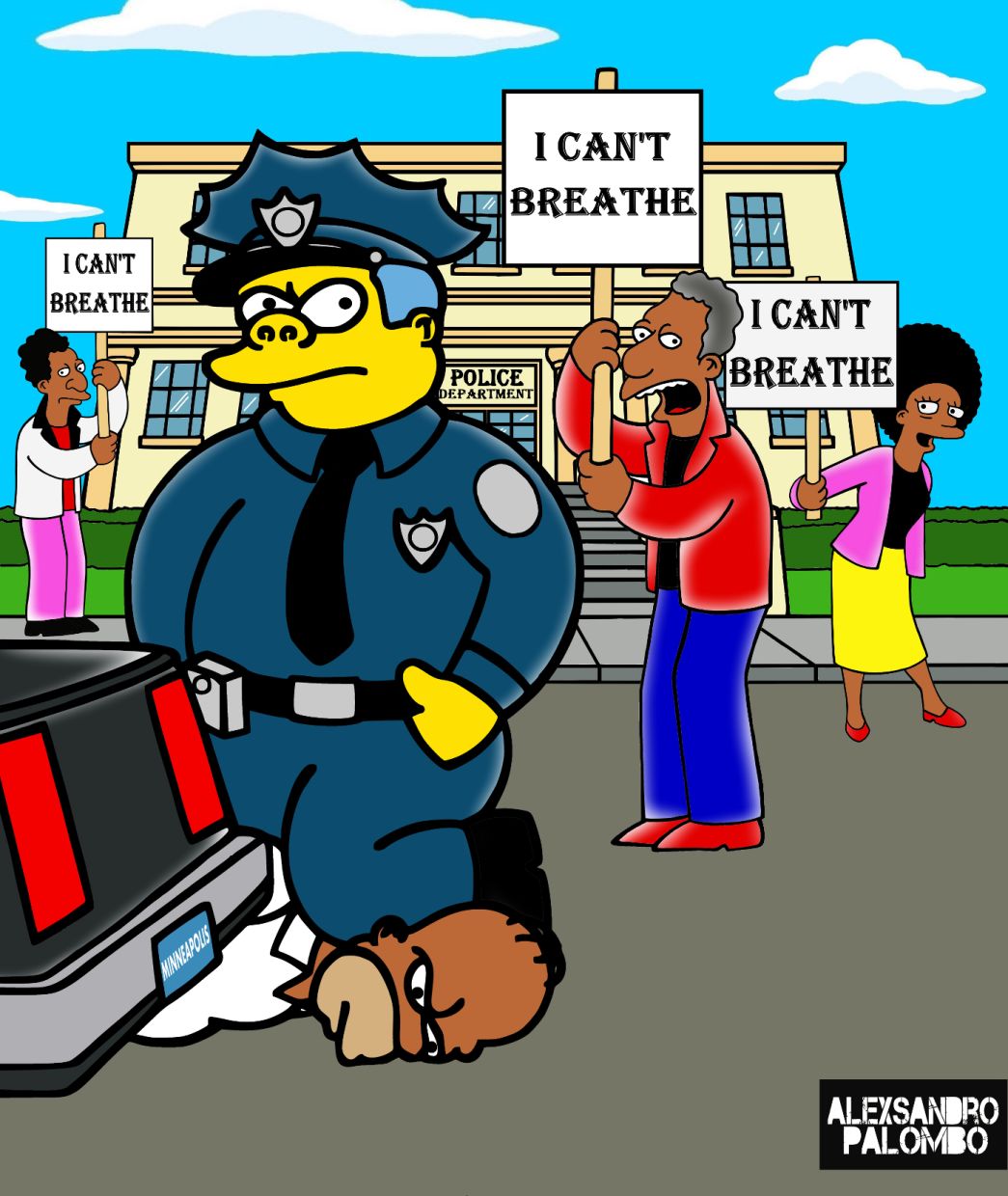 Italian artist aleXsandro Palombo pays tribute to Floyd through the famous characters from 'The Simpsons'. Palombo shared the images on his Instagram account with the title 'I Can't Breathe' Stop Racism (main motto during protests against racism and police brutality in the United States). In an image, he recreates Floyd's death, but with Homer Simpson of black complexion, with Springfield's Police Chief Clancy Wiggum's knee on his neck. Photo: aleXsandro Palombo