The couple is chosen for speaking up and wanting to change the narrative on racial justice and mental health around the world. Photo: TNS

The runaway royals will be running the New York town once again.

Prince Harry and Meghan Markle are expected to return to New York City on Tuesday (Dec 13) to receive the Ripple of Hope Award from Robert F. Kennedy Human Rights organisation.

Alfre Woodard, Natalie Morales, Don Lemon, Michael Bolton, Van Jones, Giancarlo Esposito and Richard Kind are on the guest list for the New York Hilton Midtown Manhattan Hotel event that will surely be a paparazzi magnet because of the royals.

According to the nonprofit, the Ripple of Hope Awards has “honoured exemplary leaders across government, business, advocacy and entertainment who have demonstrated an unwavering commitment to social change and worked to protect and advance equity, justice, and human rights.”

According to the organisation’s president Kerry Kennedy, the Duke and Duchess of Sussex accepted the invitation for the laureate honour back in March.

“The couple has always stood out for their willingness to speak up and change the narrative on racial justice and mental health around the world,” the former First Lady of New York state said in a statement.

“They embody the type of moral courage that my father once called the ‘one essential, vital quality for those who seek to change a world that yields most painfully to change.’”

No telling if Harry and Meghan, who are the subject of a forthcoming Netflix documentary, will reunite with Prince Williams and Kate Middleton, since seeing them at Queen Elizabeth II’s funeral in September.

The actively serving British royals popped up in Boston last week for a prickly three-day visit, which was scheduled to culminate with the Earthshot Prize awards on Friday night. – New York Daily News/Tribune News Service 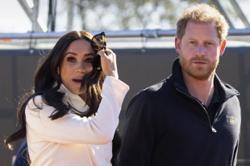