Popular British musician Ed Sheeran has tested positive for Covid-19, but will continue performing from home.

"Hey guys. Quick note to tell you that I've sadly tested positive for Covid, so I'm now self-isolating and following government guidelines," the singer-songwriter posted on Instagram on Sunday. "It means that I'm now unable to plough ahead with any in person commitments for now, so I'll be doing as many of my planned interviews/performances I can from my house. Apologies to anyone I've let down. Be safe everyone."

Sheeran was due to appear as a guest on Saturday Night Live on Nov. 6. It is not immediately clear if he will be replaced or the appearance will be changed to a virtual one.

The musician has several concert dates lined up across Britain and Europe, but they don't commence until April 2022. However, what will be affected are promotional activities around his new album from his 4th studio album =, set to be released on October 29 – his first full solo album since 2017's blockbuster Divide.

The musician will also read out a bedtime story on broadcaster BBC's CBeebies Bedtime Stories program on November 5, available on the CBeebies channel and on BBC iPlayer. Sheeran will be reading I Talk Like A River by Jordan Scott and Sydney Smith. It's the story of a boy with a stutter, whose father helps him by explaining that the flow of his words is like a river. The singer experienced a stutter himself as a young boy.

Sheeran testing positive for Covid-19 comes as Britain experiences a surge in cases. In the last seven days 328,287 people tested positive, with 949 deaths and 6,720 hospital admissions, according to official government figures. A new variant of the virus is making an impact and some scientists have called for a Plan B, which could mean the return of restrictions like wearing masks, vaccination certificates for venue entry and working from home. – Reuters 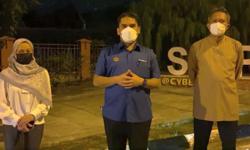