Owners are now having a headache as fans of 'Hometown Cha-Cha-Cha' are trying to barge into their houses on a daily basis. Photo: Handout

Remember the Korean woman who was inundated with phone calls after her phone number was shown on the popular series Squid Game?

Well, something similar has happened, and this time it is due to the popularity of another K-drama, Hometown Cha-Cha-Cha.

The producers of the romance drama have pleaded to fans of the show to stop visiting the houses where the series was filmed.

These houses were leased out to the studio for filming purposes but the owners are now having a headache as fans are trying to barge into their houses on a daily basis.

tvN, the broadcaster which airs Hometown Cha-Cha-Cha, starring Kim Seon-ho and Shin Min-a, have issued a statement to fans.

It reads: "We would like to thank our viewers for giving us so much love, and we would like to make one request regarding visits to our filming location.

"Hye Jin’s house, Doo Shik’s house, Gam Ri’s house, and Cho Hee’s house in the drama are spaces that we leased for filming purposes for the duration of our shoot, and at the moment, their owners are currently residing in those homes.

"They helped our drama out with good intentions, but they are currently suffering disturbances to their everyday lives because of visitors.

"For the reason described above, when you visit our filming location, we ask that you refrain from entering these houses."

The statement included an alternative for fans – why not visit Pohang city instead where the show was shot?

In the show, a dentist moved to a small town to sort out her life. There, she meets a handyman, who might just be able to fix her back. 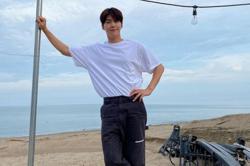