EXCLUSIVE: 'To All The Boys' Lana Condor and Noah Centineo on fame and scrutiny

In an interview with StarLifestyle, the young stars talk about stepping into adulthood with the whole world watching. Photos: Handout

Fame came fast and hard for To All The Boys stars Lana Condor and Noah Centineo.

While the success of the American teen film series has undoubtedly opened doors for Condor and Centineo professionally (the latter is slated to play the mighty He-Man on the big screen), they’ve also had to deal with their personal lives being put under the microscope.

Condor, along with real-life boyfriend Anthony De La Torre, was cyberbullied for simply not pairing up with on-screen boyfriend Centineo in real life.

Meanwhile, Centineo, just months after the release of the first To All The Boys film, had to contend with alleged nude videos of himself circulating on the Internet (the actor has chosen not to address the matter).

“It’s pretty intense. I don’t think it’s a natural thing. Like in the animal kingdom, animals don’t know other animals the way that humans know other humans, ” Centineo, 24, reflects on the concept of fame in an exclusive interview with StarLifestyle via video call.

The actor talks about the steps he has taken to keep himself sane in the craziness of fame. Condor was cyberbullied for simply not pairing up with on-screen boyfriend Centineo in real life.

“What I’ve done is I’ve tried to surround myself with a group of people that made me feel safe, protected and can call me out when I’ve done something wrong.

“I have my family with me. I try to keep myself in good physical, emotional and mental condition. I try to observe myself and analyse my thoughts, my emotions, my relationships with people.”

Condor, who had just turned 21 when the first film came out, talks about stepping into adulthood with the whole world watching.

“I’m trying to find myself under a little bit of a spotlight, which is weird and different. The journey towards finding yourself in general is weird as it is, so that has been interesting, to say the least, ” says Condor, now 23.

“I feel like when people are watching you grow up, you want to be true to yourself and you know that you will make mistakes because you’re human. But sometimes you’ll make mistakes in front of people and it’d be amplified a little.”

The actress says she turns to her character, Lara Jean, for inspiration in times like these.

“These films have definitely empowered me and helped me find my voice and take risks and speak my truths.”

The To All The Boys film series comprises three instalments, with the first one released in 2018. Each chronicles the story of a shy 16-year-old, Lara Jean, navigating through her adolescent years.

She has spent years writing love letters to her crushes only to hide them in her closet. One day, her sister chances upon them and decides to mail them out, to Lara Jean’s horror.

One of the recipients of her letters is high school jock Peter (Centineo). As the film series progresses and the two begin dating, Lara Jean and Peter’s relationship gets tested in a variety of ways. Centineo, who has been acting since he was eight, says he experienced adulthood quicker than most people.

In the third film To All The Boys: Always And Forever, which premiered on Netflix on Feb 12, the couple finds their teenage love tested once again – this time, by the realities of adulthood.

Lara Jean and Peter learn their hopes to attend Stanford University together are dashed when the former’s application gets rejected.

Condor, who is just a few years older than her character, goes on sharing about her own experience with entering adulthood.

“My boyfriend lives with me so it’s also about learning how to share your own space with someone else.

“That’s a very interesting experience as well and something that I had to adapt to and I’m loving it, ” says the Vietnamese American actress, giving an example about adjusting to life as an adult.

Meanwhile, Centineo, who began as a child actor with a small role on Disney Channel sitcom Austin & Ally, experienced adulthood a lot quicker than most people.

“I feel like I’ve had to grow up kind of fast. I’ve been working since I was eight years old. A lot of people find that as they get older, they suddenly have all these responsibilities. I’ve always kind of felt that level of responsibility.”

Nevertheless, Centineo says he still has his share of growing up to do.

“Now, it’s more the emotional aspect for me... If something’s uncomfortable, when I was younger, I would run away from it. As opposed to now, I kind of dive into it a little bit because that’s what being an adult means – to not run away from something that scares you or makes you totally uncomfortable but to face it head on.” 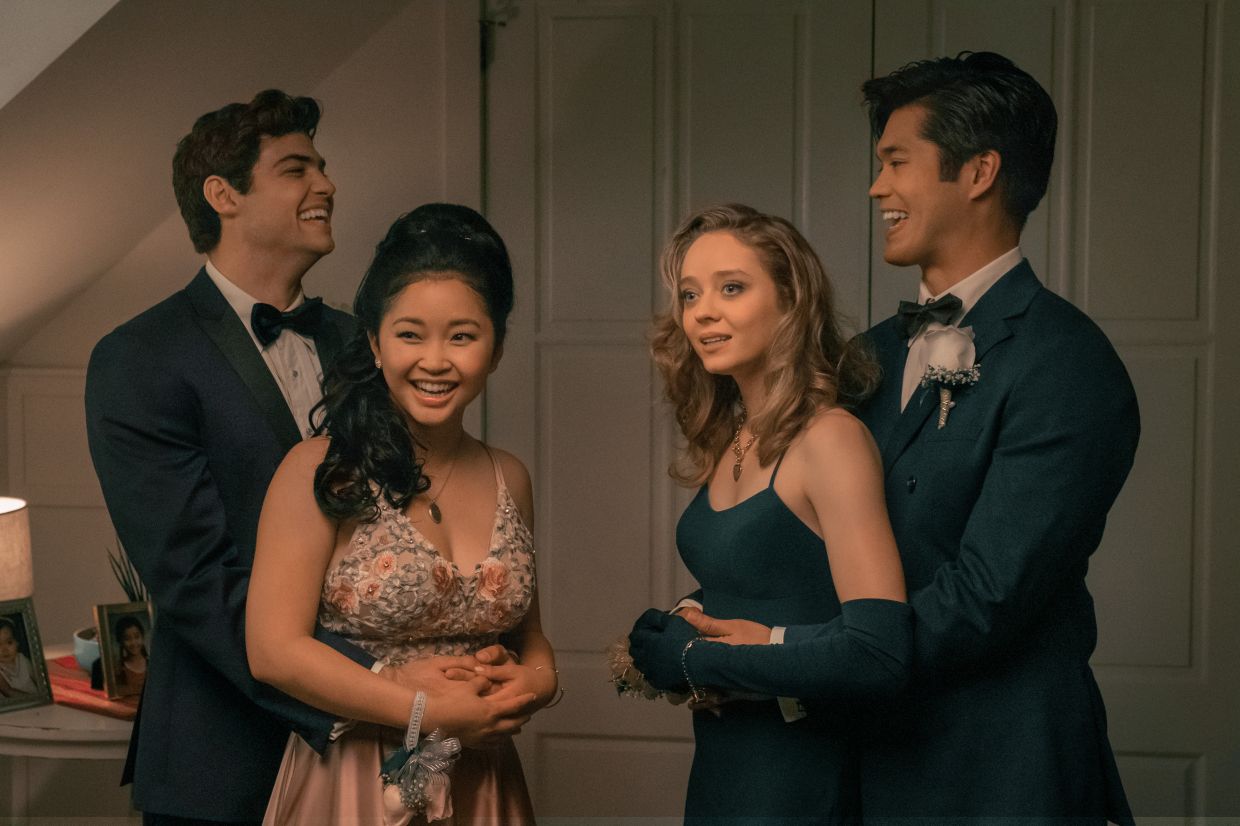 Peter, Lara Jean (left and second from left) with their friends attend prom in 'Always And Forever.'

Centineo adds he doesn’t regret choosing acting over having a conventional childhood.

“It’s something I’ve always been passionate about. I was never forced to do this. I feel fortunate enough to be able to pursue this dream. I definitely feel like even though I’ve worked hard these 16 years, I’ve also had a lot of luck.”

The actor reveals he never got to attend his own prom, adding the closest he ever came to attending one was his friend’s prom.

It’s a good thing then that Centineo got to experience one vicariously through his character, Peter.

“I would be very surprised if normal proms are as exciting as the prom from To All The Boys, ” he says.

Suited up and rocking a bow tie, Peter looked every bit the perfect gentleman when he took Lara Jean to the prom in the third movie.

Then again, being a gentleman is something the character is known for, with or without a bow tie.

So much so, Centineo’s Peter has earned the title “the Internet’s boyfriend”, with viewers falling head over heels for him.

He goes against the grain of the stereotypical depiction of high school jocks we’ve seen in the past by simply being kind, trustworthy and sensitive to the needs of Lara Jean.

“I definitely noticed how nice and kind and how much of a gentleman he was, how much respect he had for Lara Jean. It’s great to reshape the idea of what a young man should be especially when entering his first true love relationship. I think it’s healthier for girls, it’s healthier for guys.”

Centineo talks about a pivotal moment in the second film – P.S. I Still Love You (2020) – where Lara Jean tells Peter she’s not ready to give her virginity away and Peter responds with utmost respect.

“Peter’s not rushing or pressuring her. Of course he wants to but it’s not a priority in his life because he just enjoys being with Lara Jean. He’s willing to go at her pace. It’s definitely something to be noticed and celebrated.”

The significance of that moment was also not lost on Condor, especially in an age of edgy and gritty TV and films, where sexually charged content is aplenty, even among teen dramas.

“I think what’s really important for To All The Boys is to show that you don’t have to grow up so fast. Being a teenager, that’s awesome. You don’t have to rush into anything.”

'Calmtainment' is the new trend for relaxing programming

Loved 'To All The Boys'? Another Jenny Han novel to hit streaming service

Movies , To All The Boys , Lana Condor , Noah Centineo