Netflix is no longer just in the original movie business, it’s in the franchise business. Not to be outdone by the other players in the market, which often fall back on legacy titles when the going gets tough, the streamer is well on its way to creating a legacy of its own. While a sequel to To All the Boys has already been released, follow-ups to Will Smith-starrer Bright and Chris Hemsworth’s Extraction are on their way.

The Old Guard, starring Charlize Theron as Andy (or Andromache of Scythia), the leader of an immortal squad of mercenaries, comes across as a brazen attempt at starting a series and it’s tailor-made for one. Based on the comic book by Greg Rucka and Leandro Fernandez, the film is directed by Gina Prince-Bythewood, who had thus far displayed no evidence of having a knack for making action movies.

And there lies the problem. By not allowing women to make big-budget action movies, based on false assumptions and decades of prejudice, truly talented filmmakers such as Prince-Bythewood are being sidelined in favour of inexperienced white men. I can name a dozen recent action films that are infinitely inferior to The Old Guard, but were made simply because their male directors came cheap and proved themselves to be pushovers.

For instance, there is no way in hell any studio in the world would have risked the US$225mil that Universal put on first-timer Carl Rinsch to make the already forgotten Keanu Reeves-starrer 47 Ronin, on a female filmmaker. Or, for that matter, even the US$160-odd million that Fox literally begged one-film-old Josh Trank to take for Fantastic Four. Despite its various successes, The Old Guard still feels like a compromise, money-wise — the film has a made-for-TV vibe that is difficult to ignore — but it’s a start. And that’s what matters.

In addition to its refreshing handling of gender and racial stereotypes, the action in The Old Guard is especially well done — it’s a sort of mishmash of the styles Theron previously worked with on Atomic Blonde and Aeon Flux. The fights aren’t shot in long takes, but they aren’t edited to within an inch of their lives, either. Like the rest of the movie, they’re a marriage of big-budget ideas and mid-range execution.

But while Prince-Blythewood isn’t able to bring an instantly recognisable personality to the proceedings, she is smart enough to not take herself too seriously. The premise is undeniably silly, and for the film to fully embrace that silliness works in its favour. But few would demand seriousness from a scene in which Theron and her cohorts chop adversaries in half with medieval weapons.

It’s not all goofy fun, though. Between these action scenes, the film pauses to inject moments of quiet emotion, usually through flashbacks. When The Old Guard — made up of a bunch of international actors of equal beauty — finds a young woman who displays traits of being an immortal herself, they enlist her as the newest member. But she has a question: Does she have a choice in the matter? As it turns out, she doesn’t. But they let young Nile Freeman (KiKi Layne) come to terms with it in her own time.

It’s a familiar set-up, often seen in the superhero genre (‘with great power comes great responsibility’, anyone?). But The Old Guard is one of the few films that actually addresses the idea of consent – a benefit, perhaps, of having a female director at the helm.

It is also one of the rare superhero movies to wonder if saving the world, over and over again, can take a toll. Curiously, the last film to address this idea with any intelligence was another Charlize Theron movie: Hancock. In both films, the actor plays characters who’ve been cursed with immortality, sentenced to spend eternity fighting evil. There’s a reason why her characters gravitate towards others with similar ‘powers’ – everyone else that they love will die. The immortals are (mostly) immune to physical injuries, but not emotional ones. The Old Guard is about Andy trying to find a purpose.

Theron delivers a dependably strong performance, effortlessly moving from cold-hearted killer mode to motherly mentor. But in a cast made up of massively talented actors such as Matthias Schoenaerts and Chiwetel Ejiofor, the absolute standout is Harry Melling, who plays the villainous technocrat obsessed with extracting the immortals’ DNA ‘for science’. Some of you might remember Melling’s equally outstanding performance as the limbless thespian in the Coen Brothers’ The Ballad of Buster Scruggs. Most of you, however, will remember him as Dudley Dursley from the Harry Potter films. He’s one to watch out for.

Who knows, he might appear in an Old Guard sequel, somewhere down the line. The premise is ripe with potential for future instalments, which may or may not go back into the past. Either way, I’ll be there, crossbow at the ready. – Review by Rohan Naahar/The Hindustan Times (New Delhi)/Tribune News Service 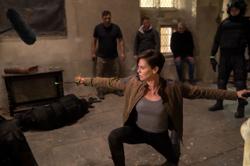 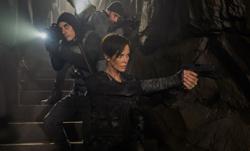 Charlize Theron on playing a 6,000-year-old immortal in 'The Old Guard'