Siti Nurhaliza has released an album every decade for 4 decades. We relive her best hits We trace how Siti’s music has evolved by looking back at each decade and the hits that came out of it.

This was the power ballad that started it all for Siti. Fresh from her Bintang HMI win in 1995, the then 17-year-old Siti went straight to work and recorded her self-titled debut album.

Lead single Jerat Percintaan quickly became one of the biggest songs of 1996, winning the coveted Best Song trophy at the Anugerah Juara Lagu - an impressive feat especially for a newcomer.

The following year, 1997, Siti churned out not one but two albums. While Jerat Percintaan showed off her vocal chops, the song’s message about the trappings and complexities of love might come across a little too heavy for someone so young then.

Aku Cinta Padamu, which captured the idealisms of love from her sophomore album, gave off a more youthful vibe that better reflected her age.

Her second album of 1997, Cindai, was her first attempt at irama Malaysia. The budding singer had just only conquered the pop charts and was ready to take on new challenges outside the pop genre.

It paid off handsomely as the title track became one of Malaysia’s most iconic songs. She even performed it at the 1998 Commonwealth Games in Kuala Lumpur.

This song should come with a disclaimer: attempting to sing it may result in a sore throat - unless you’re Siti of course.

Possibly one of the most difficult songs to sing from Siti’s repertoire, Purnama Merindu (and its glass-shattering chorus) showed listeners what Siti can do with her voice.

She won first place at two international competitions - Shanghai Music Festival and Voice of Asia in 1999 - for her performance of the sprawling ballad.

As the 2000s rolled by, Siti, now in her 20s, developed a more rounded sound to her voice. This newfound vocal quality was first spotted in hits like Percayalah. The calming ballad washed over listeners like a wave - familiar yet refreshing.

Besides rapid career development, a lot was going on in Siti’s personal life during the 2000s. Rumours swirled that Siti was going to tie the knot with a mysterious businessman, Datuk K, now her husband of 14 years.

Biarlah Rahsia feels like a moving, personal letter Siti wrote to the public, opening up about the intense scrutiny she’s facing and the breaking point she has come to.

Siti kicked off the 2010s doing something she has never done before - she recorded her first full-length English album, All Your Love.

Not only did she explore a new language in her music, lead single Falling In Love saw the powerhouse diva venture into electronic dance music.

Now in her 30s and having experienced her fair share of life’s challenges, Siti gets decidedly more reflective in her 2014 album, Fragmen. Lead single Lebih Indah, which sports a unique chorus, is a hopeful tune for times of hopelessness.

One of the curveballs life threw at her was the harrowing motorcycle accident her husband got into while on holiday in New Zealand in 2012. Being so far away from Datuk K, Jaga Dia Untukku was her plea to God to keep him safe.

Siti has spoken about the fertility issues she faced and the 11 years she endured before finally welcoming her first child Siti Aafiyah in 2018. Comel Pipi Merah isn’t just an infectious lullaby, it’s a celebration of the miracle of life.

Released in February, 7 Nasihat, serves as a great prelude to her latest album ManifestaSiti 2020, which contains many of the irama Malaysia flavours she is known for.

7 Nasihat harks back to her irama Malaysia roots yet there is an unmistakable contemporary twist to it. It’s a beautiful harbinger of what’s to come in this new decade - she commits to staying true to her musical roots but is unafraid to gain new ground.

These overseas YouTubers are in awe of Malaysian singers 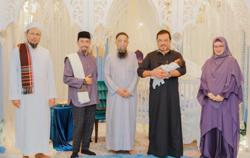