In 2009, Limkokwing University initiated a global campaign called Heal The World to raise funds to buy medical supplies to help the people in Gaza, Palestine.

The students back in 2009 recorded a song titled Heal The World, that was composed by both students and staff from Limkokwing Sound And Music Academy, for the cause. That campaign went further when UNICEF collaborated with the university.

In 2020, the song Heal The World has been given a new lease of life as the whole world is facing uncertain times due to the Covid-19 pandemic.

The new recording uses the 2009 song with additional vocals by international students currently based in Malaysia. It was done at the request of Lim, who’s been concerned with the repercussions of the outbreak

Lim said: “I am particularly troubled by the toll on both the infected as well as those affected by the lockdown.

“I hope the song will play a role in strengthening the resolve of people who need to cope with this unprecedented challenge.

“Through the use of youths from across the world we want to show that we are battling this situation together as people of one planet.”

It is also filled with images of frontline workers, many sharing the message to stay home and be safe.

Besides spreading the goodwill message through the song, the university is also preparing to donate masks and bottled water to the frontline health workers. 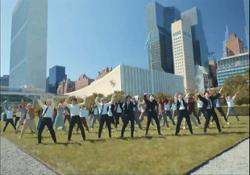