Kim had just completed his final engagement in Europe and was about to board a plane to New York, where he was scheduled to appear at Comic Con this week. After experiencing chest pains at the airport, Kim was taken for surgery to a nearby hospital, where he died on Oct 3. Photo: AP

According to a statement shared on Kim’s Instagram page, the South Korean artist had just completed his final engagement in Europe and was about to board a plane to New York, where he was scheduled to appear at Comic Con this week. After experiencing chest pains at the airport, Kim was taken for surgery to a nearby hospital, where he died.

“After having done so much for us, you can now put down your brushes,” wrote his collaborator, Hyun Jin Kim.

Kim was known for his exceptional ability to draw intricate illustrations entirely from memory, with no references whatsoever, on large canvases with his trusty brush pen. The talented craftsman - who also contributed artwork to graphic novels, as well as Marvel and DC comics - held the Guinness World Record for longest drawing by an individual.

“His sudden disappearance contrasts with the immense happiness he brought us,” read a statement from the Maghen gallery in Paris, where an exhibition of Kim’s work is on display.

“We are speechless. Daniel Maghen, the entire gallery team, and particularly Olivier Souillé, who had accompanied him for 10 years, are terribly affected by his loss. All our thoughts are turned to his family, his wife and his two children, his friends, his collaborators Kim Hyun Jin, Boin Lee, Jean-Christophe Caurette ... and his fans, for whom his disappearance will leave a great void.”

At the request of Kim’s family, his exhibition at the Maghen gallery will continue in the artist’s memory until Saturday.

Born in 1975 in the South Korean town of Goyang-si, Kim began sketching at an early age before studying art and design at Dong-Eui University in Busan, according to his artist bio. After attending college, Kim was required to serve two years in the South Korean army, where he pretended to draw poorly to avoid getting asked to sketch portraits of people’s loved ones.

“They didn’t really ask me too many favours,” Kim said in a 2018 interview with Proko.

“I don’t even draw my own family, so why should I have to draw someone else’s? There was another art student that joined a few months after me who ended up shouldering a whole lot of this burden. And when he later found out that I was actually very good at drawing, he got a little annoyed.”

While serving in the army, Kim memorised the structure of various weapons and vehicles, such as military aircraft, and began to draw them in his mind.

“Of course, it was a little scary, but my interests overrode any fear,” he told Proko. “I would keenly observe the gears and the guns and try to touch them and feel them if I could.”

“I have been told that my drawings are misogynistic, and I’ve had people ask me why I draw genitalia,” he told Proko. “Well, I draw them because they’re there."

Over the years, Kim’s sprawling, imaginative drawings have depicted all kinds of things: people, lions, tigers, mythical creatures, superheroes, cityscapes, battles and beyond. In addition to selling his sketch collections, collaborating with comic book publishers, teaching online art courses and displaying his work at galleries and events, Kim also entertained the masses in real time during his live drawing sessions.

While sketching elaborate portraits before an audience - sometimes over the course of several hours - the cartoonist would crack jokes and offer insight into his artistic process. Once his performances attracted a significant following, he held live drawing sessions in France, the United States and all over Asia.

On Wednesday, DC Comics Publisher Jim Lee hailed Kim via Twitter as “one (of) the absolute greats,” while Marvel Comics editor C.B. Cebulski said he was “still sitting here stunned” after learning of the artist’s death.

Kim “was a truly phenomenal talent whose pen and brush wizardry captivated and inspired millions of fans around the world,” Lee tweeted. “While he drew some incredible comics, it was his live drawing & his sketchbooks about his life, travels and dreams which spoke to me most. It was downright eerie and spellbinding to see someone with a near photographic memory bring an illustration to life with the style and flair that only Jung Gi could deliver.”

“There was no one quite like him,” Cebulski wrote. “Rest in peace.”

As of this year, Kim had published six sketchbooks that amount to approximately 4,500 pages worth of drawings spanning more than a decade. He also illustrated the Seung-Jin Park comic-book series “Tiger The Long Tail,” as well as the Bernard Werber novels The Paradise and Third Humanity.

Drawing is “as natural for me as breathing,” Kim told Proko in 2018.

“I’m not even thinking about what I’m drawing most of the time. If I can’t think of anything to draw, I just draw a person first and keep adding to it. ... I still find drawing fun, and I hope that I won’t lose that sense of joy for a long time.” – Los Angeles Times/Tribune News Service 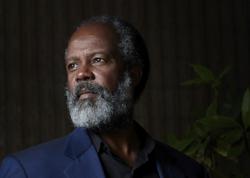