Climate activist group 'Letzte Generation' (Last Generation) members are seen glued to the frame of the painting 'Sistine Madonna' by Raffael at the Gemaeldegalerie Museum in Dresden, Germany on Aug 23. Photo: AP

A group that represents cultural organisations in Germany criticised climate activists on Thursday for gluing themselves to the frames of famous paintings in museums to protest what they say is the German government’s failure to act against climate change.

The German Cultural Council, an umbrella group of cultural organisations, accused the activists of endangering important works with their protest and warned them not to pit art against the cause of curbing global warming.

"As much as I can understand the despair of the climate activists, I say clearly that the act of gluing themselves to the frames of famous works of art is clearly wrong. The risk of damaging the artworks is very high," said Olaf Zimmermann, the German Cultural Council's managing director.

"The works put in danger are part of world cultural heritage and deserve to be protected as well as our climate,” he added.

Members of the group Uprising of the Last Generation glued themselves to Nicolas Poussinthe's 1651 painting Landscape During A Thunderstorm With Pyramus And Thisbe at the Staedel Museum in Frankfurt on Wednesday.

Earlier this week, two activists glued their hands to the golden frame of Raffael's Sistine Madonna at the Gemaeldegalerie museum in Dresden. In both cases, police were called to the museums to carefully detach the activists’ hands from the frames.

The activists also blocked dozens of roads across Germany this year by gluing themselves to the asphalt.

With their unusual forms of protest, Last General activists members say they are trying to make it impossible for people and governments to ignore the world has only a short time to prevent catastrophic levels of global warming.

"Climate catastrophe is an unprecedented threat of incredible proportions: killer droughts, devastating heat, all-consuming forest fires. These will increase dramatically in the coming years. Not just here in Germany...but worldwide,” said Jakob Beyer, a 28-year-old activist who glued himself to the frame of Sistine Madonna, one of the most famous paintings of the Italian Renaissance.

Similar protests have been carried out by activists in other European countries.

In London, they targeted a copy of Leonardo da Vinci’s The Last Supper at the Royal Academy of Arts, glueing themselves to the painting’s frame and spray-painting "No New Oil” next to it last month.

In Italy, protesters glued themselves to one of the Vatican Museums' most important ancient sculptures this month. Activists earlier glued their hands to the glass window protecting Sandro Botticelli’s painting Spring in the Uffizi Galleries in Florence. In that case, they were detained and ordered to stay out of Florence for three years, Italian media said. - AP 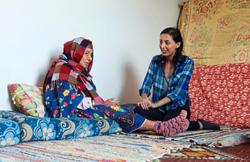