Why this fund manager paid US$15mil for a painting estimated at US$200,000

Ernie Barnes’ 'The Sugar Shack' (1976) painting. It’s a duplicate of the painting Barnes made for Marvin Gaye’s studio album 'I Want You' and is the image featured in the 1970s sitcom 'Good Times'. Photo: Christie's

The Houston-based hedge fund manager Bill Perkins walked into Christie’s on May 12, planning to spend US$2mil (RM8.8mil). An hour or so later, he left having spent US$15,275,000 (approximately RM69mil).

"The plans went awry, to put it mildly,” he says, speaking the next day. "I was shocked, but I knew it was a possibility.”

Perkins had come to Christie’s in New York for the express purpose of buying The Sugar Shack, a 1976 painting by the football player-turned-artist Ernie Barnes, whose work has belatedly been recognised as a seminal part of postwar American art. The painting in question depicts a dance hall populated by joyous Black dancers and musicians. It’s a duplicate of the painting Barnes made for Marvin Gaye’s studio album I Want You and is the image featured in the 1970s sitcom Good Times.

"In my mind, there’s nothing more American than that piece of art,” Perkins says.

He had coveted the work for years, going so far as trying to buy the painting’s sister work from the actor Eddie Murphy.

"I actually hunted down Eddie Murphy’s assistant and tried to buy the album cover, and got crickets,” Perkins says, laughing. "They were like, ‘Who’s this nutball?’ They didn’t even give me the dignity of a ‘no.’”

So when he saw this work was coming up for auction, he continues, "tears welled in my eyes just thinking about it.”

Perkins founded the fund Skylar Capital Management and is a serial entrepreneur, author of the book Die With Zero, and self-described "avid amateur” poker player who’s won millions of dollars in various tournaments. (When a journalist pointed out that most amateurs don’t win millions of dollars, he responded: "That is true, but I’ve lost millions, too. So let’s not forget that.”)

He’d already assembled a significant collection of art - he says he has four works by Barnes, five pieces by John Biggers, along with art by Norman Lewis, Charles White, and others. But until Thursday night, he hadn’t been on the floor of an auction sales room before.

"I’ve been at charity events where they auction a piece of art,” he says. "But I’ve never been at a proper art auction, live, in the room.”

He wanted the Barnes so badly that he decided he had to go in person. "I was hyperparanoid,” he says. "What if my phone dies, what if my Internet goes down? I had these horrible visions in my head of stuff that could go wrong, so I was like, ‘I need to be in the room where it happens so nothing can go wrong.’”

"I was going to be ecstatic if (the final price) was sub-US$1mil,” he says, "and I thought it reasonably could sell for between US$1.5mil to US$2mil.”

As soon as the lot came up and the auctioneer Adrien Meyer announced, from the podium, that there were 22 people bidding on the phone for the painting, Perkins knew things wouldn’t go as planned. "I was like, ‘Where did all these people come from?’” he says. "And so I decided to crawl out of it, get it high enough, and be done with it.”

And so began one of the most dramatic bidding wars in recent memory.

At first, auction house specialists in the phone banks ringing the auction floor were shouting over one another with bids. The price shot up to US$950,000, then US$1.8mil, and suddenly it was US$2mil. By the time bidding had reached US$2.6mil, though, the room had quieted down, with the main action between Perkins, seated in the back with his fiancée, and a man a few seats away who appeared to be speaking on the phone to a client. "We were like, ‘We have to have our poker faces on,’” Perkins says. "But that went completely out the window.”

Throwing out bids that jumped by US$100,000, US$200,000, and even US$500,000 increments at one point, the two men went back and forth, as the entire auction room, riveted, watched in silence. At about US$5mil, "I turned to my fiancée and I was like, ‘What should I do?’” Perkins says. Wisely, "she said, ‘Babe, you have to make this decision yourself.’” At that point, he continues, "I looked around the room, and everyone was looking at me. And I was like, ‘Oh God, this is a scene.’”

Bidding continued. It was US$8mil, then US$9mil. "The guy turned to me at one point and goes, ‘I’m not going to stop,’” says Perkins. "And so I said, ‘Then I’m going to make you pay.’” (People in earshot laughed in delight.)

Suddenly it was at US$10mil, then US$10.5mil, then US$11mil. Perkins tried to shut the bidding down by offering US$12mil, but the adviser countered with US$12.5mil. With every bid at this level, there were audible gasps on the sales floor.

Finally, Perkins bid US$13mil, and the man on the phone had had enough, signalling he was out. The room burst into long, sustained applause, and Perkins, looking a little stunned, got up and left. With auction fees known as the buyer’s premium, the total price came to just over US$15mil.

"There was so much going on in my head,” he says. "There was the very analytical side, like ‘Did I get the value right,’ and the emotional side of me was like, ‘F*** yeah, it’s mine!’”

Perkins celebrated at Blue Ribbon restaurant with his fiancée "and just took it in and marvelled at the journey to get to this place, and the convergence of it all,” he says. "And the fact of how absurd my life is, that I can own this painting. It’s completely absurd.”

He plans to loan it to a museum for a few months "to let other people connect with it. It means a lot to America, and it definitely means a lot to Black America,” he says, "and then I’m going to hang it in my house.”

He says he has absolutely no regrets. 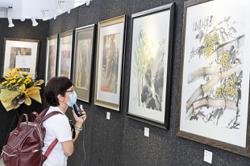 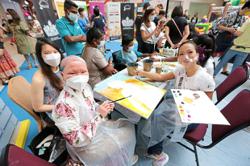