'Through this project I hope to introduce this mangrove forest reserve (to people who might not know about it) and promote clean and green nature along with raising awareness about the historical sites and attractions nearby,' says Fuen Chin. Photo: Fuen Chin

Now back in her hometown of Sungai Petani, Kedah, Chin has come from exploring botanic gardens and landfills to her latest offering coming from deep within the mangrove enclosures at the Merbok River biosphere reserve.

In a series of 15 interconnected panels, Hypermorph Garden 4.0 – the latest instalment of her award-winning horticulture series – depicts the beauty and balance of a thriving ecosystem that makes up the Kedah seawater swamps.

As a child, Chin’s senses were awakened by the smells and sights of her family’s Chinese herbal store where she spent a significant chunk of her childhood.

Arriving on Malaysia’s shores from southern China, Chin’s grandparents took their knowledge of traditional remedies and medicine to establish a small herbal shop.

Acrid, bitter, sweet and sour smells and tastes swirled around her, embedding themselves in her mind and ideas.

The shop, she says, was also the first place she encountered Chinese writing, looking up at the pictorial characters that marked the wooden drawers, indicating which herbs were stored where. 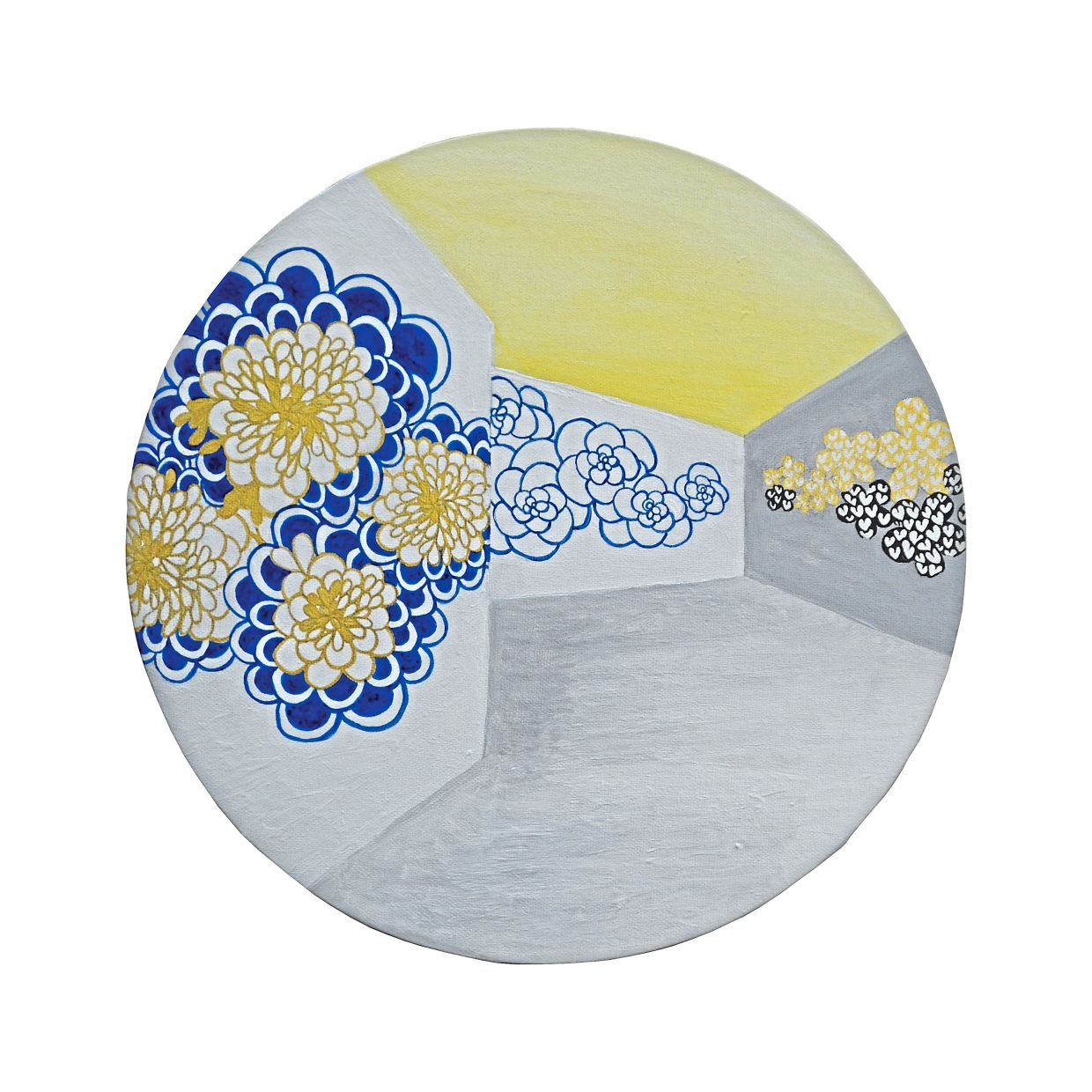 For 'Hypermorph Garden 3.0', Fuen Chin created a virtual and physical exhibition of a static ‘fake’ garden’ in blue and gold. Photo: Fuen Chin

“The shop was where I established my first contact with Chinese calligraphy. Now, most of my calligraphic paintings depict horticulture-related phenomena. I think that is a nostalgic reflection of my childhood in the herbal shop,” she says.

After secondary school, Chin apprenticed at a garment shop and worked as a junior fashion buyer at a department store.

“However, there was much more math involved in the job than I expected and I didn’t last long there!” she adds.

At 21, Chin took a growing portfolio she had been working on to a British education fair and secured a spot at the London College of Fashion.

After her undergraduate studies, she worked as a fashion designer in Malaysia and China and also tutored design students in Shanghai.

Fashion design often bled into drawing and colouring and venturing into the art world was soon a logical and inevitable next step.

“I have always loved to draw and scribble since I was a child. After working several years abroad, I made my first painting on canvas in 2008 and have been painting ever since,” says Chin.

Self-taught, she later applied to the Royal College of Art in her late 30s and completed a fine art research degree that focused on the evolution of the Chinese pictorial writing system.

The horticulture-related experiences of her childhood coupled with a fascination with Chinese calligraphy eventually gave rise to Chin’s noted Hypermorph Garden in 2019.

“Metamorphosis, the term inspired me. I looked into it and found Muller’s terms and liked one in particular – hypermorph – that means a mutation that causes an increase in normal gene function. “So, I decided to speculate from the literal interpretation and develop a series of paintings about nature,” explains Chin, 43.

The mixed-media artwork with strong floral and circular motives took almost a month to be completed and focused on the future of man-made gardens.

“I thought of home gardens, community gardens and botanic gardens in the future. Climate changes, such as prolonged rainy seasons, extreme hot weather and great temperature differences cause flooding, forest fires, sickness and lost habitats for animals. How are man-made, artificial gardens to survive in such circumstances?” wonders Chin.

This artwork, which was selected as one of the top 100 submissions in The Social Art Award 2021 held by Berlin-based ​Institute for Art and Innovation (IFAI), was followed by a second instalment in 2020, featuring upcycled yarn and fabric from landfills.

“I went to a fabric landfill. I put on a face mask, a pair of gloves and collected some of the waste. Then, I separated the fabrics and yarns by picking them one by one. In this process, I managed to select some of them that were in ‘good’ condition.

“Then, I had to throw away almost 40% of them because they were polluted and hazardous,” recalls Chin.

But with the remaining fabric scraps that were then sanitised, Chin joined them together, elongated them to their maximum length and rolled them into balls as points of interest in Hypermorph Garden 2.0. “Each yarn ball represents what was once fashionable and now goes unnoticed in a landfill,” she expounds.

For Hypermorph Garden 3.0, which was also recognised by IFAI last year with a Social Award for Public Spaces, a virtual and physical exhibition of a static “fake” garden was created in blue and gold.

“A group of roses with blue outline and a group of blue peonies with gold cores; these flowers present a fake garden.

They stay on the wall. They seem to be immortal. Will that be the portrait of the future garden?” says Chin.

With an easing of pandemic regulations late last year, Chin and her team went big in presenting her latest offering in the Hypermorph series.

Supported by the Cultural Economy Development Agency (Cendana) and Sungai Petani Municipal Council, a white dome spanning 10m in diameter was erected at the Semeling Jetty in mid-December.

A point of attraction due to its size and standing alone, the dome also had a practical purpose as there was no existing structure in the area that could house Chin’s massive 18.3m-long creation.

“The series has 15 pieces of mixed media paintings, in which the content on each canvas is interconnected to each other to elaborate a comprehensive scene around the mangrove forest. 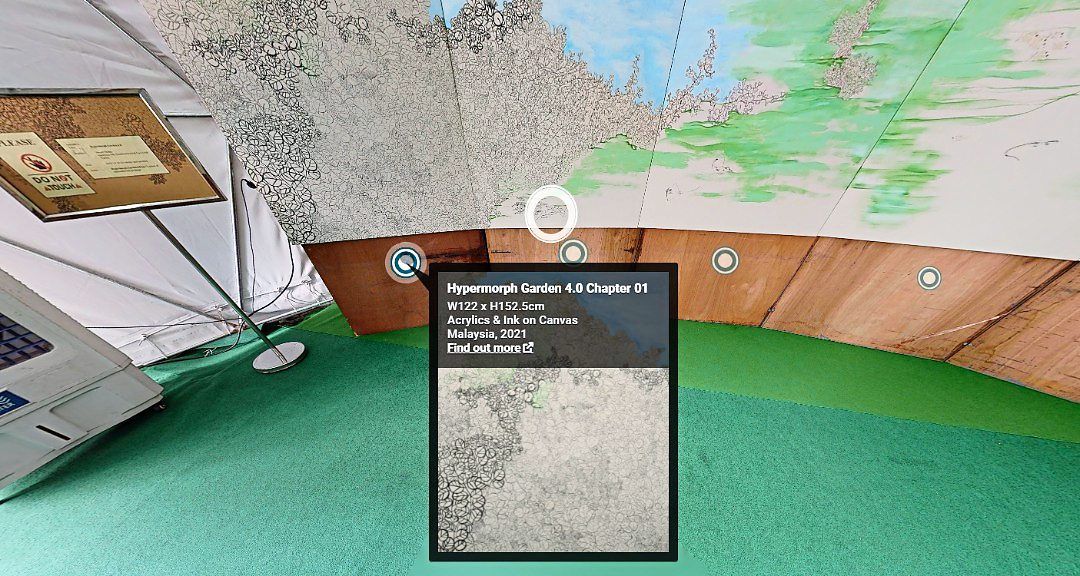 “Going back to Muller’s morph terms and ‘hypermorph’ meaning a mutation that causes an increase in normal gene function, I think this definition explicitly elaborates my speculations that nature around this location (in Sungai Petani) could have mutated and survived through ancient civilisations,” says Chin, pointing out the Sungai Batu Archaeological Site, Tupah Recreational Forest, Bujang Valley archaeological site and Mount Jerai, seen at a distance.

In Hypermorph Garden 4.0, mangrove apple trees and white-flowered holly mangroves are seen blooming by the riverside while longtail butterfly rays swirl and dive.

Nearby, a family of silvery langurs sit in front of an empty gazebo while gold-spotted spinefoot fish and golden puffers swim a stone’s throw away.

Mount Jerai is observed amidst a clear sky and lower down, brick and smelting structures are found – whispers from generations long past.

“In Chapter 13 (the 13th panel in the installation) we see that the mangrove forest could have mutated and survived on the concrete structures. Fishes, such as long-spined tripodfish, tropical sand goby, ponyfishes and the many-lined sun skink could also have survived from the mutations,” says Chin. 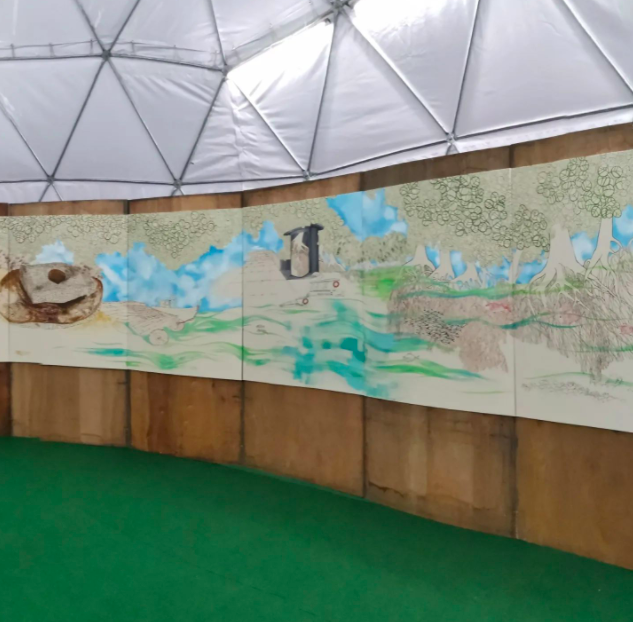 'The series has 15 pieces of mixed media paintings, in which the content on each canvas is interconnected to each other to elaborate a comprehensive scene around the mangrove forest,' says Fuen Chin about her 'Hypermorph Garden 4.0' series. Photo: Fuen Chin

The installation was housed under the dome until Dec 22 after which strong rains and bad weather resulted in the team dismantling the structure.

However, an interactive digital version of Hypermorph Garden 4.0 has been created using 3D scanning along with drone shooting and artwork photography and can be accessed on Chin’s webpage.

“When we were planning to present this artwork earlier in the year, we actually envisioned it to be fully online.

“Even though we only managed to have the dome up for a few days, that was a nice addition and we did manage to get all the shooting done to set up the virtual artwork,” says Chin.

Viewers are able to “walk” comfortably around the dome in this digital installation and each panel can be looked at from multiple angles and zoomed in to impressive detail.

“This forest featured here has splendid salt-tolerant trees and they provide a buffer zone to protect the land from wind and wave damage.

“Through this project I hope to introduce this mangrove forest reserve (to people who might not know about it) and promote clean and green nature along with raising awareness about the historical sites and attractions nearby.