Meet Naomi, DC Comics’ newest breakout star, who has not only joined the Justice League, but has her own TV show too.

A few of weeks ago, a new superhero made her debut in the Arrowverse (the name given to TV shows based on DC Comics characters on US television network The CW). Her name is... Naomi. 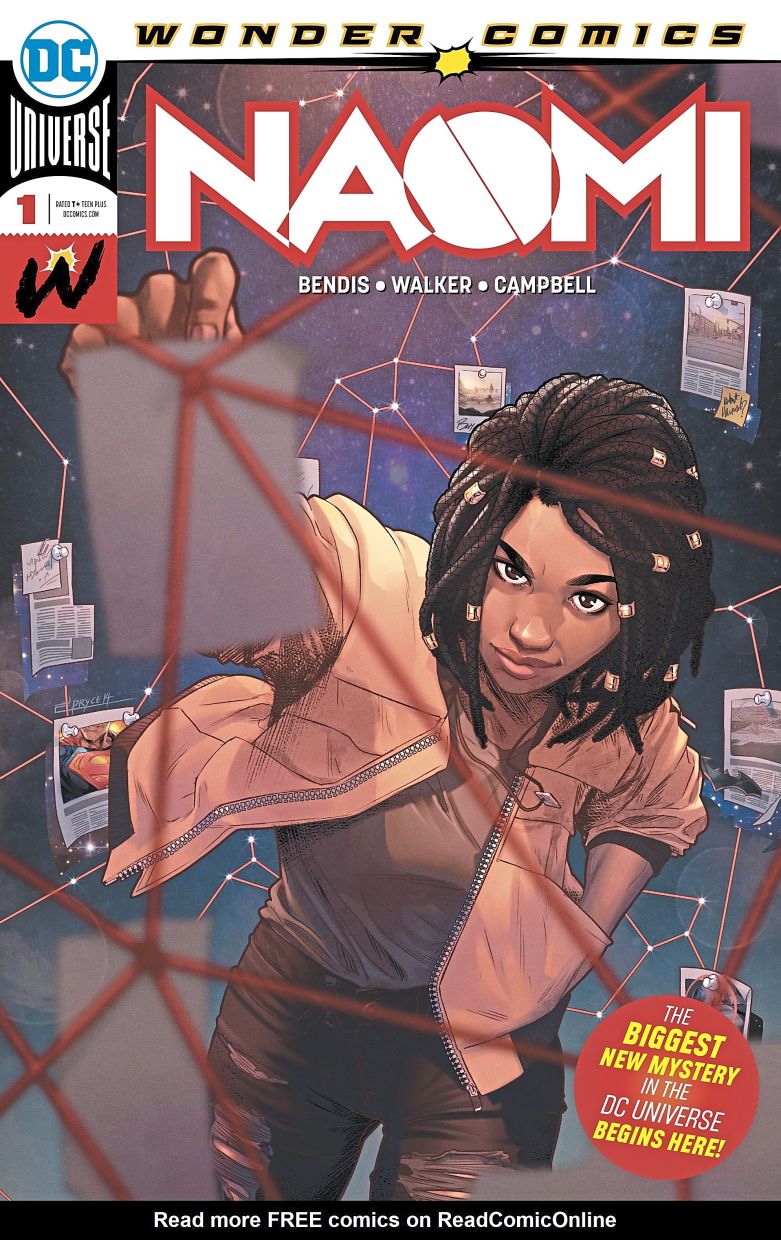 The new hero made her debut with her own eponymous title in 2019.Her full name is Naomi McDuffie, but how many superheroes do you know who go by their full names?

Naomi also has her own DC Comics logo and all that. Created by Brian Michael Bendis for the teen-oriented Wonder Comics imprint, together with writer David F. Walker and artist Jamal Campbell, Naomi is currently going great guns in the DC universe, joining two of the publisher’s highest profile super teams within months of making her debut – the Young Justice and the Justice League.

But in case you’re wondering who Naomi is, here is a quick lowdown on DC Comics’ latest superhero superstar.

When we first meet Naomi in 2019’s Naomi #1, she is just an ordinary high school girl in the little town of Port Oswego, and runs one of the biggest Superman fan websites in the world. Then, one day, the sleepy town witnesses a fight between Superman and Mongol, and that event causes Naomi to start investigating her own origin.

Fun fact: Naomi’s surname, McDuffie, is a tribute to late comics great Dwayne McDuffie, who co-founded Milestone Media in 1993, and was a great champion of minority representation in American comics. Naomi may be relatively new to the DC universe but she's already rubbed shoulders with Superman and Batman.As it turns out, Naomi is actually from another Earth, and was sent to Earth-0 by her parents, who were trying to save her from a big bad villain named Zumbado. It’s not clear which Earth she is from exactly – not even Ray Palmer (The Atom) could figure out which part of the multiverse she is from.

The Earth she is from is almost the same as Earth-0, but with a few major differences. On her home world, the planet’s ozone layer degraded to the extent that an unknown radioactive energy was able to seep into the planet, and “infecting” 29 random people across the planet, giving them god-like superpowers.

Naomi is the child of two of these superheroes, and is in fact, the first child born to two of these new metahumans. In order to save her from Zumbado, Naomi’s parents found a way to send her to Earth-0, where she was adopted by Greg Duffie and his wife.

As luck would have it, Naomi’s adoptive parents are not what they seem either. Or to be more specific, her father is the one with secrets – he’s not even human!

“Greg” is actually an elite soldier from Rann who was sent to Earth to flush out an enemy soldier from Thanagar (the planet Hawkman and Hawkgirl are from). Once here, he fell in love with a human and stayed on Earth for good.

Oh, and the Thanagarian he was sent to seek out is called Dee, and was working as a mechanic in Port Oswego. Dee was also there during the incident where Naomi was sent through the portal into Earth-0, and hence, also feels a sense of responsibility towards Naomi’s well-being. Zumbado is the biggest, meanest baddie from Naomi’s home world. — Photos: DC ComicsNot all the 29 people who were given powers on Naomi’s home world were heroes – the aforementioned Zumbado is actually a serial killer who was on his way to his execution when he received his “gift”.

Because of her legacy and potential threat, Zumbado sought to eliminate her to establish his authority. He managed to kill her parents, but not before they sent her to Earth-0.

When Naomi’s power finally manifested, Zumbado managed to open a portal into Earth-0 and took Naomi back to her home dimension.

After a brief battle (in which Naomi manages to break free of Zumbado with a single punch!), she manages to escape back to Earth-0, where she decides to leave Port Oswego in order to learn more about her powers.

Her first stop? Metropolis, where she meets Superman and Batman, and asks for their help. 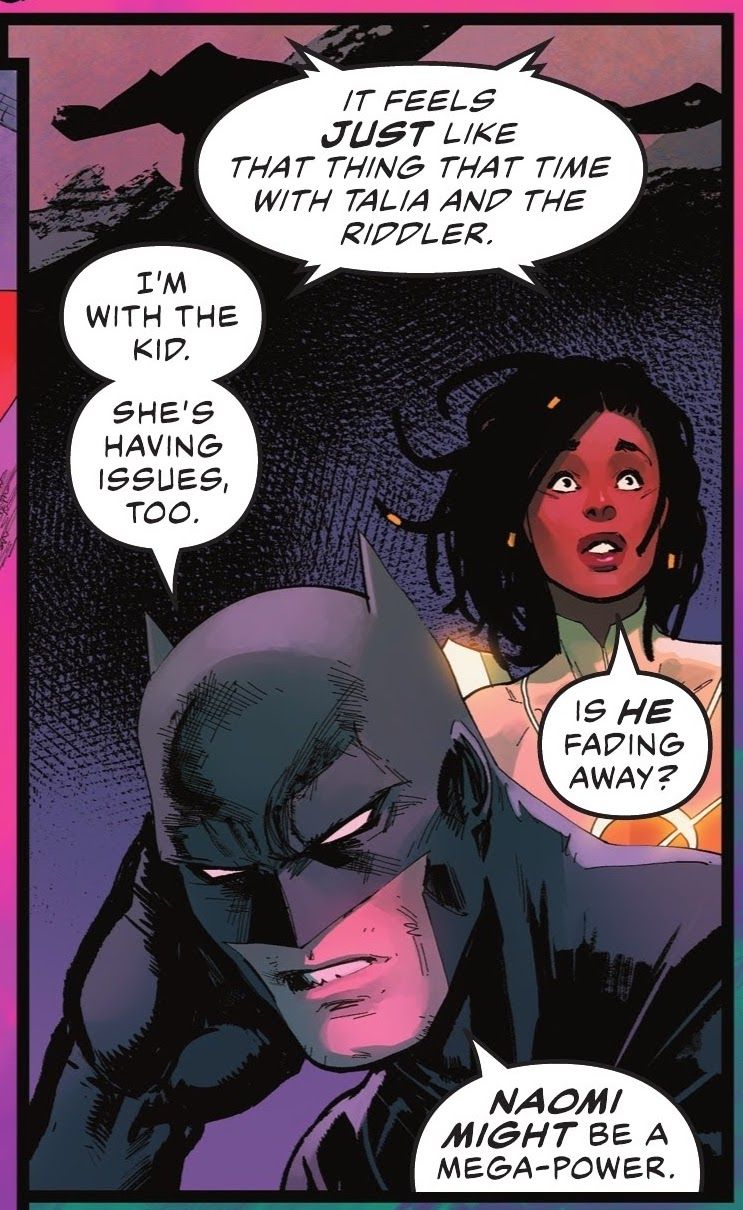 Does that mean her powers are like Mega Man's?Naomi is such a powerful hero that Batman even coins a new term to categorise her – “mega-power”, which puts her on the same level as Superman!

Her powers include flight, superhuman strength and durability, energy projection and blasts, and also the ability to form a golden armour when she uses her power.

New powers, who this?

Sure, she’s powerful, but Naomi does have her weaknesses as well, and for now, it’s... inexperience. Well, sort of. At the moment, Naomi is still learning about her powers, and doesn’t quite understand just how much she has, nor how to control them properly. She is also prone to fainting after using too much power (just like Molly of Marvel’s Runaways).

With great powers also come great weaknesses, and I have a hunch we haven’t seen Naomi’s true weakness yet, or her Kryptonite, if you will.

Naomi doesn’t appear to have a codename for now. In Justice League #61, Aquaman appears to call her “Powerhouse”, but that could just be a reference to her power levels rather than an attempt to give her a proper superhero codename.

Besides, she’s got her own “Naomi” logo, so we don’t see that changing anytime soon. 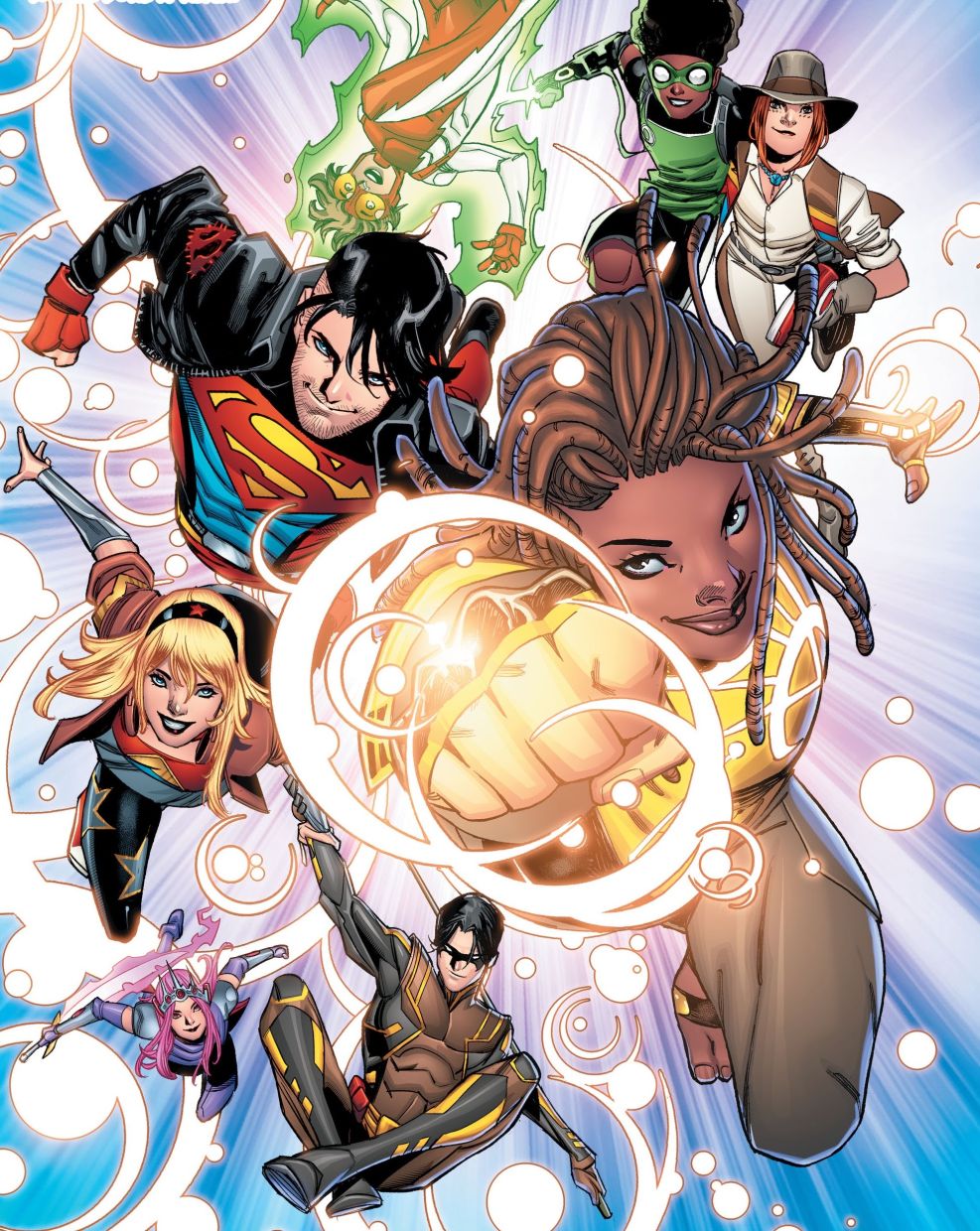 Within months of her debut, Naomi had already joined the new Young Justice.Within a few days of getting her powers, Naomi was already hanging out with the Young Justice team, after the team returned home from a multiversal jaunt. As if that wasn’t enough, her parents even let them crash in the McDuffie home for a while.

When Bendis and artist David Marquez took over creative duties on the core Justice League title, they wasted no time in bringing the new teen hero into the fold. Earth-0 is attacked by a new interdimensional villain known as Brutus, and the Justice League discover that he comes from the same alternate universe as Naomi, hence they decide to seek her out to help with this new threat.

They later take a trip to Naomi’s homeworld for a while, where they meet Zumbado himself and get their butts kicked. When they get back to Earth-0, Batman and the rest of the Justice League decide that her knowledge of her homeworld could come in handy should Zumbado decide to launch a full-scale attack, and officially induct her into the team.

Not bad for a new superhero, eh?

WATCH: 'The Batman' trailer sees sparks fly between the Caped Crusader and Catwoman