Mathan Rajasingam (as Riki the Flying Fox) will take the audience through the stories and music of 'Asli – Resonance In Our Roots', an online performance. Photo: Yasodhaa Padmanathan

Settle in for a ride with Riki the Flying Fox as he takes you on a trip around the different landscapes he calls home in Asli – Resonance In Our Roots on Dec 5.

In this online performance of live music, puppetry and folklore, the vivacious Riki, played by Mathan Rajasingam, will whisk viewers from the comfort of their homes to the caves of Kelantan, the foothills of Mount Kinabalu, the forests and the wetlands, where we will meet a host of old world characters as well as new stories created for this show.

In one act, we are introduced to Sang Kelembai, a Malay folk tale about a Giantess with the power of petrification.

In another, we delve into The Snake’s Hiss from India that follows the adventures of Pambu the Snake and Parashar the Wise Man.

Then, a Rothschild’s Slipper Orchid (also known as a Sumazau Orchid) will narrate the stories of giant king Gayo Nakan and the supreme beings of Kinoingan and Suminundu.

The Great Race of the Chinese Zodiac and Terengganu’s Ulek Mayang legend of the seven sea princesses also make an appearance here.

This project is presented by sitar player and visual arts teacher Kalpana Paranjothy in collaboration with The Temple of Fine Arts. It is supported by Cendana Malaysia.

Stories with a message

“Asli – Resonance In Our Roots hopes to create an awareness of the country’s natural environment and the importance of preserving and protecting this heritage. The folk tales contain various lessons and values that help us reflect on how our identities, sense of belonging and community is inextricably linked to nature,” says Kalpana.

“We also want audiences to understand more about the indigenous communities and that while they are in the frontlines of many environmental crises, their fight is a fight all Malaysians should support as we all stand to lose the same heritage.”

This show intends to engage with a younger audience, conveying values from these stories that they can use in their everyday lives such as respect, care and compassion for human and non-human neighbours, and helping each other.

“We want to bring entertainment and storytelling to children through a more visceral approach. This is crucial as we see in today’s age, children are increasingly disconnected from nature. By using music, visual arts, literature and theatre, this project will offer them an immersive experience.

“This performance will be fun and relevant for all age groups as folk tales are evergreen. We have original music composed and varied styles of puppetry designed for this show which will present these stories in a new light,” she adds.

Asli – Resonance In Our Roots is written by freelance environmental journalist and conservation communicator Nadiah Rosli, with visuals and puppetry by artist Deepa Rajendra.

A total of 14 musicians and puppeteers will bring the stories to life, including Swathi Sivadas on piano, Hariraam Lam Tingyuan on violin/gambus, Shweta Baskaran on sitar, Sim Er Wen on erhu and Mohd Hisharudy on rebab and percussion.

Riki the Flying Fox will be the narrator.

Kalpana notes that the characters, settings and storylines are set locally, which gives an insight into the relationship local communities have with their environment and the biodiversity in a specific area at the time.

“Given that Malaysia is a diverse, multiracial and multi-faith nation, the cultural and moral values found in these stories stand the test of time. The selection of folk tales is meant to be inclusive (highlighting different ethnicities and geographical locations) and to mainstream indigenous stories to Malaysians. “The characters/narrators have distinctive personalities based on what species they are and where they are from (based on factual references), and language used is also meant to be easy to follow and engaging for younger audiences,” she says.

“According to Tok Sali, the lyrics call upon the (Orang Asli) youths to be an agent of change and to protect their natural and cultural heritage, especially the rainforests.

“Their collaboration on this production comprises performing this song and collaborating with the other musicians in the opening and finale with the intention of building connections through music,” she shares.

Asli – Resonance In Our Roots was originally meant to be a live performance, but due to public health safety considerations, especially with regards to younger members of the audience, a decision was made to present it as a digital showcase.

However, there is also an option of attending a physical screening of the performance video at The Temple Of Fine Arts in Brickfields, Kuala Lumpur at 6pm on Dec 5.

The one-hour plus show at Kanagasabai Hall will be presented in English with Bahasa Malaysia subtitles.

Proceeds will go towards helping the Orang Asli community. 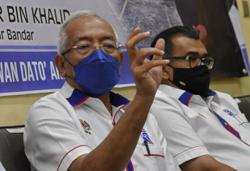