Contemporary artist Jun Ong’s site-specific installation Star/KL is an explosion of light, with fragments scattered near and far.

Its rays look like they pierce through all four floors of The Godown KL’s Air Building (an open-air extension of the main space) and extend beyond this area – even stretching out and touching some nearby buildings.

Ong’s light installation’s arrival is timely as it signals this Kuala Lumpur arts venue’s return to action after nearly two years in the pandemic shadows.

Accompanied by a soundscape designed by Reza Othman of experimental music project RAO, Star/KL, which will be running daily until March 26 at The Godown KL, shines the brightest at night.

But it is a sight to behold during the day too, with its acrylic tubes, steel and LED ropes juxtaposed against the cold concrete and metal of the Air Building.

“The installation will be open during the day and night as I want people to see both the materiality of the structure during the day, and how it takes on an ethereal effect when it comes to life in the evening. I have always tried to experiment with how artificial light and natural light could co-exist. I would say that Star/KL is the artwork that best represents my ideas to date in terms of scale, architecture, materiality, technology and human experience,” says Ong. ‘The Star/KL installation will be open during the day and night as I want people to see both the materiality of the structure during the day, and how it takes on an ethereal effect when it comes to life in the evening,’ says Ong. Photo: The Star/Azlina Abdullah

The Star/KL, launched last weekend, is a project carried out in collaboration with the Cultural Economy Development Agency (Cendana) as part of its Art In The City 2021 programme.

Before this iteration at The Godown, Ong’s Star found a temporary home in an unfinished concrete building in Butterworth, Penang in 2015.

Back then, the installation was a huge star that pierced through the walls and concrete slabs of the structure.

Star was nominated for the World’s Best in Spatial Art at the Media Architecture Biennale, Sydney, Australia, in 2016.

Six years later, its reincarnation in KL is a radiant starburst, with a steady stream of visitors experiencing the capital’s glowing response to the arts and culture recovery effort.

“As with Star in Penang, Star/KL started with a thorough analysis of the building architecture and materiality. Star/KL is located at the new extension of The Godown, which is situated in such an interesting location, at the threshold of nature (foothill of Bukit Nanas) and the concrete jungle. We have had bats, foxes, monkeys and butterflies drawn to the space.

"I love the openness and rawness of the building designed by architect Ling Hao and felt that a new variation of Star could take place here,” says Ong, who is the co-founder of the spatial design studio POW Ideas and a lecturer in lighting design at a local university. 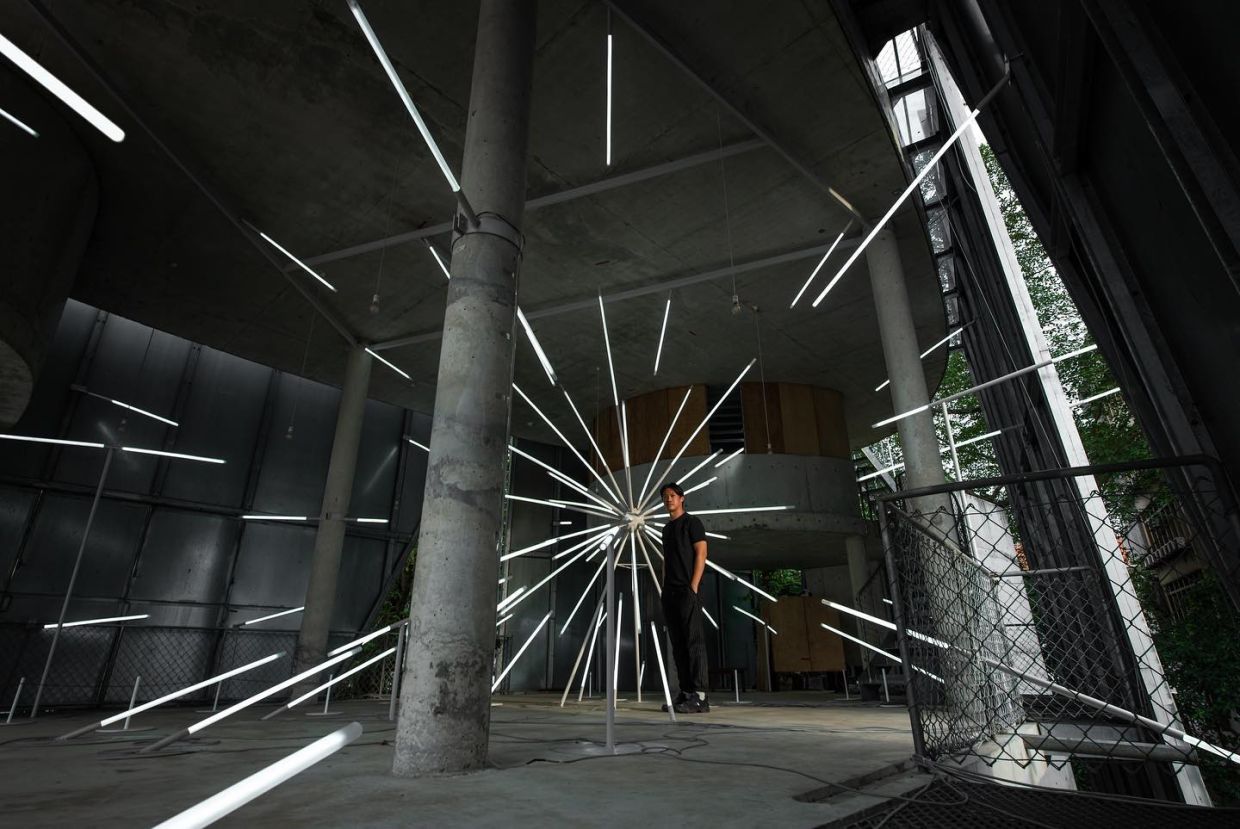 If you need an Instagram fix, catch 'Star/KL' in the evening for the best effect. Photo: David Yeow

“For me, the illuminated tubes and lines that I have in most of my works are an extension of our household fluorescent tubes – how they exist in our different aspects of daily lives and have become a universal placemaking object. I also like that artificial lighting has the capability to be synced with other mediums – sound, programming, kinetic, and so on, and to then extend the different ways we can interact with it,” he says.

Today, he works with mostly artificial lighting (LED) and in cool white because of his interest in its purity yet man-made imagery.

In conjunction with Star/KL, there will be a series of workshops and events open to the public.

“I hope everyone finds their own connection to Star/KL, whether as a geometrical object, a technological sculpture or simply a beautiful starburst. It is a poignant moment where we are slowly finding balance in a pandemic and I am hoping that as the artwork is decentralised in form, it will be accessible to all,” says Ong.

Over at REXKL, a former post-war cinema building, the masses can look forward to diving into the realm of Sensorium Of Inversion/Immersion (SENSORii), an exhibit that straddles tech ambition and human emotion. For this project, the artists were tasked to investigate how people perceived the internal/external worlds. Visitors are encouraged to explore the artists’ various digital media, where diverse stories will be told.

Entering the REXKL old cinema hall will now be like entering a movie, reveals Yap. Visitors will be greeted by a (14m x 14m x 7m) triangular structure, on which the media works will be projected.

“The idea with SENSORii is to put the audience as an active participant inside that space. Normally, we see videos projected on a large cinema screen. Now, it has been brought close to us and we are in it. Yes, it is immersive and you might be overwhelmed by the music and the visuals and the music,” says Yap.

“The experience will not be the same as your previous one. The sensation will be very different,” says Yap. In 'Checkpoint' by FLUX28 Studio, visitors will experience a journey of conflicting inner and outer worlds. It is part of the 'SENSORii' project at REXKL. Photo: Handout

In Checkpoint by FLUX28 Studio, visitors will experience a character’s turbulent journey of conflicting inner and outer worlds in this narrative-driven experimental film.

“This can be very overwhelming for people. And that’s good. That’s what we want people to experience,” says Talha K, Flux 28’s director.

It predicts the beginning of artificial life based on the convergence of biological and digital life, using microscopic footage and cinematographic techniques.

Wee Jia Foong’s Through The Lens Of Fire uses family photographs gathered from close friends which are then deconstructed, exaggerated, and amplified, implying a new aesthetic appreciation. Consider it digital poetry. Wee Jia Foong’s 'Through The Lens Of Fire' uses family photographs which are deconstructed, exaggerated, and amplified. Photo: Handout

It offers a dreamscape trail where guardian spirits exist and explore the shared intangible heritage of the people of South-East Asia.

SENSORii is part of the Art In The City 2021 programme.

A state of trance

In December, Cahaya 004 – Kitab Basah, an immersive audio visual series of shows at Publika in KL will reimagine the concept of light while exploring the intersections of contemporary and traditional art forms.

Merging light sculptures, ambience music and a live kuda kepang performance (a tradition Malay art form from Johor), the show explores the concept of the unseen and unseen world.

It is set to present a trance-like experience at Publika’s Black Box venue on Dec 18. The design concept of 'Cahaya 004 - Kitab Basah' is a reflection of the kuda kepang process, rituals, and ceremonies. Photo: Pusaka

“The moment you step into the space, it’s almost like stepping into another realm,” says Taufiq Kamal, the founder of creative arts agency Senilab, which is presenting the Cahaya series.

“The design concept of Cahaya 004 is a reflection of the kuda kepang process, rituals, and ceremonies. We want to highlight these through our light sculptures.

“For instance, we’re building an offering table, where kemenyan (benzoin) will be lit to smoke the horses and the instruments. We are also making light sculptures to represent the four pillars. This is for the ‘buka pagar’ ceremony where the spirits will be invited in. We are also building a chandelier sculpture that will hang on top of the stage,” he adds.

Hundreds of fluorescent light tubes and LED lights will be fitted to custom-made structures to illuminate the performance space. The idea is to create a spiritual space to tap into the kuda kepang’s spellbinding energy. 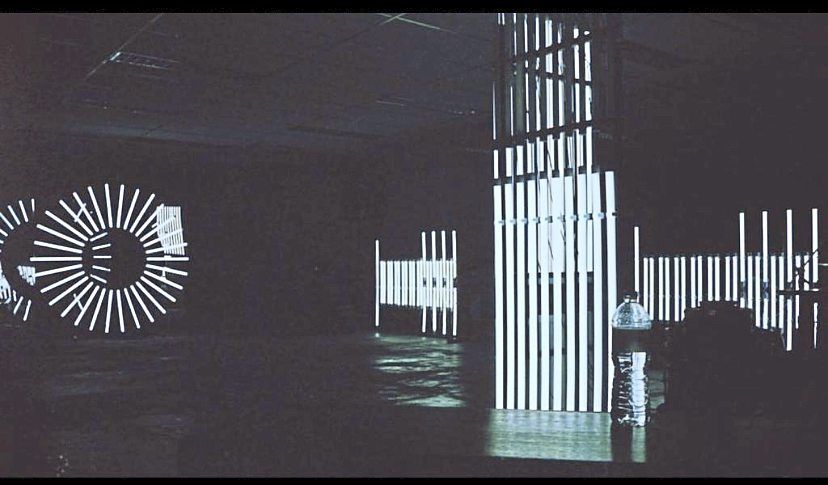 The free admission shows on Dec 18 will run for two hours, taking up two time slots: 5pm and 8.30pm.

The performances will also include live deejay sets, something to catch the imagination for those who have not set foot into a dance club for two years because of pandemic restrictions.

Zulamran explains that both deejaying and kuda kepang are improvisatory in nature.

“We added this element in to see how the dancers will respond and improvise, creating a new kuda kepang experience for everyone.”

Zulamran and Taufiq will also perform as deejays with the help of DJ SHFQ.

Pauline Fan, Pusaka’s creative director, believes this new and innovative presentation of the kuda kepang helps to bridge a generation gap to reach a younger audience.

“However, for these local youth, collaborations like Cahaya 004 offer a fresh way to perceive their own traditions,” says Fan.

This is the fourth edition of Senilab’s Cahaya series, which looks at how light can shape or redefine a physical space.

Don’t worry if you can’t make it to the show. From Dec 19-31, small scale models of the light sculptures from Cahaya 004 – Kitab Basah will be on display at Publika’s West Entrance Black Bridge. 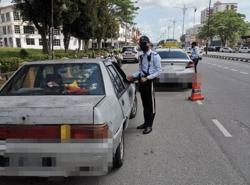