VIRTUAL EXHIBIT: ALL THE LANDS WITHIN THE SEAS

The Back Room KL art space is offering a hybrid exhibit All the Lands Within The Seas, which viewers can enjoy at the gallery or experience online if they are not in Kuala Lumpur. The exhibition, presented by Cloud Projects, is a journey through the waterways of Melaka and its relations: a visual history told through more than 80 works of maritime Melaka and beyond. TALK SERIES: THE SUBTLE BEAUTY OF JAPANESE LITERATURE AND THE WORLD OF NATSUME SOSEKI

Literature lovers can tune in to Japan Foundation KL’s Facebook Live session tomorrow to explore the subtle beauty of Japanese literature and glimpse into the world of one of the most widely acclaimed Japanese national writers in the Meiji era, Natsume Soseki. The session will be presented by Dr Leong Yut Moy, a Japanese literary researcher at University of Nottingham Malaysia.

Not only did the classics I Am A Cat and Botchan fascinate readers in the Meiji era, but they also continued to gain their popularity in modern days while serving a special purpose in Natsume’s quest of expression. The Living Arts Cultural Festival, which takes place online this weekend, highlights the uniqueness of world cultural heritage and the importance of conservation and preservation efforts.

This festival brings together the arts practiced by communities from all over the world that have been recognised by Unesco and gazetted as National Heritage in 15 countries such as Malaysia, Indonesia, Australia, Turkey and South Korea.

Living Arts Cultural Festival 2021 will be streaming for free via CloudTheatre. 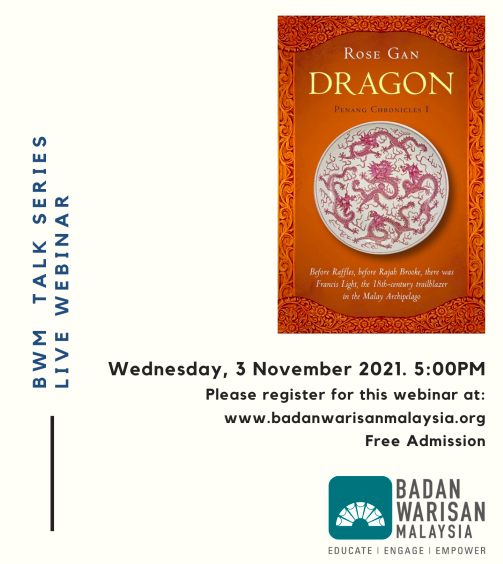 KL-based author Rose Gan, accompanied by her daughter, Zoe, as the moderator for this Badan Warisan Malaysia talk, will speak about her newly released book entitled Dragon. This book is the first volume in the Penang Chronicles, which tells the story of Captain Francis Light and his partner, as well as the backstory of the British settlement of Penang. This new series of historical fiction features real historical characters and events from 18th-century Malaysia, India, Indonesia, Thailand and Britain.

From humble origins in Suffolk, England, Light struggled against the social prejudices of his day. His subsequent adventures as a naval officer and country ship captain took him from India to Sumatra, the Straits of Malacca to Siam, through shipwreck, sea battles, pirate raids and tropical disease. But Light’s most difficult challenge was his ultimate dream: to establish a British port in the Indies on behalf of the East India Company.

A screen shot of 'The Chettis Of Melaka' virtual exhibition, presented by Muzium Negara. Photo: Handout

VIRTUAL EXHIBITION: THE CHETTIS OF MELAKA

The Chettis are regarded as the first and oldest Peranakan community in Malaysia, and viewers can now discover more about them through The Faces Of Malaysia Exhibition: The Chettis Of Melaka, which runs until Nov 16.

"The Chettis Of Melaka exhibition aims to highlight the uniqueness of the Chetti belief systems and language as well as expose the public to the sustainability of the Chettis as one of the ethnic minorities in Malaysia," reads a Muzium Negara statement.

The exhibition is divided into four main sections, each concentrating on different aspects of the Chetti heritage and culture. The Open Arts Classes (OAC), a free virtual learning series under Art In The City (AITC) 2021, is offering a rare chance to experience a “class session” with the movers and shakers in the arts and culture scene.

OAC will run over four weekends and streamed via Zoom. Each class in the series has a classroom size of 500 students.

On Oct 30, performing arts practitioner Adlin Aman Ramlie will give viewers the lowdown on the monologue life in theatre and screen productions.