Azmi's sketch titled 'Coach Teh', which celebrates the story of veteran badminton coach Teh Peng Huat, who is based in Bukit Mertajam, Seberang Perai, Penang. He coaches local youth players, and was the man responsible for unearthing badminton icon Lee Chong Wei's talents as a boy. Photos: I Am Home

From the meeting place of two rivers known as Dhoby Ghaut to weekly outdoor film screenings in the old Prai Estate, the rich history of the working class in Penang is diverse and unique.

Bursting with vibrant multiculturalism, many of the people who now call this northern state home originally came from different parts of the globe.

In a virtual exhibition aptly entitled I Am Home, Dr Kuah Li Feng and a pair of homegrown comic artists aim at documenting ageing narratives of homemaking from Penang communities.

“We always talk about being ‘multicultural’, especially in the context of George Town being a Unesco World Heritage Site, but what do we actually mean by that?

“In this project, I wanted to record and document people’s histories and how they came to settle down and grow their communities in Penang. What were the challenges and difficulties they faced and how are they still here?” asks Kuah in a recent interview.

The focus of the project, she goes on, is particularly centred on the post-World War II community who are advanced in age.

“During the British rule, we can actually source very good government documentation from before WWII.

However, after that, there are large gaps in our records. The only way to retrieve this history is to talk to the people who lived during that time.

“I particularly wanted to concentrate on the working class – those who can’t read or write or afford to take photos during that time. It’s a way to give a voice to those who are sometimes unheard,” explains Kuah, who is a cultural practitioner, researcher and graphic designer based in Penang.

Oral history and multiculturalism have always been Kuah’s passions but for this project, she also needed a method to capture elements where words fell short.

In the motion of a badminton racket, the laughter of children playing in a river or the grace of a Nyonya dancer, seeing is an essential part of experiencing.

For the visual element, Malaysian comics veteran Lefty Julian, who grew up in Air Itam, and cartoonist/artist Azmi Hussin, originally from Butterworth, stepped in to contribute works. 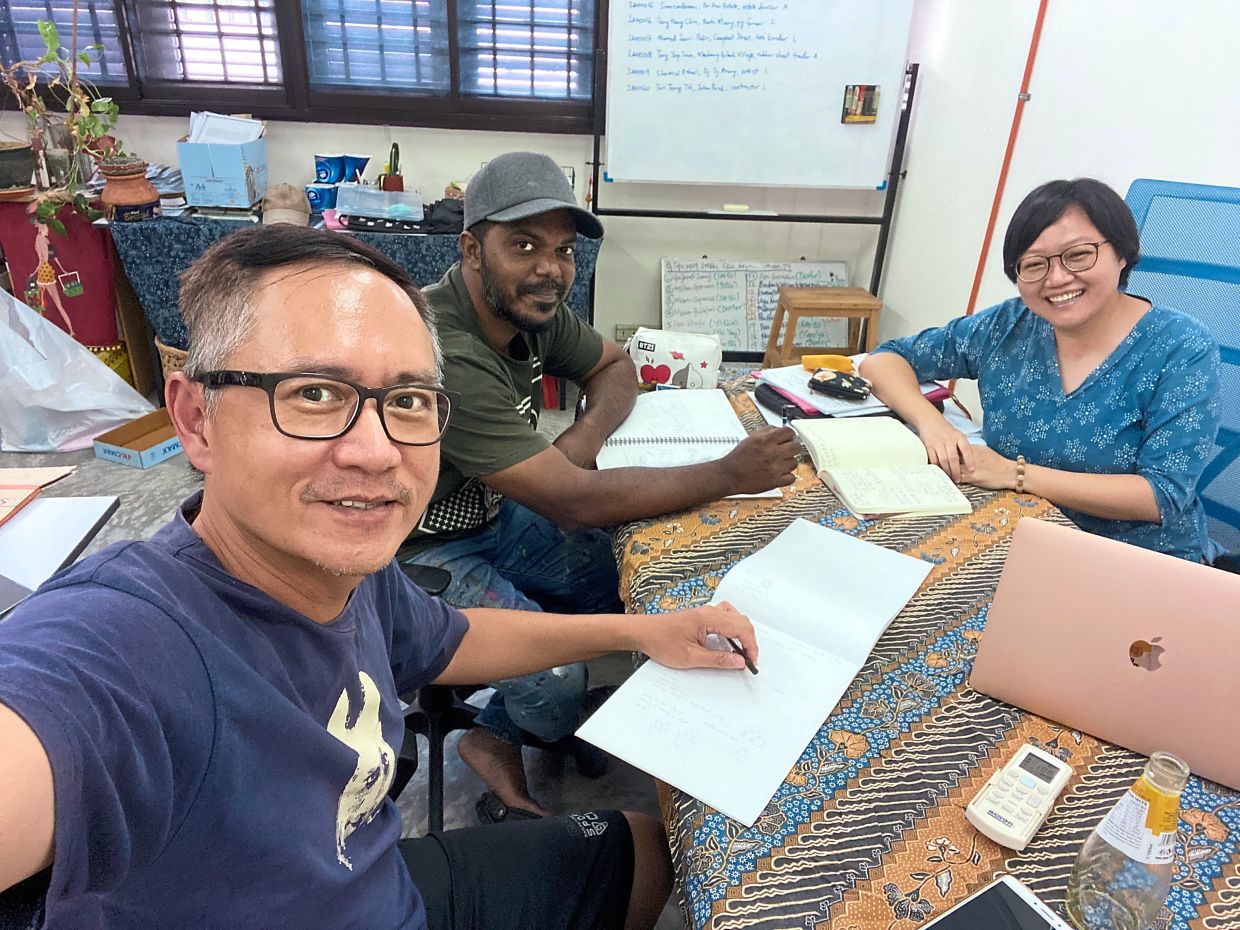 Eager documentarians (from left) Lefty, Azmi and Kuah are hoping to expand the 'I Am Home' project.

“Sometimes narration cannot fully represent the spirit and character of a person. This is where the drawings come in to capture the living element of the people we talked to,” says Kuah.

“This project is a multicultural journey so I wanted the team to be multicultural as well. All of us come from different religions and backgrounds.

“I’ve known Lefty for many years and Azmi, who I first met during this project, brought such a different perspective. Through our road trips across Penang and makan-makan (eating) sessions, the whole process became so meaningful for all of us,” she adds.

With a target of 20 interviewees, the method of collecting data was straightforward enough – the team would source Penangites from different cultures and geographical localities and then, pay a visit to a senior member from those communities.

Kuah would lead the interviews while Lefty and Azmi spun their magic in the background, sketching on the spot.

Azmi, who started as a live caricature artist in 2013 drawing for tourists outside Fort Cornwallis, was in his element though these drawing sessions had one stark difference.

“Some of the subjects this time didn’t realise I was sketching them. They thought I was just taking notes. So, when I showed them the drawings after the interview, they were surprised! It was really fun,” he says.

Azmi, who released his fourth cartoon book in the middle of this year, says I Am Home was different from any of his previous work because he was telling other people’s stories.

“With Tanjong Life and my other books, I was always telling my own stories. Here, I got to see things from other people’s points of view,” he says.

To make the project even more interesting, Azmi and Lefty divided up the work in a way that each covered a community that they were not personally a part of.

“It was a real learning process; to listen to their stories from their memories, then go back to do homework and research to make sure the detailing was right. “Some of the things we drew, we have never seen before. For example, the old type of Chinese funeral perarakan (procession).

“We had to know how the van looked, the things the people were carrying in their hands, the dress code... it was very different (in the 1970s) than now, where people just wear black and white and the ceremony is more simple,” elaborates Azmi, adding that Kuah did a lot of the heavy lifting in searching for old photos and resources to ensure that all the drawings in the exhibition were as accurate as possible.

It has been a rather productive year for Azmi in a rather quiet Penang art scene caused by the pandemic restrictions. He also released his new comic book Tanjong Life: The New Norm to coincide with the George Town Festival in July, and worked on mural projects, caricature pop-ups and face mask art.

Though Penang is the country’s second smallest state, it has become almost a standing joke that most Penangites only know their personal neighbourhoods, schools or workplaces and the surrounding areas well.

Those living outside Balik Pulau would likely be lost among the old country roads, old Jelutong is a never-ventured-to turn-off on the expressway to town and islanders almost relish in never crossing the bridge to the mainland.

For this reason, it is hardly surprising that the I Am Home project brought its team to places in the state that some of them had never been to before.

The field work was done mostly last August and September, with the pandemic situation back then giving the project team a short yet productive window to visit the communities.

“I’ve passed Dhoby Ghaut countless times but just never stopped to take a look. Places like Kampung Siam, too, are so hidden if you’re not familiar with the area and many of us seldom go to the former pig farming area in Batu Maung. 'Nyonya Dancer' by Lefty takes viewers back to the golden age of song, dance and culture in Penang.

“To draw the communities here, we purposely visited each of these areas and it was an experience that I loved,” says Lefty, who is also waiting patiently to see if his postponed Sama-Sama: George Town, A Multicultural Art Journey exhibition at the George Town Festival in July will be given a new date.

As a labour of love on a very modest budget, I Am Home is nevertheless important as a way to capture the disappearing cultures, backgrounds and lifestyles of Penang’s communities, he adds.

“Until quite recently, the community in Dhoby Ghaut (that literally means ‘washing area’ in Hindi) still used the river for their laundry businesses.

“It’s amazing how they used to separate the clothes, wash them and dry them under the sun. These old cultures are quickly disappearing and we need to record them so future generations at least have a resource they can refer to,” says Lefty.

From the hills of Paya Terubong to legendary Coach Teh’s old, no-frills badminton centre in Berapit and from the Wadda Gurdwara Sahib to the shores of Pantai Acheh, the I Am Home project gives just a glimpse of the beautiful cultural diversity Penang possesses. Lefty’s sketch 'Dhoby Ghaut' captures the story of a traditional Indian dhoby community which settled at York Close and the nearby areas along the river in George Town, Penang.

The initial project, funded by the Cultural Economy Development Agency (Cendana) and the Penang State Exco for Tourism & Creative Economy (PETACE), concluded with the production of an ongoing, online exhibition.

With additional funding from the newly-minted Penang Harmony Centre (Harmonico) and National Art Gallery, the artwork is set for a two-week on-site exhibition in Penang, tentatively scheduled for November.

“The final artworks will be on display and the sketches that were done on the spot during the interviews will be in the exhibition booklet. In the future, we would love to expand the project to include more stories.

“Twenty is a good number but we were honestly spoilt for choice as there are so many more communities and places that are part of Penang’s story.

“That’s what makes Penang – and Malaysia – special: everyone has space for their own culture,” concludes Kuah.

'I Am Home' exhibition Azmi's sketch titled 'Coach Teh', which celebrates the story of veteran badminton coach Teh Peng Huat, who is based in Bukit Mertajam, Seberang Perai, Penang. He coaches local youth players, and was the man responsible for unearthing badminton icon Lee Chong Wei's talents as a boy. Photos: I Am Home

Lefty’s sketch 'Dhoby Ghaut' captures the story of a traditional Indian dhoby community which settled at York Close and the nearby areas along the river in George Town, Penang.

Eager documentarians (from left) Lefty, Azmi and Kuah are hoping to expand the 'I Am Home' project.

'Nyonya Dancer' by Lefty takes viewers back to the golden age of song, dance and culture in Penang.

Azmi documents a scene from a Teochew community funeral in 'Penghulu'.

Azmi's artwork titled 'The Sikh Historian', which tells the story of Penang-based Malkiat Singh, who is known for promoting Sikh culture and tradition in Malaysia.

A sketch titled 'Pig Farmer' by Lefty, which shows the only living evidence - a slaughterhouse - of the once active pig farming community in Batu Maung, George Town.