Tunde Csuhaj, creator of artfully decorated Easter eggs, presents a goose egg at her workroom in the town of Szekszard, Hungary. Photo: AFP

With lace-like etchings and carvings made with a hand drill, the decorative egg art of Hungarian artist Tunde Csuhaj is bringing a different spin on an ancient handicraft popular at Easter.

As in neighbouring countries like Ukraine and Romania, Hungary boasts a long tradition of egg painting as part of Easter celebrations.

But although Csuhaj's works are in high demand around Easter, the 67-year-old works year-round at her home workshop in Szekszard, 150km (93 miles) south of Budapest, where she began decades ago.

"After 30 years we know each other very well, the egg and I," said Csuhaj.

"If I make a mistake and the egg breaks, well that is painful for both me and the egg," she added.

Originally painting eggs in the colourful "Sarkoz" style named after a nearby region, she soon developed her own style, etching and carving eggshells with a hand drill. Her material ranges from smaller pheasant and chicken eggs, to larger goose, emu and ostrich ones.

"Goose eggs are the most suitable, they have a large surface, a solid shell, and are white, which is important for colouring and drawing miniature details," she said.

After emptying an egg of its contents through tiny pinholes, Csuhaj cleans, washes, and dries it before drawing pattern guidelines on it with a pencil.

Then, using a small fountain pen-like stylus she delicately paints hot beeswax over the patterns, a method called "batik".

The shell is dipped in an acidic fluid that thins the parts not covered with wax. Then the wax is scrubbed off with a toothbrush under running hot water.

Finally she uses a drill to punch holes and shapes, creating a sculpted lace-like effect around either the entire shell or part of it to complement a painted motif. 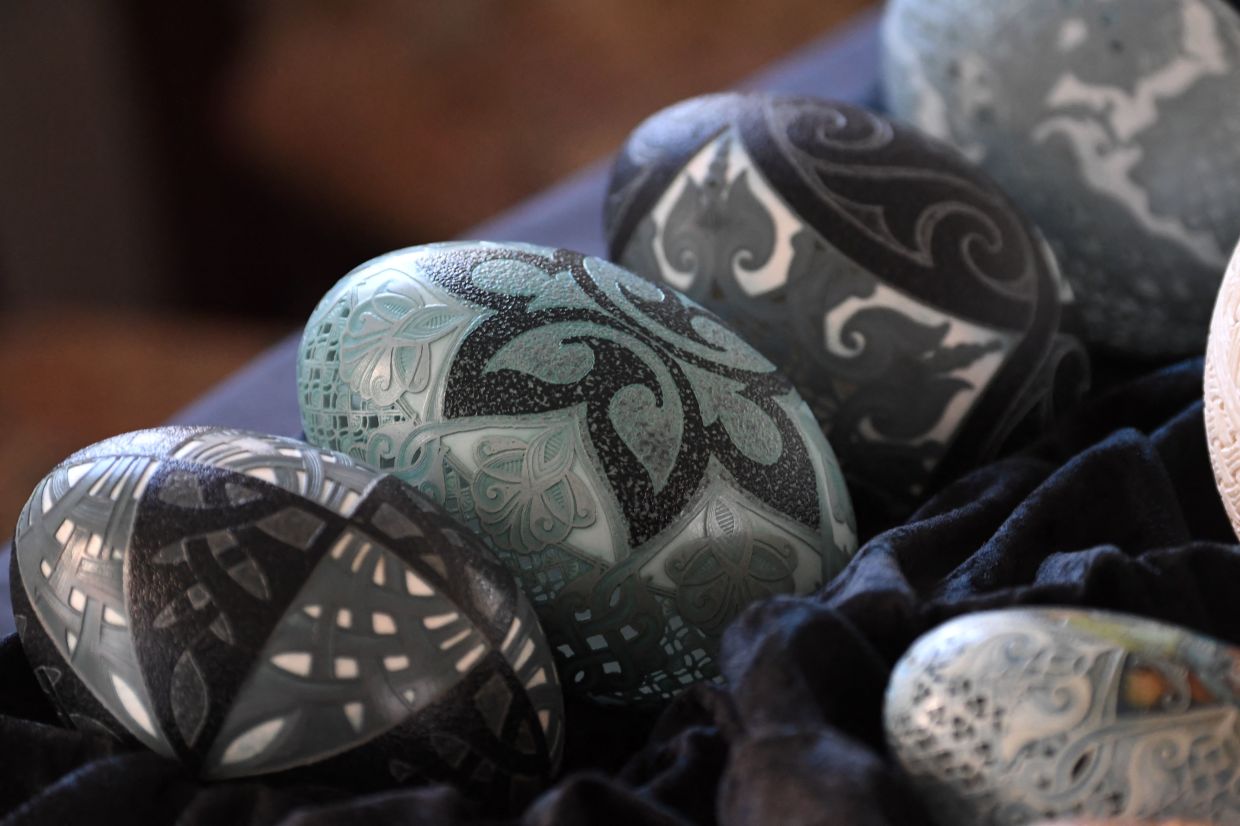 Through the years, Csuhaj developed her own style, etching and carving eggshells with a hand drill. Photo: AFP

Displayed around her workshop are finished eggs decorated with scenes from fairytales and legends, beasts and insects, religious symbols, and intricate geometric patterns.

"No egg is the same shape, and all my designs are different," said Csuhaj, whose favourite motifs are "those related to the resumption of nature in spring".

Unsurprisingly, the level of detail requires days of effort, and she can't turn out more than 100 eggs per year.

A regular attendee at exhibitions and fairs in Western Europe since the 1990s, Csuhaj says her unique style is popular among collectors.

"I don't sign the eggs as everyone knows they were done by me," she said.

Although unable to travel this year because of pandemic restrictions, bespoke client orders help to keep her busy.

"A fireman asked me recently to paint a fire engine on an egg, I do whatever is special for people," she said. - AFP