A woman walks in front of a digital painting by Chinese artist Liu Gang (back) at a crypto art exhibition in Beijing entitled 'Virtual Niche: Have You Ever Seen Memes In The Mirror?', one of the world's first physical museum shows of blockchain art. Photo: AFP

Bitcoin-inspired paintings and nightmarish faces conjured up by artificial intelligence, the global craze for "NFTs" - virtual authenticity certificates - swept into Beijing on Friday as curators opened one of the world's first exhibitions dedicated to blockchain art.

The show includes digital paintings by American artist Beeple, who sold a collage at Christie's for a record US$69.3mil (RM265mil) earlier this month.

A coin-shaped canvas by British-based Robert Alice, covered in painted fragments of Bitcoin's source code, hangs in a secluded room accompanied by a TV screen showing its digital twin.

A collection of old TV monitors play animated images including a rainbow-hued portrait by American teen artist FEWOCiOUS, while a GIF of an inflatable goose head by Chinese artist Yitian Sun gyrates on a nearby wall. Blockchain adds "a kind of abundance to art," said curator Sun Bohan. "It's a kind of new experiment and exploration."

What the works have in common is NFTs - or non-fungible tokens - which use the same blockchain technology behind cryptocurrencies to turn anything from internet memes to tweets into virtual collector's items that cannot be duplicated.

Though bewildering to many, a manic appetite for digital objects authenticated through blockchain technology has spread through different markets.

The most famous example is Twitter boss Jack Dorsey selling his first tweet, from 2006, which reads "just setting up my twttr," for US$2.9mil (RM12mil).

NFTs have recently taken the art world by storm as investors seize the opportunity to monetise digital art. 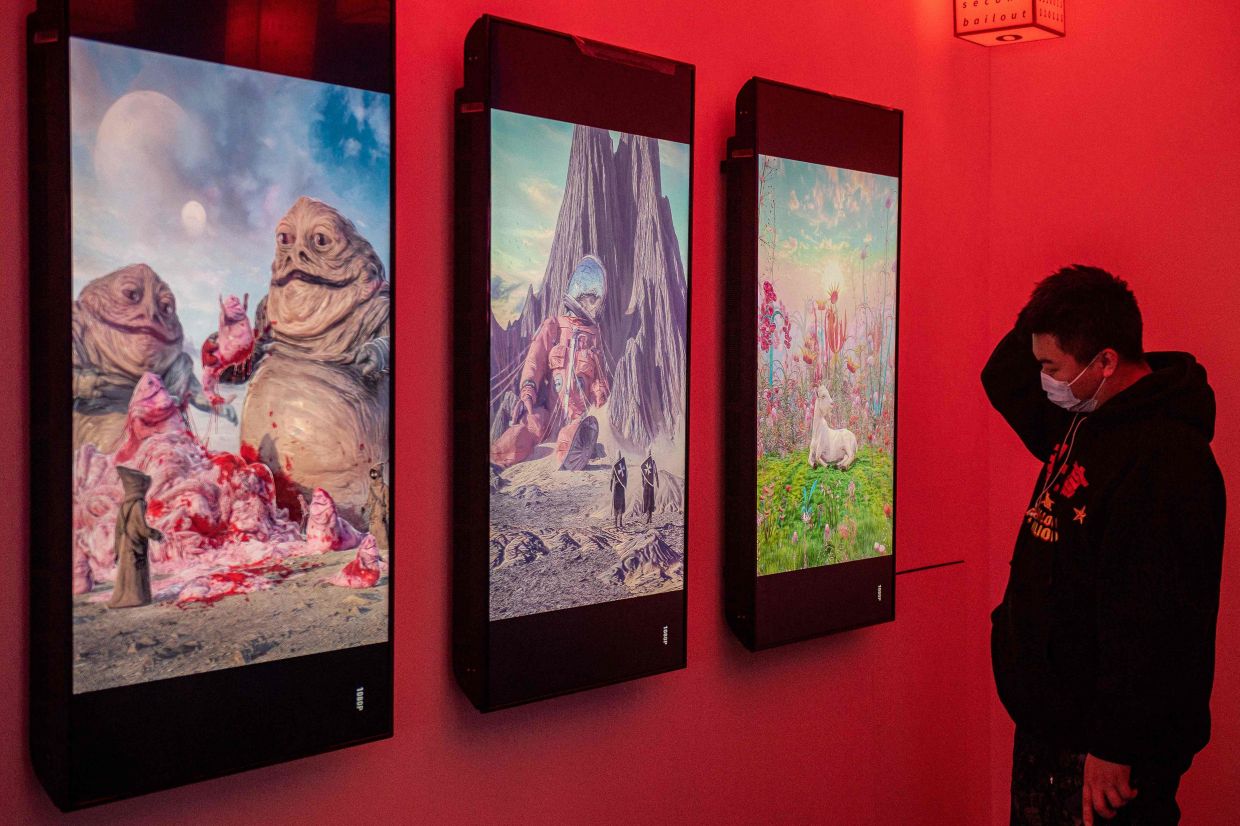 A man looks at digital paintings by US artist Beeple at a crypto art exhibition entitled 'Virtual Niche: Have You Ever Seen Memes in the Mirror?'. Photo: AFP

Wealthy collectors claim the bragging rights to ultimate ownership of an original virtual file even if the work can be endlessly copied.

The one-off digital copy is on display at the Beijing show, meaning every time an element - the dinner table or the diners at the supper - changes hands, its collector can also change a colour or texture that will appear real-time on the screen at the exhibition.

Sun said blockchain will improve the "ecosystem" of the art world, changing the "liquidity of artworks, and the diversity of relationships between collectors and creators." - AFP

How you can 'Save The Museum' from pests with a card game
British heritage charity flags Enid Blyton's alleged 'racism'
Outdoor dad to hipster pops: there’s a book for every sort of father out there
Malaysian storytellers add gritty KL tales to regional digital story festival
South-East Asian tarot deck project shares a diverse array of stories and myths
Everything in New York is bigger, even its Van Gogh exhibit
David Bowie painting from Canadian donation store up for auction
Need an inspiration or a distraction? This 'typewriter' can be both for fatigued writers
This inspiring book touches on disabilities, accessibility and inclusion
Language extinction threatens cultural and traditional medicinal heritage