In his short career, Nasir made his name in the Penang art circles and beyond, producing a variety of artworks highlighting his love for nature and wildlife. Photo: Filepic

Penang's art scene mourns Nasir Nadzir, a young, much-loved artist from Kepala Batas whose creations and generosity of spirit touched so many in the art world and beyond.

Nasir passed away on Jan 24 after suffering Covid-19 complications, his family says. He was 31.

With qualifications in aircraft maintenance, a specialised form of mechanical engineering, Nasir worked in the oil and gas industry before making an unexpected foray into the art scene about four years ago.

“I was at Kerteh, Terengganu, ranching pipeline. It was an incident that should not have happened but it happened anyway – it was a rushed job. We were working at 40ft high and I fell through a crack, four meters down to the second platform. Everything flashed through my mind, ” Nasir said in a Seni Seni video segment released by the Penang Art District early last month.

It was then that visual art took a strong root in his mind, shifting his career and life onto a path that many are not brave enough to choose.

“Afterwards (after the incident), I couldn't sleep for three days, four days... and that's when art naturally started to come by. It's quite weird. I started this art journey without having any art background at all, ” he said. Nasir's art, such as 'Tam In Remembrance', encouraged viewers to get passionate about wildlife conservation. Photo: Handout

In a juxtaposition to his former life, the Penang-based Nasir channelled his art skills on wildlife, producing stunning sketches, ink drawings and paintings of animals and nature.

Among his noted works are Tam In Remembrance, which pays tribute to the last male Sumatran rhinoceros, Bread Loaves And Slices Of Life – a depiction of a friendly mamak sundry shop in mainland Penang – and Keluarga Gajah (Elephant Family) which occupies a place in the Penang State Art Gallery’s permanent collection.

As unconventional as his introduction into the art world, Nasir excelled in less popular mediums of artliner, Chinese ink, ballpoint pens and coloured pencils.

Many of his artworks are so realistic that viewers double take to ascertain if they are art or photography.

“When I crossed over from having no art background into an art career, I took a literal path instead of having much of an abstract approach.

"I would put all the details in and try to be as realistic as possible, mainly to have the same touch as how I was touched by (veteran artist/cartoonist) Jaafar Taib's paintings way back when I was a kid, ” said Nasir. 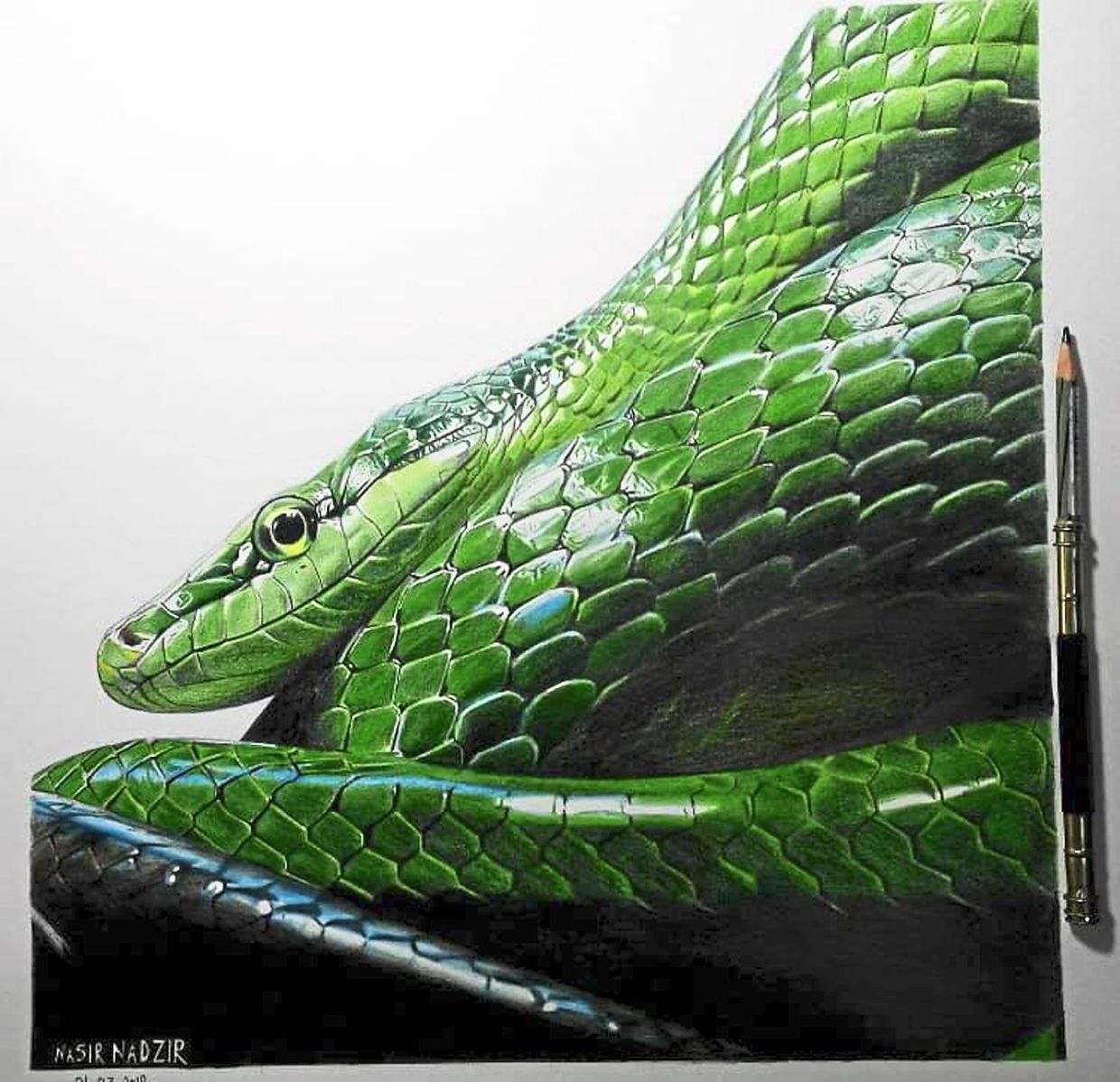 Nasir's acute attention to detail was a key highlight in his works. Photo: Handout

In 2016, his art was showcased in Penang: The Art For Nature exhibition in support of WWF-Malaysia – his first proper exhibition – and over the years, he exhibited in Open Studios Penang, BELANG that highlighted the plight of the critically endangered Malayan Tiger and 8’’ by 6’’ Project, among others.

Nasir was productive in lockdown conditions, creating a stunning twin-composition of precious blueberries for the Boxed In: One Foot At A Time exhibition and lending his hand to two charity drives in aid of trishaw peddlers hard-hit by current circumstances.

Nasir is survived by his parents and four siblings.

His elder brother Nizom Nadzir shares that just two days after his brother’s passing, a donation had been made to the Langur Project Penang by an art patron who was taken with one of Nasir’s works. “It gives me hope and encouragement to know that his art will continue to live on and touch the people and causes he cared so much about, ” says Nizom.

Yesterday night, over 35 artists, collectors, curators and members of the Penang art community gathered online to celebrate the life of the humble, curious young mind.

“As you get to know him, you begin to realise the intensity hidden behind this calm, smiley and unassuming exterior.

"Inside, he was incredibly curious about everything – from a sip of coffee to religion to art. It was as if he wanted to taste and feel life to its fullest extent, ” says jewellery maker and artist Tina Lee Degreef.

Lusy Koror from Little Art House Studios (LAH) – one of the first few artists Nasir met after beginning his art journey – says in the span of a few short years, the student had far surpassed the master.

“He really deserved an incredible journey and he had it, ” she says.

Singer M. Nasir’s father passed away at 96 in Singapore