How a Bahasa Malaysia arts journal is breaking barriers, attracting a crossover audience The team behind 'Svara' (from left) Nazir, Hafiz and Badrul. This quarterly independent publication in Bahasa Malaysia, which focuses on culture, is also gearing up for a translated ‘best of’ English anthology next year. Photo: The Star/Muhamad Shahril Rosli

It might have taken three years for the main founders of the Svara journal – indie bookshop owner/writer Nazir Harith Fadzilah, writer/editor Hafiz Hamzah and filmmaker Badrul Hisham Ismail – to get their dream literary project off the ground.

But it took them less than three months at the start of this year to quickly rethink the editorial plans for the quarterly Bahasa Malaysia arts publication, which saw its inaugural issue arrive in early February.

“I don’t think anybody could have scripted the year that Malaysia has had in 2020. We were filled with excitement to see the first issue of Svara (“voice” in Sanskrit) finally out on the racks... in fact, we had ‘working themes’ ready for the journal, but then the pandemic arrived and not to forget the sudden change of Malaysian government, ” offers Hafiz, 38, who also runs independent publishing outfit Obscura, in a recent interview at the Tintabudi bookshop in Kuala Lumpur.

“Things just flipped upside down. We knew we had to work fast to give Svara’s subsequent issues timely relevance.

“There was just a lot happening at the same time from March onwards... but we’re glad we have been flexible enough to carry through and put out two issues that reflected on the (political) goings-on in Malaysia and the pandemic situation respectively, ” he adds.

Svara, much to its credit, delivered on its promise of realising four issues in this difficult year. The editorial and behind-the-scenes rejigging might make for good documentary material, but there isn’t much time for such distractions now.

“We got the fourth issue out last month, and I have to say, it feels that this whole project is just warming up. We’re grateful for the support towards Svara, which has come from all quarters, not just the Bahasa Malaysia scene. We have to keep pushing forward with this momentum, ” say Badrul, 35. 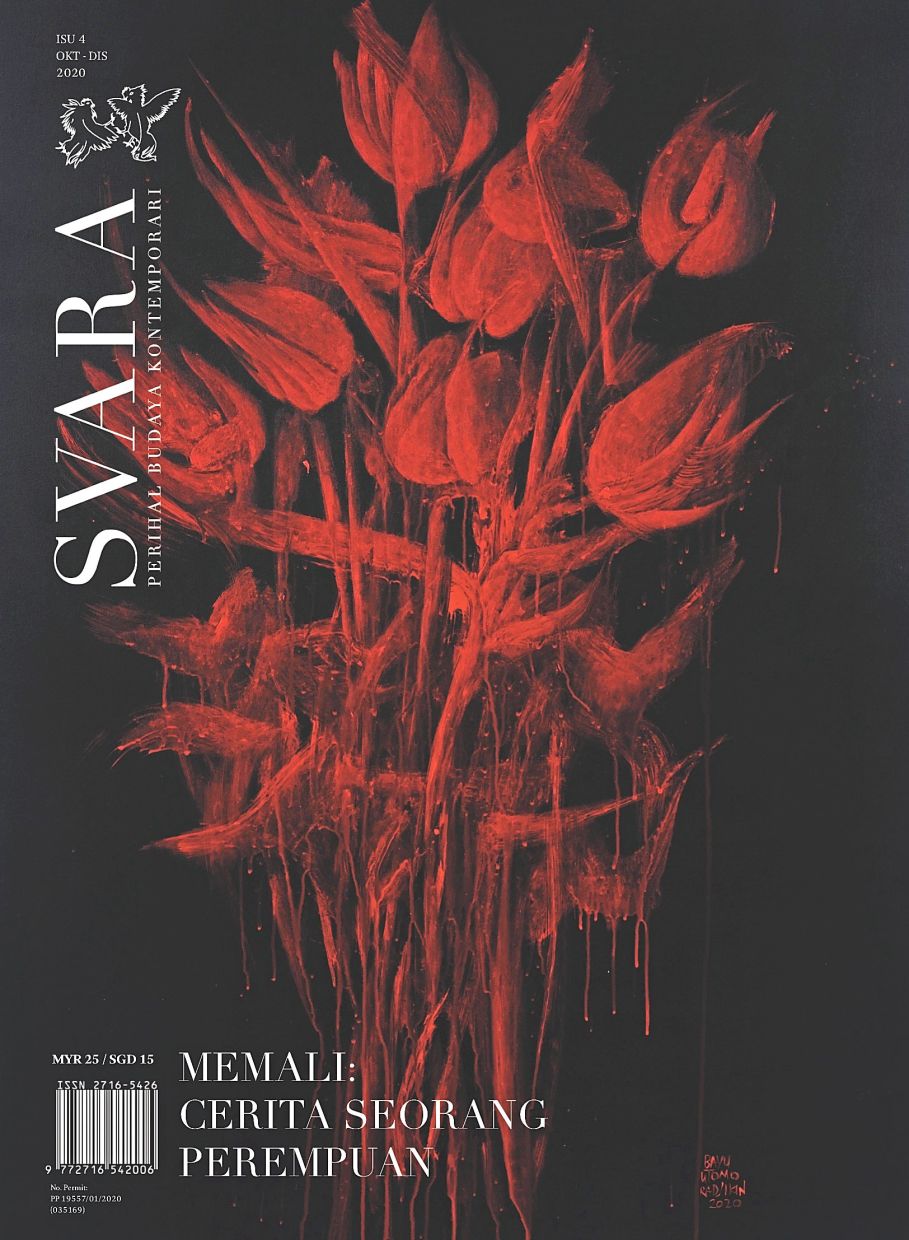 The design-savvy Svara, which is entirely independent, is published by the trio’s Pelita Tenggara Enterprise, and the main aim behind this project is to revive the idea of a pluralistic Malaysian arts journal and to give the print medium a boost.

In short, here’s a publication of cultural essays, reflections and reviews in the national language that is meant for everybody. Each issue includes thematic stories (spanning heritage to media) as well as the team’s passionate interest in poetry, film, photography and music writings.

From a Kelantanese-rooted comic strip and insightful articles on socialism to dangdut music in the East Coast and a heartfelt tribute to the late contemporary artist Ise, the content is all-embracing.

In the journal’s first issue, the editorial foreword read: “Svara started out with the modest intention of being a platform to gather engaging writings in Bahasa Malaysia.”

Nazir, 32, the owner of Tintabudi, strongly believes in the potential of printed matter and the need for new approaches when it comes to immersive Bahasa Malaysia storytelling.

“With Svara, we use the term ‘longform’ loosely, the word count is relatively substantial when we plan stories with our contributors. But it is not pure ‘longform’ in a rigid sense.

“The main criteria for us is to have every issue loaded with compelling, powerful and engaging material, ” explains Nazir.

“If Svara manages to attract a crossover readership and new appreciation for Bahasa Malaysia, then I think we are moving in the right direction, ” he adds.

Producing an intellectual-minded project like Svara in a time when readers have ever-shorter attention spans did come with its risks.

“It’s very difficult to give a clear definition of what works and what doesn’t when it comes to the print format. Firstly, we didn’t want to have a defeatist attitude that a physical journal was a non-starter in the age of digital content, ” says Hafiz. The first issue of 'Svara', which arrived in February, received nearly 700 pre-orders, proving there was a 'hidden' market for a niche Bahasa Malaysia journal. Photo: Svara

“Our hunch was that the Bahasa Malaysia scene is ready for a publication that offers a space for deeper reflection and thinking. The articles are not academic, yet they do fit a certain critical and intellectual standard, ” he emphasises.

To date, each issue of Svara has sold over 1,000 copies, with some issues on a reprint. It is stocked in a variety of locations nationwide, including an upmarket bookshop like Books Kinokuniya Malaysia to outpost indie bookstores in Pahang, Melaka and Perlis.

The trio behind Svara is convinced that there is a niche market for such a contemporary-minded journal, and it is a project worth exploring since all of them had the resources and creative connections in their respective fields to produce such a journal and market it.

From a marketing perspective, Nazir adds that this “niche demographic” is something which shouldn’t be ignored.

“The scale of this ‘niche’ is huge and it can expand exponentially, considering Svara is giving Bahasa Malaysia readers a publication that is rather different... and devoid of inane clutter, ” says Nazir.

“This project doesn’t have to be massively huge, it just has to be good... especially when we work towards stories put together with the right narrative arc and editorial authority, ” he adds, pointing out how early Dewan Masyarakat magazines (from the 1960s/70s) and the regional 1960s publication Tenggara have influenced Svara’s creative vision.

To him, the Svara mission is to carve its own path in the local literary scene, and to open up opportunities for diverse collaborations.

“This shouldn’t be an idealistic notion. We really want to remove as many barriers and obstacles in how Bahasa Malaysia stories should be told... and who should read them, ” says Badrul.

Contemporary artist Ahmad Fuad Osman, who provided the cover art – Tanda (Tanya) – for the third issue of the pandemic-themed Svara in July agrees that the boundary-breaking approach is the best way forward.

“I have to admit that I can’t remember the last time I was excited over a Bahasa Malaysia journal, which is so fiercely independent. What is important is that Svara cuts across all that usual ‘Bahasa Malaysia’ literary baggage.

In the coming year, Hafiz reveals that a hardcover anthology of Svara, which will be translated into English, is on the cards.

“It was important to decide the scale of the project from the start and not get too carried away with the possibilities.

“We are very much a Bahasa Malaysia concern, but there have been requests from readers to release a ‘best of’ Svara in English to attract a broader audience, ” says Hafiz.

“It is something we can do, and in the big scheme of things, an English translation of these articles serves to underline the value of local content beyond language barriers. In contemporary Malaysia, the notion of a shared platform to express without fear is most vital, ” he concludes.