Reimena Yee's latest book is a tender look at that bittersweet pivotal period when one has to leave childhood behind and embrace the new adventure of growing up. Photos: Reimena Yee

With Halloween just around the corner, it is the season for scary stories about ghosts. But Malaysian comics creator Reimena Yee’s latest work, Seance Tea Party, is a different sort of ghost story.

The new graphic novel for middle-grade readers is about Lora, a tween who isn’t too keen on being a teen. All she wants to do is continue her childhood adventures, have fun, play, and use her imagination. Unfortunately, none of her peers are interested to do so anymore, and as they obsess over how they look and what others think of them, Lora feels more alone than ever.

So, what’s a girl to do? Why, make friends with a ghost, that’s what!

A “tea party with a twist” ends up with Lora meeting Alexa, the ghost who haunts her house, and also Lora’s old imaginary friend. As they rediscover their friendship, both Lora and Alexa learn valuable lessons about growing up, friendship, and the importance of letting go. 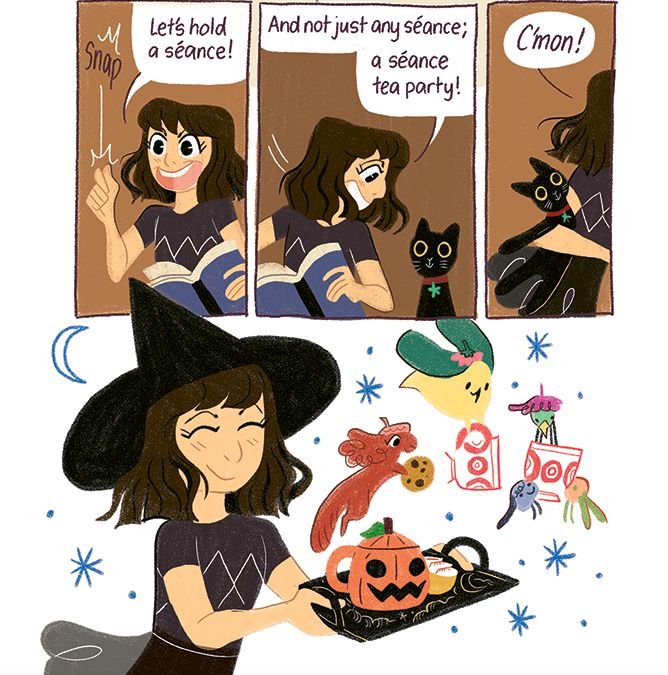 Yee admits that the story is semi-autobiographical in some ways.

Seance Tea Party is a far cry from Yee’s previous, best-known work – Eisner Award-nominated webcomic The Carpet Merchant of Konstantiniyya, which has since been released in graphic novel format as well. Being more of a children’s book, the illustrations are more whimsical, and the story itself is a sweet little ode to the wonders of childhood and a tender look at that bittersweet pivotal period when one has to leave the fun adventures of childhood behind and embrace the new challenges of growing up.

In an email interview from Melbourne, Australia, where Yee is currently based, she admits that the story is semi-autobiographical in some ways. 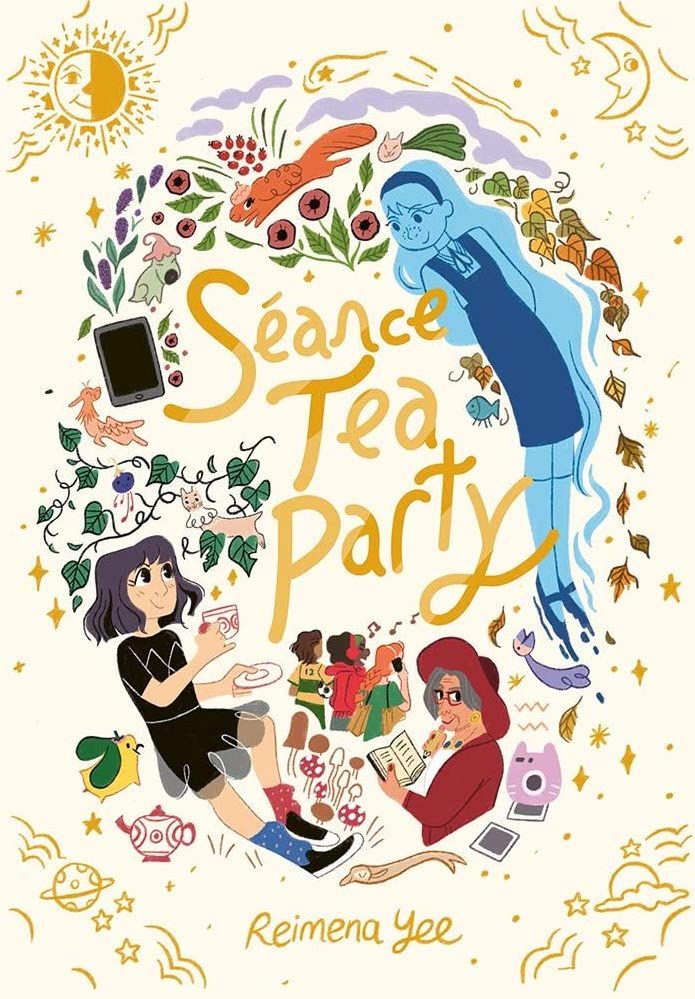 The inspiration for the book came from an old illustration Yee made for fun in 2016.“I made this book because, like Lora at her age, I had fears around growing up. Will I still love my cartoons and storybooks? What will happen to me when I become a grown up? And most chillingly, will I lose all of the parts of me that made me happy?” she explains.

“The story addresses those questions, but more than that, it shows that there is beauty and joy in growing older; that loss and growth are a natural part of life; and that children and adults share the same hopes and fears.”

The inspiration for the book came from an old illustration Yee made for fun in 2016.

“The sketch was of a girl having a seance tea party with a ghost, but the story didn’t emerge until two years later when I had to come up with a children’s book pitch for my publisher, Random House Graphic, ” she says.

“I just gave my publisher a document with the illustration, the logline, characters, and story outline. To my grand amazement it was accepted immediately.”

Compared to Carpet Merchant and her next project, a story about Alexander The Great, Seance Tea Party was a lot easier for her in terms of not having to do too much research. However, this time, it was the artwork that was more challenging.

“Drawing Seance Tea Party was somewhat harder on my hands. The style required more manual colouring than what I am used to, which is hilarious considering Carpet Merchant was painstakingly detailed... you’d think Seance would be easier. But no!” she says.

A little bit of Malaysia

One aspect of the story that stands out, particularly to Malaysians, is the addition of some distinctly local elements into the story, ranging from some very Malaysian-ised dialogue, to various other references to Malaysian culture.

According to Yee, the story is supposed to be set in a “pseudo-American suburbia” and Lora’s parents are first generation Malaysian immigrants.

“It was definitely a conscious decision to include those little bits of Malaysian-isms into a book for a larger, more international audience. Plus it’s a shoutout for those who know. Maybe one day I’ll do a whole book set in Malaysia, ” Yee says. 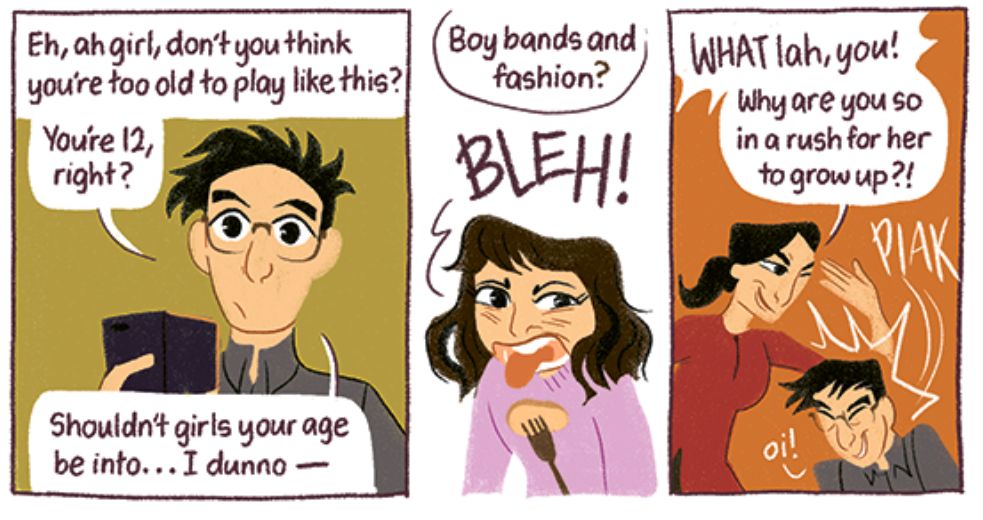 Speaking of which, Malaysian comics and webcomics have been growing in prominence of late. Following Yee’s own Eisner nomination in 2018, Erica Eng’s Fried Rice won the Eisner Award for Best Digital Comic in this year’s Eisner. Other webcomics like Fishball’s My Giant Geek Boyfriend and Ernest Ng’s Bro, Don’t Like That La, Bro have also been garnering more attention of late.

With that in mind, I asked Yee, who is also the co-founder of a South-East Asian comic artists’ collective called Unnamed, what she thinks is the next step for the local industry?

“There are two simultaneous things that should happen. First, local creators should totally take advantage of Western publishing’s demand for diverse creatives. They want your Malaysian stories and perspectives, ” she shares.

“Understand how to pitch, get an agent, build a portfolio or social media presence, improve your drawing and writing. Webcomics are a great step to learning how to do all those things, while still doing the work you love.”

Secondly, Yee reckons that local publishers should keep up with the current market and produce books with international appeal in mind.

“We need to nurture creative talent by paying them for their labour and trusting the craft. There is definitely room for a publisher who innovates and publishes the lesser-known stories with high production values, ” Yee concludes.

Seance Tea Party is currently available at Kinokuniya in Kuala Lumpur, and can be ordered from Gerakbudaya Penang or Lit Books in Petaling Jaya, Selangor.

Farewell to a true superhero of the Malaysian comic book scene

Malaysian comic series 'Nafiri', is an action-fantasy with a local flavour