Refugee theatre show 'And Then Came Spring' has been cancelled again in light of the conditional movement control order restrictions making travel and stage rehearsals prohibitive in the Klang Valley. Photo: Handout

Theatre play And Then Came Spring by a KL-based refugee arts group has been postponed yet again due to the conditional movement control order (MCO).

The Parastoo Theatre play, written and directed by Kabul-born director, writer and refugee Saleh Sepas, in collaboration with Instant Cafe Theatre (ICT), was slated for an early November run at the Damansara Performing Arts Centre.

“With movement restrictions in place, rehearsals at this crucial time can’t go ahead as planned and not everyone has access to high-speed Internet or digital solutions,” says ICT’s co-founder Jo Kukathas, who’s also the show’s artistic director and producer.

Featuring a cast of refugees from Afghanistan, Pakistan, Syria and Iran, And Then Came Spring tackles topics such as child marriage, drug abuse and refugee issues.

And Then Came Spring centres on the life of a child bride in Kabul who is abandoned by her husband after she has their baby. She then leaves her younger sister behind and escapes from her homeland to a new country to start a new life.

“Cultural and artistic activities are the most important task that we have to do in Parastoo. Through these activities we have expressed ourselves and the issues of refugees to the host community in Malaysia," says Saleh. 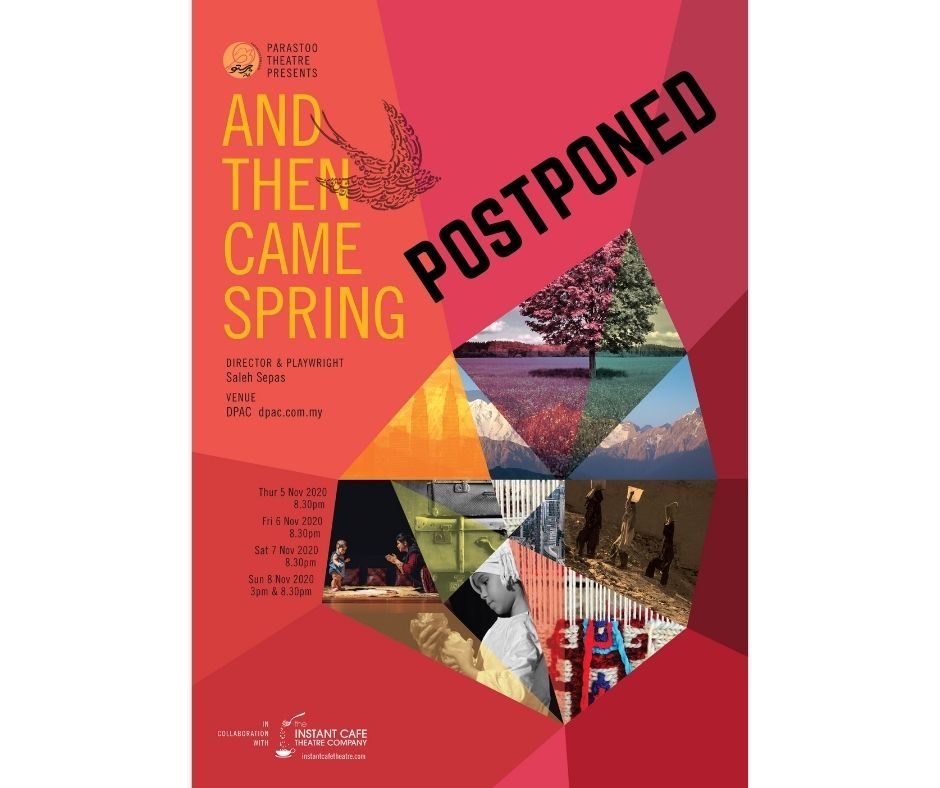 “Unfortunately everything was affected by Covid-19 pandemic. We have also suffered financially. This has brought anxiety and stress. We, refugees specifically, are in a situation that it's become very difficult for us to work,” he adds.

Parastoo is a refugee community funded theatre team based in Kuala Lumpur that follows the methods of the "Theatre of Oppressed" to tackle social issues.

Its And Then Came Spring play was originally planned for an early April run, but it had to be postponed after the MCO was enforced in March.

Kukathas says the “quickness” of the conditional MCO took everyone by surprise this time around. She shares that the team didn’t have the tools, funds or collaborators fully in place to successfully pivot this production into a digital format in time.

Kukathas recalls the sentiment expressed by many at a recent forum by MyCreative Ventures in collaboration with the Cultural Economy Development Agency’s (Cendana).

“Many speakers talked of the need to ‘pivot’ and pivoting is what we’ve been trying to do all year, successfully we think with Zoom Parah, ” she says.

“But the problem with being in a constant state of pivoting is that one can easily get thrown off balance by forces not in your control, ” she warns.

“We are trying to put such operations in place and make digital theatre part and parcel of our everyday theatre-making,” says Kukathas.

ICT is working on a new date to stage the And Then Came Spring show.

“If you are interested in supporting us in our digital journey whether through partnering, skills, knowledge or funding let us know.

“This crisis will be with us for a while but we want to find ways to keep making and sharing theatre,” says Kukathas.