Dance must go on in these post-pandemic times. Kwang Tung Dance Company from Kuala Lumpur has rolled out a virtual series called Merentas Awan to keep performances going while coming to terms with the digital future.

Merentas Awan is presented by the company’s youth group The Sel & KL Kwang Tung Association Youth Section. It streams (for free) every second and fourth Monday of the month until December via Kwang Tung Dance Company’s social media channels (Facebook, Instagram and YouTube).

“Merentas Awan invites artists from various industries, including dancers, musicians, writers, photographers and videographers to collaborate, with the aim to create works that mark the changing era of note-taking to cloud sharing,” says Amy Len, 45, the company’s artistic director.

“This collaboration encourages the artists to reflect on the current issues and interact with each others’ ideas and concepts, ” she adds.

This project involves 12 dancers from Kwang Tung Dance Company and 11 artists from various disciplines, who will be working on six themes, including isolation, love, fear, freedom, creativity and 2020. One theme will be explored every month.

Taking a two-pronged approach, Merentas Awan will feature two dancers each month, one for the videography series and the other for the photography series. To date, videos featuring Chan Wan Xin (July 13) in the photography series and Foong Siew Ching (July 27) in the videography series have been released, exploring the theme of isolation.

On Aug 10, it released Love (photography version) from Dev Lee.

Len, a full time dance teacher, says the idea for Merentas Awan came to her in May when the country's performing arts scene was in lockdown.

Looking at the dire state of affairs of the performing arts, Len knew something needed to be done. She reached out to artists who she had worked with before.

“It was an immediate ‘ball-rolling’ of discussions. Once all had been confirmed, somewhere in mid-May, these artists started working on the themes that they were interested in. Everybody brought ideas to their designated groups, ” shares Len.

Each group took two months to propose ideas, discuss, experiment and put everything together via Zoom. Working together with the dancers, directors, photographers and musicians are writers Mato Tytee (playwright) and Chong Keat Aun.

“The writers add texts as a form of inspiration. The dancers may change their choreography after reading the text by the writers, or even after listening to the music.

“The photographers and videographers will also propose their shooting ideas, providing images or keywords as pointers, ” explains Len. 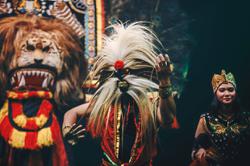