An illuminated manhole cover with designs of popular animation character from 'The Melancholy Of Haruhi Suzumiya', on the street in Tokorozawa, near Tokyo. Photo: Reuters

A set of manhole covers in Japan's Tokorozawa city, north of Tokyo, has been decorated with anime characters that glow in the dark, to the delight of locals and city officials.

The city installed the covers, which include designs from animation series such as Neon Genesis Evangelion and Gundam, this month to advertise a new entertainment complex focusing on Japanese popular culture that is scheduled to open in November.

After conquering the streets, protest art is now aiming for the digital realm

Banksy mural stolen at Bataclan returned to France from Italy 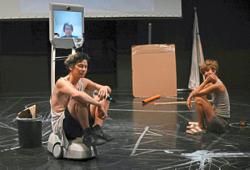