It won’t be until another month before Ilham Gallery in Kuala Lumpur starts welcoming visitors again.

Later this month, Ilham is going to be on Google Arts and Culture, an online platform through which the public can view high-resolution images and videos of artworks and cultural artefacts from partner cultural organisations throughout the world.

That doesn’t mean that the gallery has been inactive in the last three months.

The Ilham@Home series on its Facebook/Instagram and Youtube channel has seen a diverse range of artists taking over the gallery’s social media. The steady increase in Ilham's digital content has been one of the positives from the lockdown.

From Kamal Sabran’s experimental music/soundscapes and Yim Yen Sum’s fabric-based artworks to Pangrok Sulap’s woodcut activism and Haslin Ismail’s pencil-based lockdown series, there has been no shortage of interesting content.

If you ever wanted to learn more about Malaysian contemporary art, the Ilham@Home online updates will give you a glimpse of some of the best artistic names in the scene.

Another thing you can do from the comfort of your home is to revisit past Ilham programmes that have been documented for posterity on its YouTube channel.

Ilham has consistently been putting together thought-provoking art exhibitions throughout the years, with each show complemented by a series of programmes.

“With every exhibition, I conceptualise a whole series of programmes because education is an important part of what we do and our programmes are a way for us to engage with our audiences. The exhibition is necessarily limited by space so public programming is where I can take some of the larger ideas behind the exhibition and extend that conversation," says Rahel Joseph, Ilham Gallery director.

Not surprising then, that the programmes are designed for a diverse audience, from young kids to adults. It is also cross-cultural and includes talks, music showcases, film screenings and forums.

“This is a way for us to expand and diversify the breadth and appeal of our programming, and to also build new audiences. I would like to think there is something for everyone and that over the five years, we have built a community, ” adds Rahel.

Here we look at five interesting talks held at Ilham over the years. The gallery will be celebrating its fifth anniversary later this year.

Taiwanese artist Tehching Hsieh has certainly turned heads with some of the most extreme performance art ever made. In one piece, he jumped off the second floor of a building, shattering both ankles.

The next year, in 1974, he arrived in the United States and made his way to New York with the intention of breaking into the art scene. He was an illegal immigrant there for 14 years until he was granted amnesty in 1988. Recent exhibitions include Doing Time, which was presented by the Taiwan Pavilion at the 57th Venice Art Biennale in 2017, and One Year Performance, which was exhibited at Tate Modern, London in 2017-18. This talk is moderated by Lee Weng Choy. Watch it here.

Deeper Than Indigo by Jenny Balfour-Paul

In this talk, writer and artist/curator Jenny Balfour-Paul, a consultant for all things indigo – a species of plant that was one of the original sources of indigo dye – recounts the journey of Thomas Machell, an indigo planter and explorer in the 19th century.

While working on her book, Deeper Than Indigo (2015), she retraces his footsteps into China, remote Polynesian islands and former indigo and coffee plantations in India and Bangladesh. Here, she shares some of the insights gleaned during her travels and her take on the revival of natural dyes. Watch it here.

The Weight Of Our Sky by Hanna Alkaf

Malaysian author Hanna Alkaf talks about her experience researching and writing The Weight Of Our Sky, her debut YA novel. The book is set during the country’s historic race riots in 1969, where racial tensions led to a bloody riot. We follow the drama and adventure through teenager Melati, who has OCD and believes that she harbours a djinn inside her. The talk is moderated by Sharon Nelson and Kat Mirzan. Watch it here.

In conversation with Eddin Khoo, founder-director of cultural organisation Pusaka, the late Emeritus Prof Tan Sri Dr Khoo Kay Kim shares his thoughts on the early history of Kuala Lumpur and its evolution through the years. Prof Khoo, one of the authors for the Rukun Negara, was most noted for his seminal work, The Western Malay States. This talk at Ilham was held on April 13 last year. Prof Khoo died at the age of 82 on May 28 last year. Watch it here.

Political activist and graphic designer/street artist Fahmi Reza shows rare photos, newspaper reports, video footage, and archival materials and interviews in this multimedia lecture. This is a glimpse into his ongoing research into the golden age of the Malaysian student movement of the 1960s, before the Universities and University Colleges Act 1971 came into place. Student autonomy, student government and solidarity marches? All these topical issues and more in this talk. Watch it here. How photography shaped Malaysia's visual narrative over the years 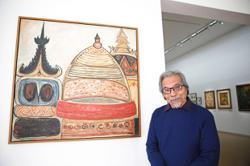