Every spare surface of Lin Hsin-lai's four-storey shop is crammed with a pantheon of Taiwan's celestial beings, testament to the decades he has spent sheltering and restoring unwanted statues of gods. To venture inside is a tour of the heavens.

Thousands of statues fill the shelves, from popular deities such as the sea goddess Mazu and the fearsome Guan Yu - a red-faced warrior god worshipped by police and gangsters alike - to lesser known beings like a tiger shaped guardian spirit.

"It's a pity that statues of gods are discarded and some are even battered by wind and rain," Lin said, shortly before conducting a blessing ritual for some repaired statues.

"They should be treated as cultural assets," he added.

Statues are ubiquitous across Taiwan, found in temples and homes to parks and offices.

Buddhism and Taoism, the island's two dominant religions, venerate a host of gods and incarnations - bolstered by a slew of colourful folk deities.

Yet many are thrown away.

So over the last four decades, Lin, 61, has embarked on a one-man mission to adopt any god statue that may need a new home.

The trained sculptor estimates he has saved some 20,000 statues over the years.

The worst spate of abandonment came some 30 years ago when vandalised statues were routinely dumped by gamblers seeking divine blessings as they tried to win underground lotteries.

"Nine out of 10 gamblers were doomed to lose," he recalled. "But they blamed the gods and vented their anger by discarding or even mutilating the statues. I rescued some with heads or arms cut off."

These days fewer statues are dumped outdoors. But Lin still gets a stream of calls from owners wanting a god removed or rehoused. Taoist god statues after they were discarded by people not using them anymore, at the workplace of sculptor Lin Hsin-lai in Taoyuan, northern Taiwan. Photo: AFP

Younger Taiwanese who are not religious or have adopted different faiths often don't want the statues passed down by the parents, while business owners and temples who go bust are another common source, he explained.

The largest case he handled involved some 700 statues from the family of a collector who passed away.

"I hope to find new homes for the statues so the deities can be worshipped and people can form connections with them," said Lin, who charges a fee to conduct blessing rituals for rehoused statues.

He fondly remembered convincing the finder of the first unwanted statue he repaired - a figurine of the warrior deity San Tai Zi left by a river - to take it home to worship.

Another favourite was fixing a badly damaged statue of the friendly-looking earth god Tu Di Gong for an elderly man who snared it while fishing at sea.

The man later took the restored statue home to the family altar.

"More people want to get rid the statues than receive them. I get phone calls almost every day about unwanted statues," he lamented.

As the calls keep coming, Lin is struggling to find enough space to accommodate the growing collection. 'I hope to find new homes for the statues so the deities can be worshipped and people can form connections with them,' says Lin. Photo: AFP

The statues currently fill up his shop, studio and a warehouse in northern Taoyuan county.

He opens his shop for school trips and has previously loaned statues to film companies wanting to recreate temple scenes.

This year he plans to open a gallery displaying some 1,000 statues of the goddess of mercy Guan Yin in her namesake town in Taoyuan where he lives.

There are few artisans left like Lin with the knowledge to carve and restore statues of gods.

He started out aged 17 with twenty other apprentices but only he and one other from the class remain in the trade.

Demand is waning and those who want statues often buy cheaper imported ones.

"This is a sunset industry," he sighed. "None of my three sons are interested in following my footsteps. I have to do it for as long as I can."

But he vows to carry on collecting the unwanted statues.

"I am doing this all by myself with my limited physical strength," he said, a reference to polio he contracted as a child.

"But I just can't bear to see the statues of deities abandoned." - AFP 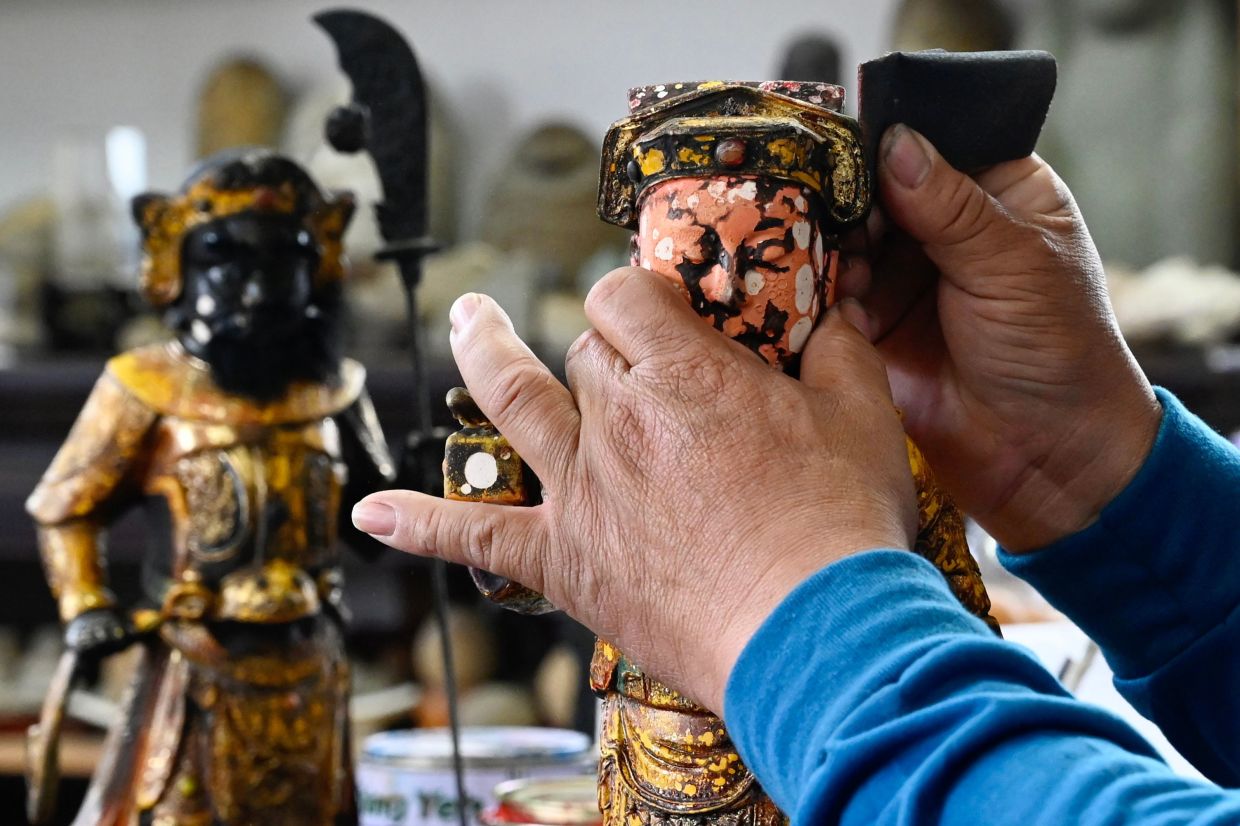 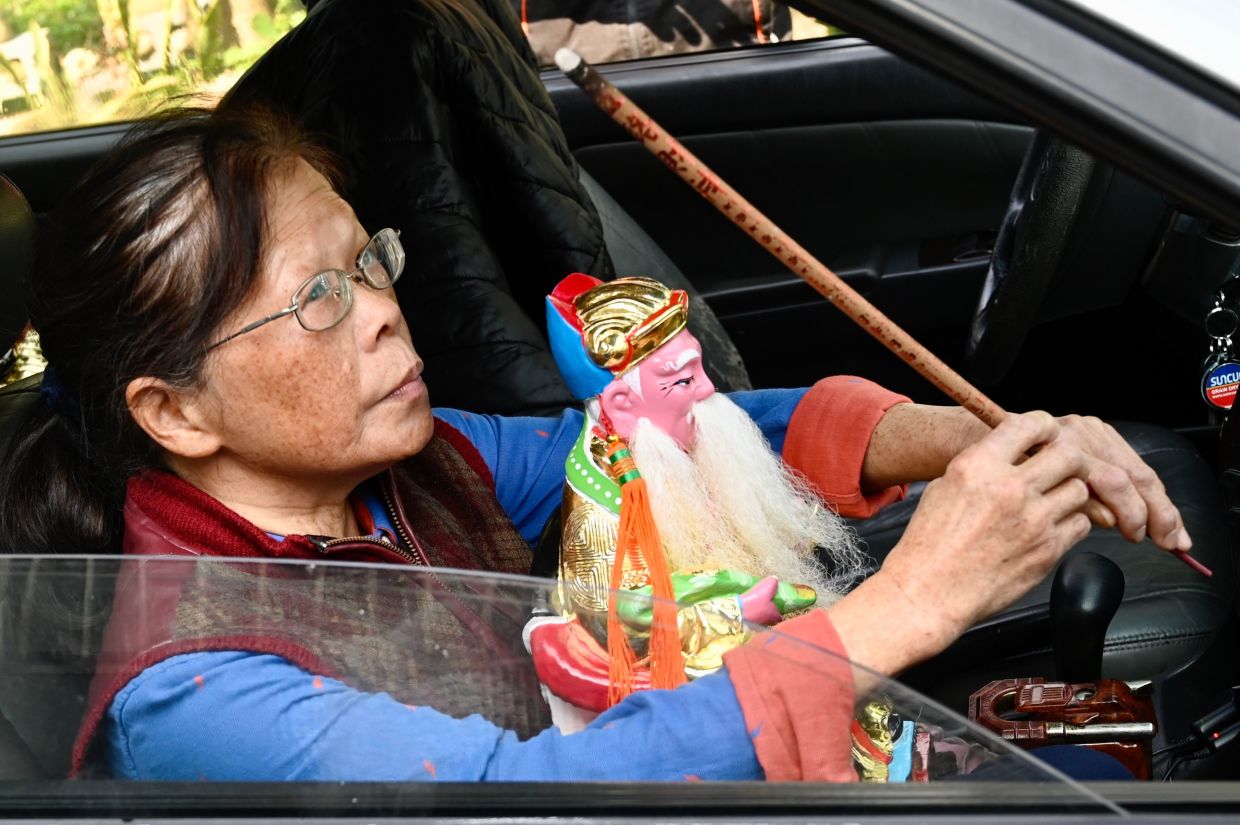 Lin Hsin-lai paints a Taoist god statue during a ceremony at his workplace. Photo: AFP

Every spare surface of Lin Hsin-lai's four-storey shop is crammed with a pantheon of Taiwan's celestial beings, testament to the decades he has spent sheltering and restoring unwanted statues of gods. Photo: AFP

Taoist god statues after they were discarded by people not using them anymore, at the workplace of sculptor Lin Hsin-lai in Taoyuan, northern Taiwan. Photo: AFP

A woman takes her new Taoist god statue home after it was restored by sculptor Lin Hsin-lai at his workplace in Taoyuan, northern Taiwan. Photo: AFP

'I hope to find new homes for the statues so the deities can be worshipped and people can form connections with them, ' says Lin, who charges a fee to conduct blessing rituals for rehoused statues. Photo: AFP