The Pangrok Sulap collective members have been working from home individually during the movement control order, and sharing their woodcut works online. Photo: Pangrok Sulap

The Pangrok Sulap members are not going to let anything stand in their way of making art. If they can’t do it together, then they can very well do it individually.

The activist art collective from Sabah, originally based in Ranau (a two-hour drive from Kota Kinabalu), currently stands at eight artists who have made a name for themselves for their stunning woodcut works as well as their community-centric events including workshops, school art support and charity work.

Art is what binds them together, but this multi-talented group also has folk musicians and social activists who are dedicated to empowering rural communities through their work.

But with the movement control order (MCO) ongoing, they are working separately from their respective homes and sharing their art through social media.

“Artists can play a role in helping to keep spirits up during difficult times. With the situation now, many people are worried and being cooped up at home is not helping matters, even if it is something you must do. We feel compelled to contribute in our own little way, through art, ” says Rizo Leong, 36, who is one of the founders of Pangrok Sulap. The group, which has been known for its political, environmental and anti-corruption themes laid out on woodcuts and banners, has always had the local community and the hardship they face in life, at the core of its practice. Despite the Sabahan themes and lingo, Pangrok Sulap’s art reflects on familiar issues that Malaysians can relate to. Some of the new works it has shared on social media are geared towards public awareness, while others are hopeful and radiate positivity.

The group has exhibited at major art events worldwide, including “Sunshower: Contemporary Art from South-East Asia 1980s To Now” in Tokyo in 2017, the “9th Asia Pacific Triennial of Contemporary Art” in Brisbane, Australia in 2018 and the “Aichi Triennale” in Japan in 2019. Not to forget eye-catching shows from Taiwan to Paris.

This Covid-19 situation might be new, but Pangrok Sulap is not afraid to talk about the harsh reality of everyday life even as the battle rages on.

Outside of his contributions to the collective, Leong, for instance, has been coming up with a steady stream of thought-provoking sketches that capture the struggles of the community and how the current Covid-19 situation has affected them.

In one, three children gaze longingly out the window at birds flying in the sky. 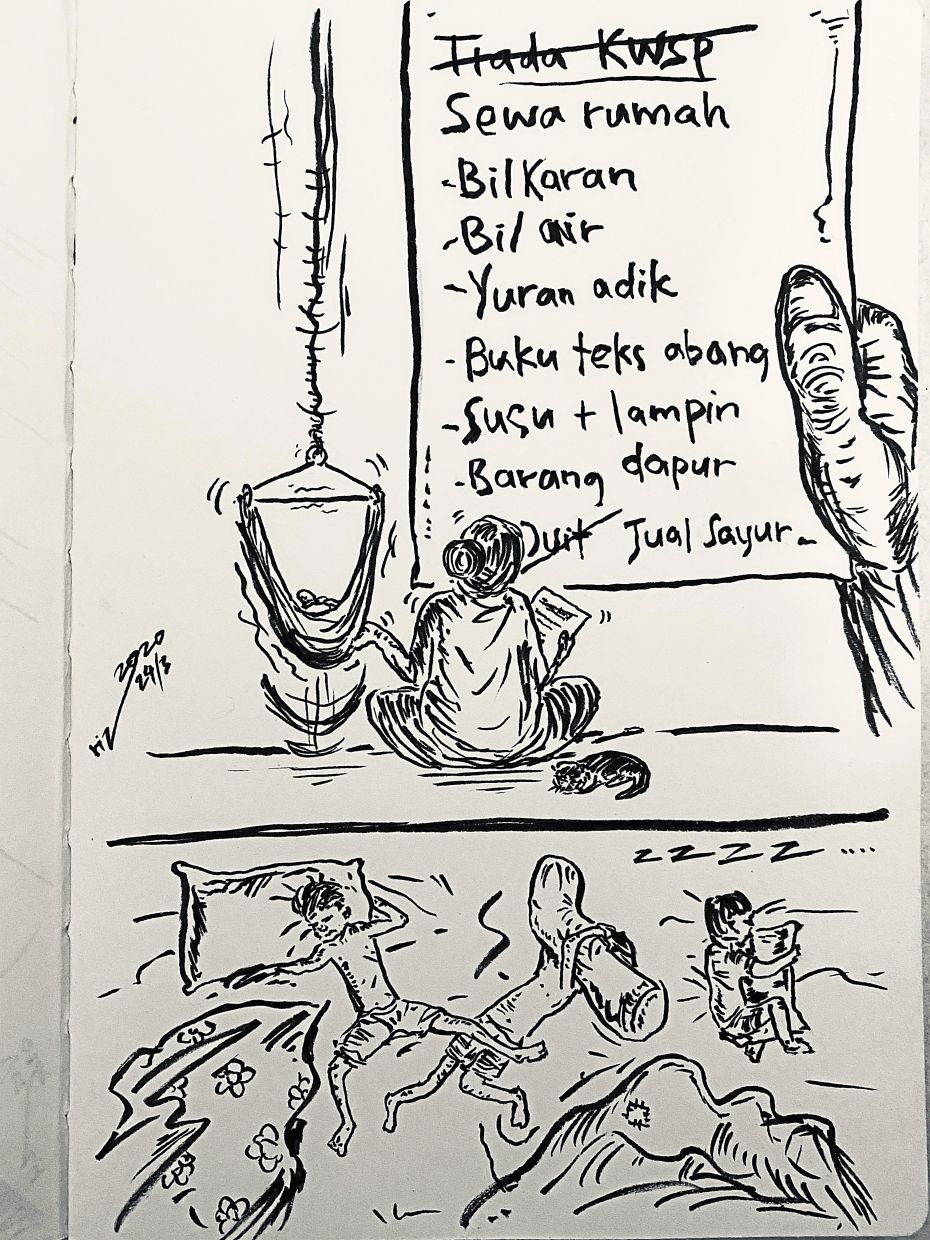 In another, which he posted on his social media page with the caption, “Good night. Dreams are not always beautiful”, we see a list of expenses – rent, water bill, school fees, milk and diapers – juxtaposed against children deep in sleep.

“Like many people, I consider myself a small town boy and my life experiences have influenced my art. When I was a teenager, I helped my mother sell vegetables at the tamu (market) in Ranau. We also went house to house to sell them.

"The joys that come with selling all your produce, or how you feel when you fall short of your target, are all emotions that I am familiar with. I know what it is like to work hard just to make ends meet. So when we find ourselves in challenging times such as what we are now facing, my heart goes out to those in need, ” he says. 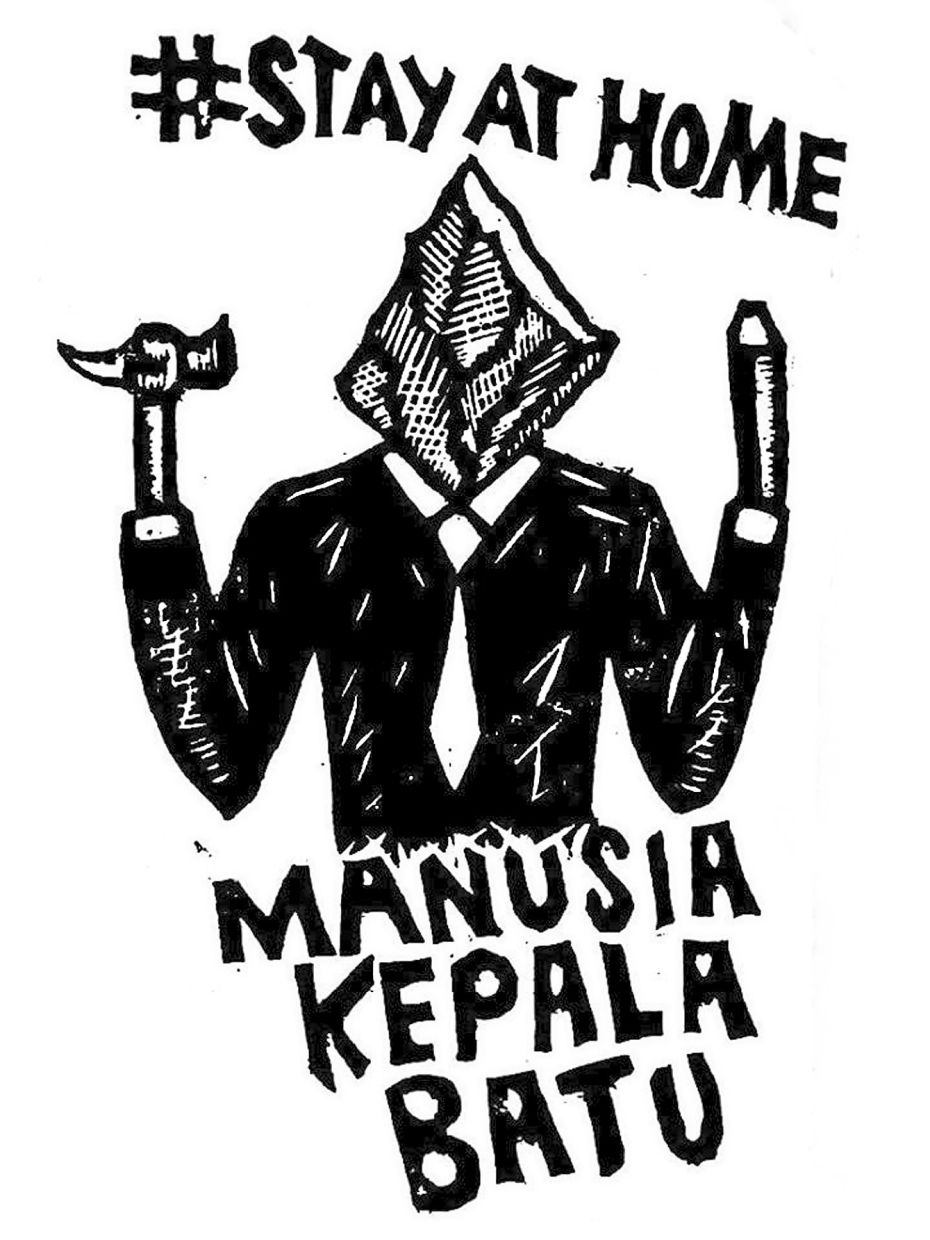 One of Pangrok Sulap's more hard-hitting works to warn Malaysians about the seriousness of the Covid-19 situation. Photo: Pangrok Sulap

Leong is toying with the idea of compiling some of his carton sketches into a book, but at the moment his focus is on keeping the momentum going with sharing new works on the pandemic and community life during the MCO.

Issues of the people

When Pangrok Sulap started in 2010, its main activities revolved around orphanages, homes for the disabled and schools in the interior districts. A keen interest in learning about woodcut techniques soon saw the group using it as a medium to spread its message through art.

The themes explored are concerns shared by many fellow Sabahans, be it social issues, inequality, exploitation of vulnerable groups, education and the destruction of our environment.

Recently, it has also started collaborating with other collectives that are running “alternative schools”, such as Borneo Komrad which is working with stateless children in Semporna.

At the moment, the Pangrok Sulap members – and its volunteers – are scattered in various locations in Sabah, with most based in Ranau.

Leong shares that unlike in the city, the issues people in Ranau (or any rural Sabahan town) face during this MCO is not panic buying. There is no toilet paper flying off the shelves there as there is no need for that. “Back in the kampung we don’t need toilet paper in the same way... we have water from the mountains, we make use of that, ” he says candidly.

However, many have lost their jobs during this period. Since many industries have practically come to a standstill, they are unable to find new sources of income.

“As for everyday sustenance, vegetables might be aplenty in the villages, but when there are no sellers and no buyers, they are not getting to where they need to be. People are unable to leave their homes so everything is affected, ” he says.

Life might not have been easy to start with, but now it is even more challenging.

Leong hopes that Pangrok Sulap’s art will give a much-needed boost of positivity to all. Because it is especially when the going gets tough, that hope must prevail.

To commemorate Pangrok Sulap’s 10th anniversary, plans are underway for an exhibition in KK at the end of the year... for now, at least. 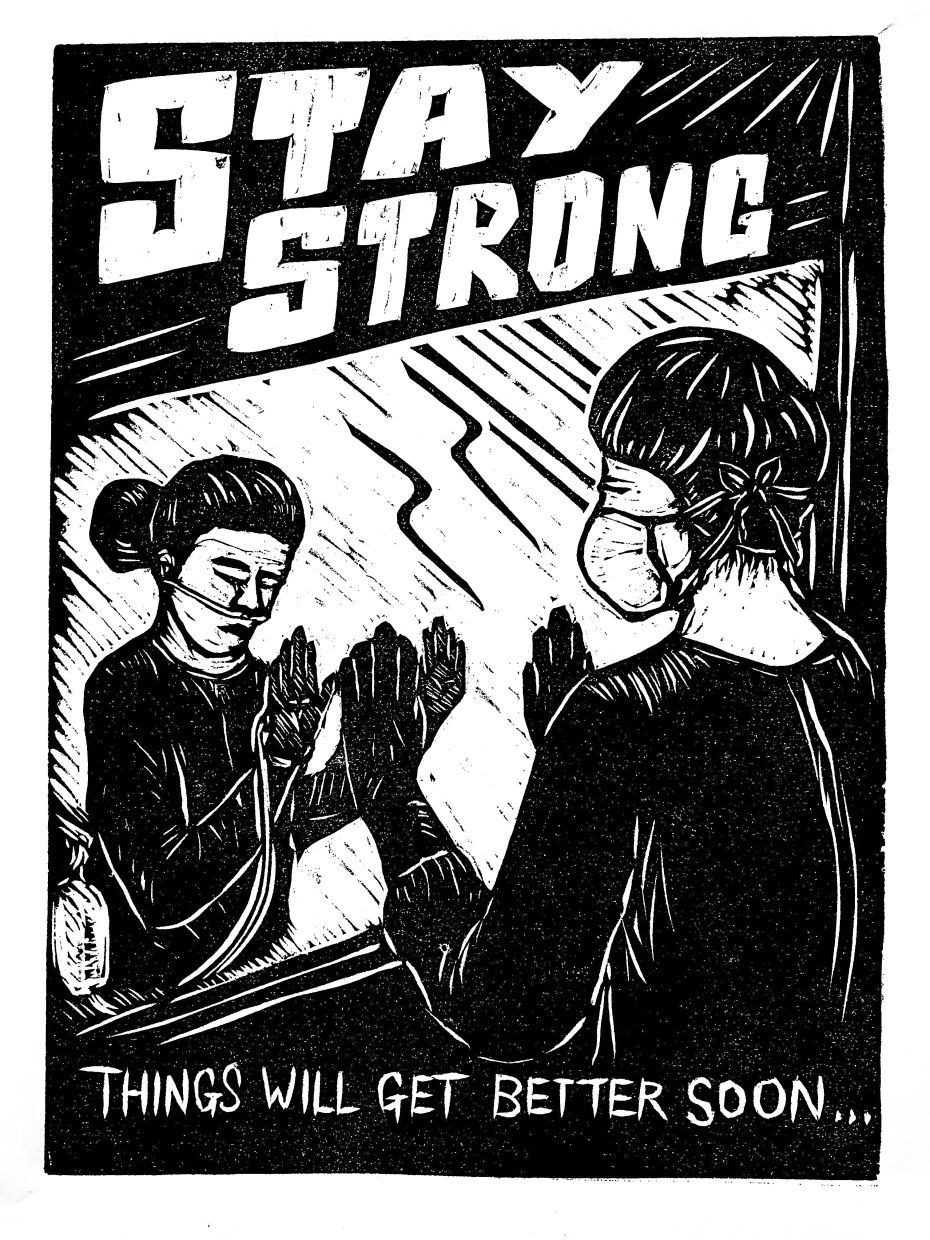 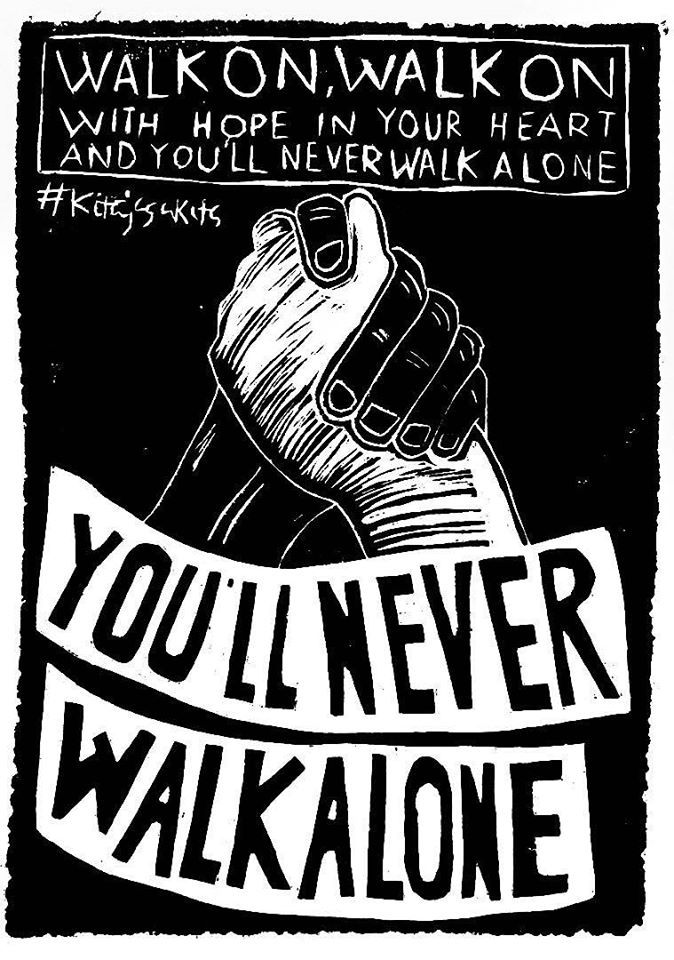 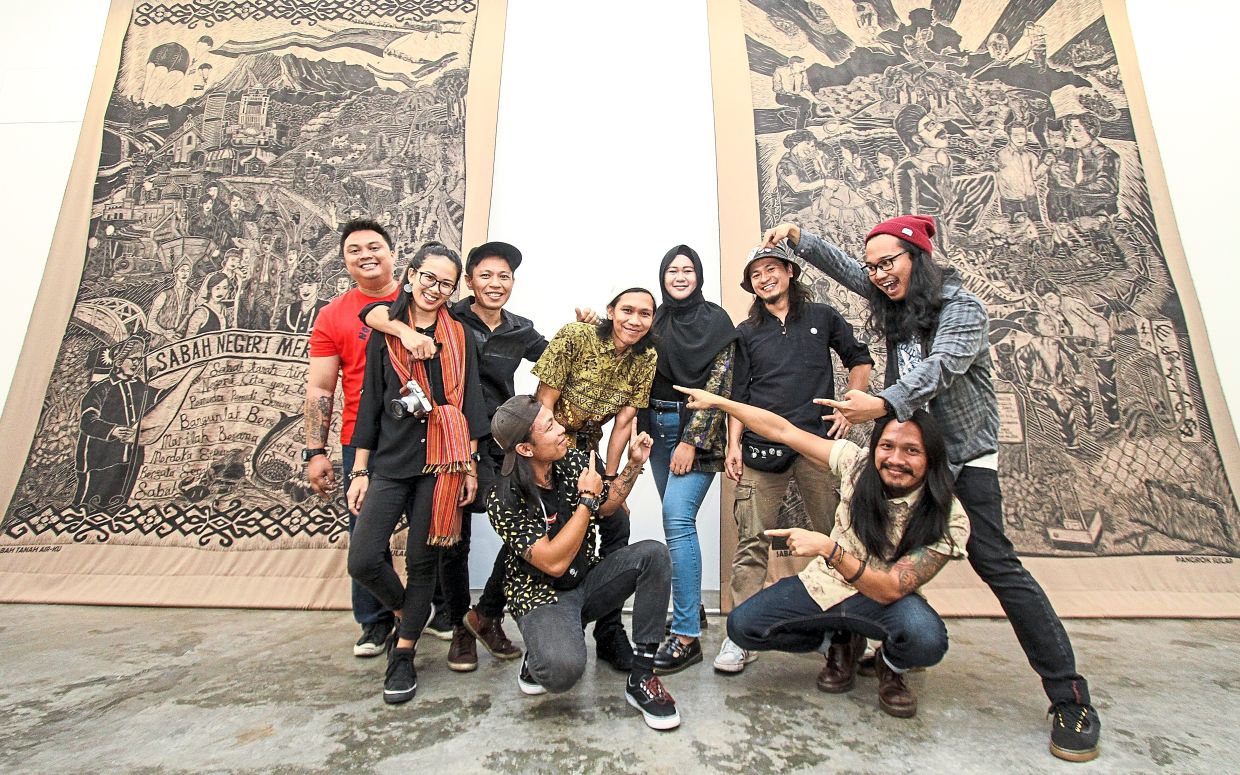 The Pangrok Sulap collective members have been working from home individually during the movement control order, and sharing their woodcut works online. Photo: Pangrok Sulap

A woodcut print that shows a unifying tune can go beyond football boundaries. Photo: Pangrok Sulap

One of the more direct Pangrok Sulap artworks to hammer home the Covid-19 message to stay home. Photo: Pangrok Sulap

Pangrok Sulap members have been working on a new PSA series in these difficult times. Here is a work that pays tribute to frontliners. Photo: Pangrok Sulap

The Sabah influence in Pangrok Sulap's work is distinct, but the collective's inspirational messages are well understood beyond its home state. Photo: Pangrok Sulap