So much time to read, but Malaysia's book stores are closed. What now?

Tintabudi bookshop in Kuala Lumpur will remain shut for the duration on the movement control order in Malaysia. Founder Nazir Harith Fadzilah says the store will rely on online sales to sustain itself. Photo: The Star/Azlina Abdullah

Homegrown independent bookstore owners and literary groups will be heavily affected by the two-week movement control order (MCO) that was announced on March 16. With their businesses temporarily ordered to close, many are worried about an uncertain future, with some resorting to new methods to keep themselves afloat.

Elaine Lau, co-owner of Petaling Jaya bookstore Lit Books, says in light of the MCO, their physical store in Petaling Jaya had to be closed, and two major in-store events postponed. She and her husband, fellow co-founder Min Hun, had not expected things to escalate as quickly as they did, and that they would be in an environment of restricted movement.

“Our plan was to set up an e-commerce site at a later time when we’re more established, as it would require additional capital investment not just in terms of building the site, but also buying more stock. Now that we’re in this situation, Min Hun is working to set up a database on our blog where customers can browse and place an order, ” says Lau, in a calm manner.

“They pay for the order via bank transfer, and we post the books to them or arrange the delivery. It’s not a full-on e-commerce platform but it will have to do for the time being, ” she adds.

Lau says that through the past year, they had also started taking orders by request through Facebook and Instagram. They were very thankful to their regulars and new customers for supporting them.

Is there anything that could, perhaps, help their situation now?

“Some form of tax and utilities relief (from the Government) for small businesses like ours would be much welcome, ” says Lau. Lit Books will be relying on its database, shop blog and social media to connect with its customers. Photo: The Star/Low Lay Phon

Echoing her sentiment is Nazir Harith Fadzilah, the founder of Tintabudi bookshop in Kuala Lumpur. He suggests that some sort of subsidy be imposed to help small business owners with rent and other fixed costs.

“I think there’s been a slowdown in business ever since the virus was first announced earlier. People were reluctant to go out and sales were affected. I only hope a cure comes for this virus. If the restriction of movement were to be extended, we would have no choice but to just wait for things to subside, ” he says.

While the situation is helped by Tintabudi's online sales, most of its business, admits Nazir, is still being done in its brick and mortar store at the Zhongshan building in KL.

Amir Muhammad, a publisher and the owner of Kedai Fixi bookstore, says business prior to the restriction had been fine, mostly because of its location in the Sunway Putra Mall. However, this two-week closure means a complete loss of income, even though the staff will continue to get their full salaries.

He adds that his store is now banking on online promotions.

This is mainly to make up for the postponement of this month's KL International Book Fair (KLIBF), where he had been targeting a gross revenue of RM500,000. He had also already paid full rental for the event.

“We also halted printing of our six latest books and are selling them as e-books for now, but we still plan to print them for KLIBF when it happens, ” says Amir, who is also the founder of independent publisher Buku Fixi.

Some book spaces have announced special promotions and content online.

The Rumah Attap Library and Collective in Kuala Lumpur might be shut. But there is always a way to keep the spirits up when it comes to book lovers. It is sharing regular posts and resources on its Facebook page. This includes a list of disease-related books, with Albert Camus’ The Plague and Susan Sontag’s Illness As Metaphor featured prominently. Rumah Attap Library and Collective in KL is temporarily closed, but it continues to provide content on its Facebook page. Photo: The Star/Yap Chee Hong

Petaling Jaya-based bookstore Gerakbudaya, on the other hand, has launched a special #StayHome&ReadBooks sale on its website, where it is selling sold many titles at prices as low as RM10.

“The movement control order has taken us by surprise, but we will be operating as usual once it is lifted. In the meantime, we will continue working on publications and we’ll try to continue as normal or as normally as possible under the circumstances, ” reads the Gerakbudaya update on Facebook.

“Do support us, and your local bookstores and publishers during this time - the literary ecosystem is a fragile thing, ” the message adds.

Readings, the longest-running literary event in the Klang Valley, is planning to have an online series. The event organiser Sharon Bakar says for this month’s meeting, she is planning to ask each of the readers to make a video of themselves reading. The readings will then be compiled, with added introductions by Sharon, and put on Facebook or YouTube.

“We don’t know exactly how it will work yet. We will let you know when we have worked it out. But hopefully we will be able to continue like this until we can safely meet up in real life again. We are not defeated!” says Sharon. 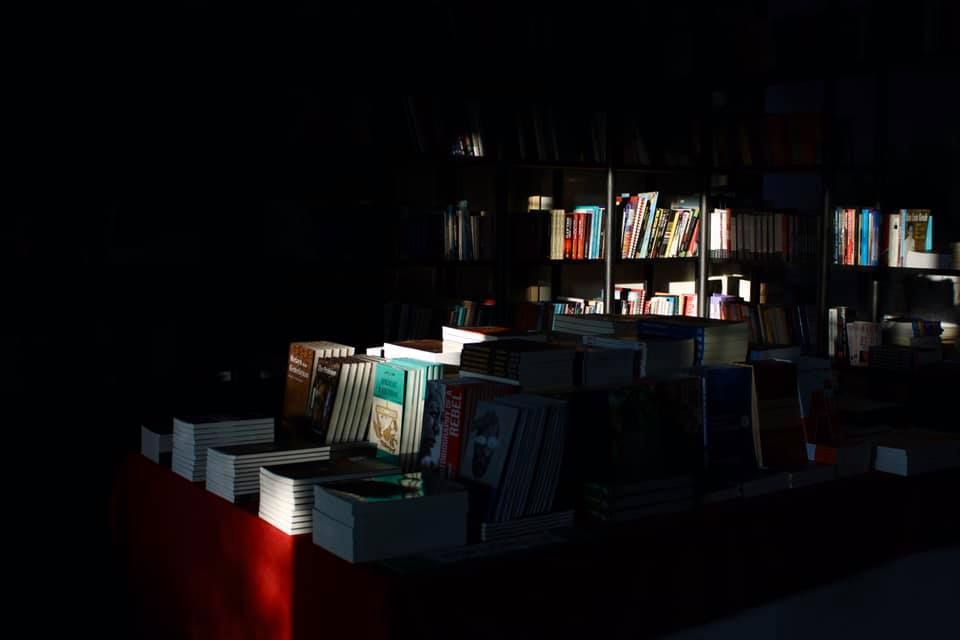 Gerakbudaya put up a darkened bookshop image on its Facebook page, but urge customers to continue supporting the store through the #StayHome&ReadBooks online campaign. Photo: Gerakbudaya

The KLBAC Speculative Fiction Book Discussion group (an offshoot of the Kuala Lumpur Book Appreciation Club) recently had an online discussion on Facebook instead of a regular meet-up.

"Advantages are that questions, answers and discussions would be preserved online for members to view at their leisure. Disadvantages are a lack of spontaneity and occasionally, a less robust exchange of opinion," says Isaacs.

She reveals the group will be holding the next online book discussion on March 30 for George Orwell’s classic book 1984.

This event, she adds, will be a better gauge to see how members respond to "online meet-ups".

In future, it is possible that the group discussions will include both online and physical gatherings.

“This MCO has certainly made us re-evaluate how we have been conducting events and gatherings, made us think of what works and what doesn’t. It provides an opportunity for us to experiment with different techniques, and take advantage of technology even more. Hopefully, it will also translate to a more efficient system for all of us, ” concludes Isaacs.

Can't travel? Don't worry! Read your way through Malaysia with these books

Playboy US ends print edition due to Covid-19