The ancient remains of Qasr al-Farid – a rock-cut tomb and part of an ancient Nabatean settlement – stands amidst imposing cliffs and striking rocky outcrops at Al Ula, Madain Saleh (aka Hegra). It is a Unesco World Heritage Site. Photo: AFP

After launching in the Coachella Valley in 2017, the Californian site-specific art event Desert X is now expanding with its first-ever edition in the Al Ula region of northwestern Saudi Arabia.

The artists have been tapped to create site-specific artworks that “respond to different desert cultures and environmental conditions, and to the historical context of Al Ula, ” in an effort to “connect desert communities and cultures through contemporary art.”

Among them are NAJMA (She Placed One Thousand Suns On The Transparent Overlays Of Space) by Lita Albuquerque, in which the American artist invokes the cosmic myth of a female astronaut landing on Earth to spread light and information.Rayyane Tabet will present the latest installment of his The Shortest Distance Between Two Points series, entitled Steel Rings, in which the Lebanese artist references the TransArabian Pipeline.

Meanwhile, Mohammed Ahmed Ibrahim will reflect on the fragility of the desert ecosystem in Falling Stones Garden, which consists of rock-like forms painted in highly saturated colour.

First announced back in October, Desert X Al Ula was met with a firestorm of criticism for accepting funds from the Saudi government’s Royal Commission of Al Ula, a government agency chaired by Saudi crown prince Mohammed Bin Salman.

While Desert X assures on their website that the site-specific exhibition “pledges to reinvigorate, protect and preserve Al Ula as a vibrant, open museum, ” critics claim that the art initiative solely promotes the agenda of the Saudi Arabian leadership.

Three of Desert X’s 14 board members, curator Yael Lipschutz, philanthropist Tristan Milanovich and artist Ed Ruscha pulled out of the project back in October.

Desert X Al Ula will be held from Jan 31 to March 7 in the Al Ula desert in northwest Saudi Arabia, with the full list of participating artists available on the official website. – AFP Relaxnews 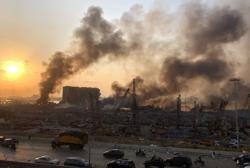