On the 30th anniversary of the crossover event that changed everything, Worlds Of Wonder takes a look back at this milestone.

The year was 1985, and the song on my mind was Tears For Fears’ Everybody Wants To Rule The World. Unfortunately, at the time, I didn’t even have control over my supply of comics, let alone the world.

During that “Dark Age”, there was no Internet or Previews magazine, and comics specialty stores didn’t exist here yet. Those were the days when you wished your best friend was someone working in the airline industry or studying in the United States.

To make things worse, the newsstand ordering system then always missed out on key issues (such as #1 issues, annuals and special editions), and you ended up having to pay a huge “ransom” to get it from scalpers in the secondary market. 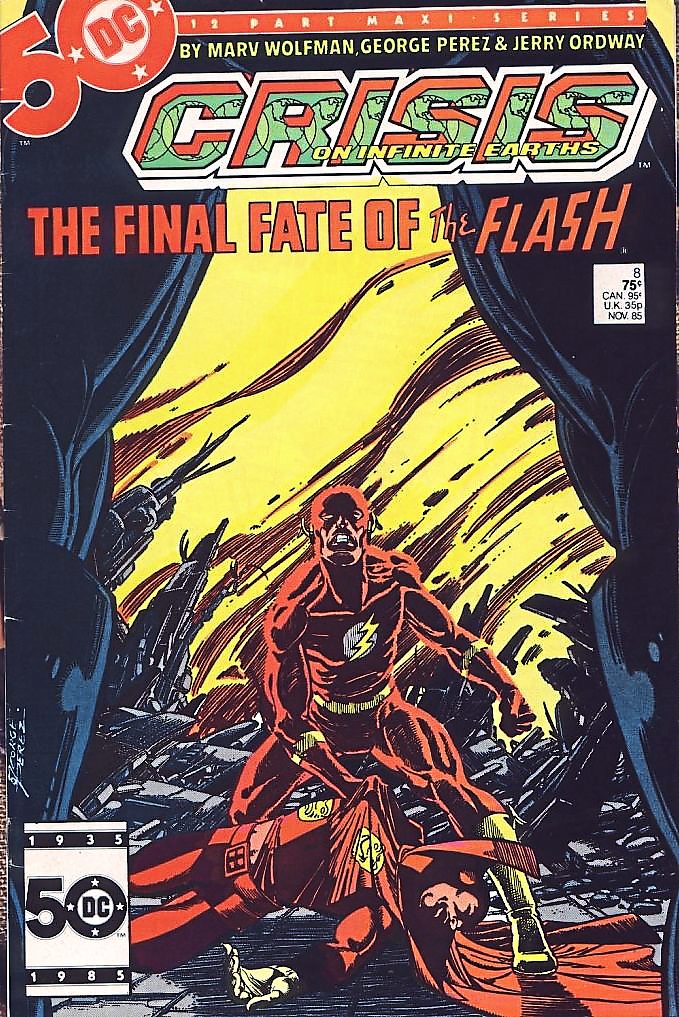 The situation escalated from merely irritating to desperately dire when Crisis On Infinite Earths #1 (COIE) was released. After all, it’s not every day that the DC Universe turned 50, and this was a milestone no fan should miss.

Three months after the issue was released in the US, the first “official” sighting of COIE (issue #4!) finally graced our local newsstands.

By that time, most comic fans (yours truly included) had already traded in two months’ allowance to buy issue #1, and were still saving up for issues #2 and #3. It sounds pathetic now, but this is still the first thing that comes to my mind every time someone mentions Crisis On Infinite Earths.

Thirty years and two complete sets (some certified and autographed) later, I look back at COIE with positive memories – as a worthy reconstruction exercise unlike the ones that DC and Marvel are putting us through these days.

I seriously doubt that there are many comic fans who have yet to read COIE, and as such today’s tribute is not to re-review the epic 12-issue miniseries, but rather to highlight 30 reasons why it is THE most relevant and definitive comic book event ever produced!

1. The beginning of the end

If you thought Walt Simonson’s “Doom!” mantra in Thor was the best countdown ever, every panel in COIE #1 is subliminally embedded with the word “Doom!”.

It deals not just in destruction, but an absolutely cataclysmic level, giving true meaning to its tagline: “Worlds will live. Worlds will die.”

2. The end of the beginning

The sacrifices made in COIE were not in vain, as it laid a new foundation for the DC Universe to develop. Since the finale of COIE, a single universe (as opposed to the pre-Crisis Multiverse) made it easier to re-introduce the Man of Steel, the Dark Knight, Wonder Woman, Flash, Green Lantern (and Corps), the Justice League, and so on.

3. One crisis to bring them all

Forget Marvel’s Contest Of Champions, or even DC’s own Who’s Who series; COIE featured every character in DC’s multiple universes, and even those beyond its own universe, i.e. the Charlton Comics-verse.

With a death toll that reaches across the whole multiverse, it’s no surprise that the number of body bags needed for COIE’s casualties probably exceeded the sum of casualties in all other comic books! 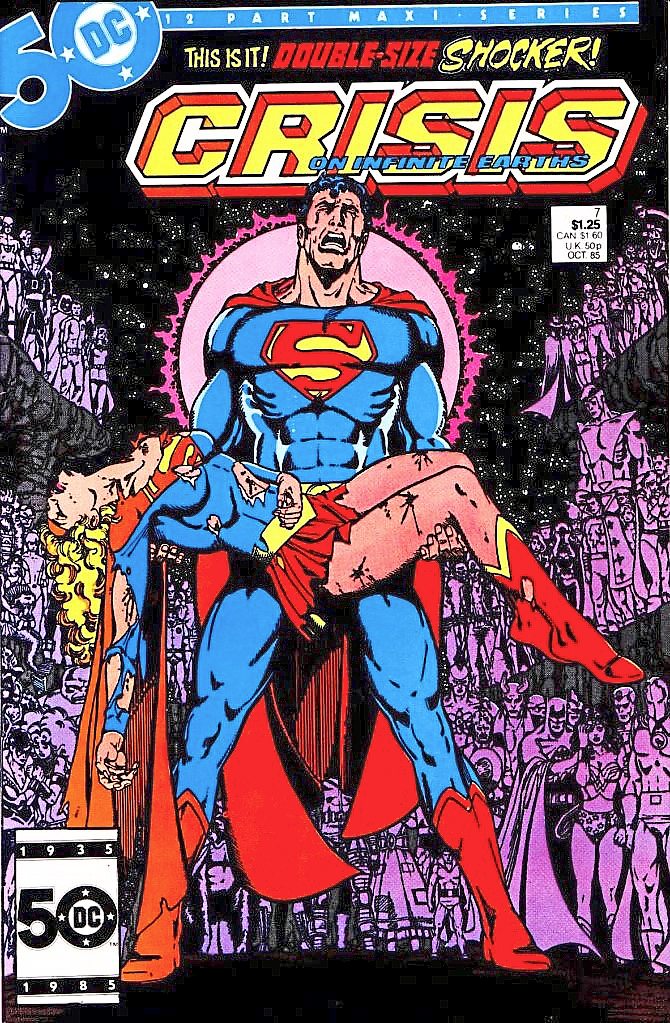 By the time you read the first six issues of COIE, you would have been “numbed” by the uncountable number of fatalities.

However, Supergirl’s death (in issue #7) marks the first major fatality, as she sacrifices her life to save Superman. This is her most defining comic book moment, but sadly, also her last contribution in resolving the Crisis.

Barry Allen has since been resurrected and even has his own highly acclaimed TV series today, but at the time, COIE #8 was supposed to be his swan song!

Had Barry stayed dead, this would have been a fitting end for the Scarlet Speedster, as he singlehandedly foiled the Anti-Monitor’s plans by destroying his anti-matter cannon.

Unofficially, the DC Universe started with a bang when Kal-El began his journey from the exploding planet Krypton.

However, the impact of that event seems insignificant now compared to the trail of destruction caused by anti-matter upon the multiple universes.

To top it off, the battle between The Spectre and Anti-Monitor at the dawn of time (COIE #10), rewrites the starting point for the entire DC Universe!

While today’s Elseworlds, Spider-verse, Ultimate-verse and What Ifs? are good thought-provoking reads, the initial Multiverse that DC had pre-COIE was confusing as hell, and in most cases, resulted in some really nonsensical plots.

Though the Multiverse did eventually return, the post-COIE era of having just one universe helped to simplify plots and streamline continuity througout DC’s books.

9. Return of the Charlton heroes

COIE wasn’t just a massive clean-up exercise, as it also offered a spring board for Charlton characters (Blue Beetle, Peacemaker, Captain Atom, The Question, etc) to relaunch their careers.

11. Passing On The Mantle

Two notable changing of the guard moments happened, with Wally West aka Kid Flash taking over Barry Allen’s place as The Flash, and Guy Gardner (finally) inducted as a Green Lantern!

While attributing the success of COIE to just the artist seems rather unjust to the writer (Marv Wolfman), inkers (Dick Giordano, Jerry Ordway, Mike Decarlo) and colourists (Anthony Tollin, Tom Ziuko and Carl Gafford), I still feel that no other artist could have illustrated this massive story in such masterful fashion.

From the covers to interiors and the trademark Perez rubble, his feat in drawing the entire DC Universe and its myriad characters shall forever remain a benchmark for all artists.

His name is synonymous with creating the Teen Titans and Blade The Vampire Slayer, but his ultimate success was with COIE and the follow-up History Of The DC Universe. Definitely THE writer of the 1980s; he and Perez were a true Dynamic Duo among creative teams.

The gatefold cover of issue #1 personifies the beauty of COIE, which is a must-have poster for any comic fan/shop. To date, it remains THE gold standard for all gatefold covers! 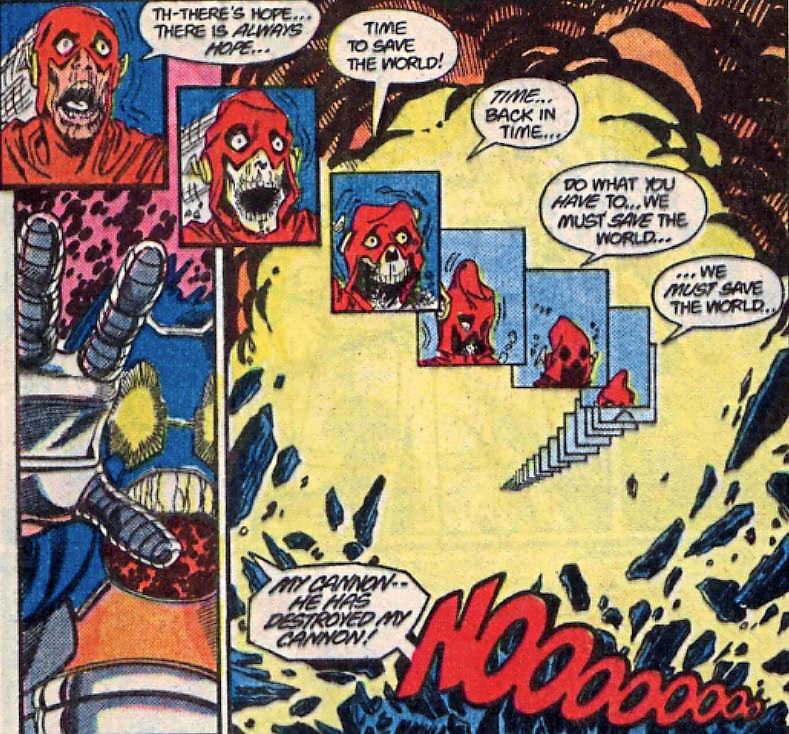 Barry Allen sacrifices himself to destroy the Anti-Monitor’s cannon in Crisis On Infinite Earths #8.

Among the highlights in COIE was the chance to see different permutations of popular characters. For instance, there was the evil Luthor, a heroic Luthor, bald Luthor, Luthor with locks, son of Luthor and ... dead Luthor.

Ironically, the main antagonist of COIE wasn’t the Monitor or the Anti-Monitor but ... the Psycho Pirate, who had a field day manipulating emotions in a few universes. Post-Crisis, the highs and lows of the Crisis lived on in him, especially his “friendship” with the Anti-Monitor.

If you consider Uatu The Watcher as Marvel’s resident cosmic peeping Tom, then the Monitor holds that dubious distinction in the DC Universe. Even prior to the Crisis, his voyeuristic presence could be felt in a few DC titles, with the full-blown effects happening in the first three issues of COIE until his untimely death at the hands of his apprentice, Harbinger!

The title of this series was inspired by past crossover tales involving parallel Earths in the Multiverse, namely Crisis On Earth-Two and Crisis On Earth-Three. Subsequently, it also inspired limited series such as Zero Hour: Crisis In Time, Identity Crisis, Infinite Crisis and Final Crisis.

Kryptonians tend to overpower their opponents – but not during COIE, as the combined might of Kal-El (Earth 1’s Superman), Kal-L (Earth 2’s Superman), Superboy (Earth Prime) and Supergirl was insufficient to defeat the Anti-Monitor. Watching them collectively “let loose” with their powers was indeed a refreshing moment. 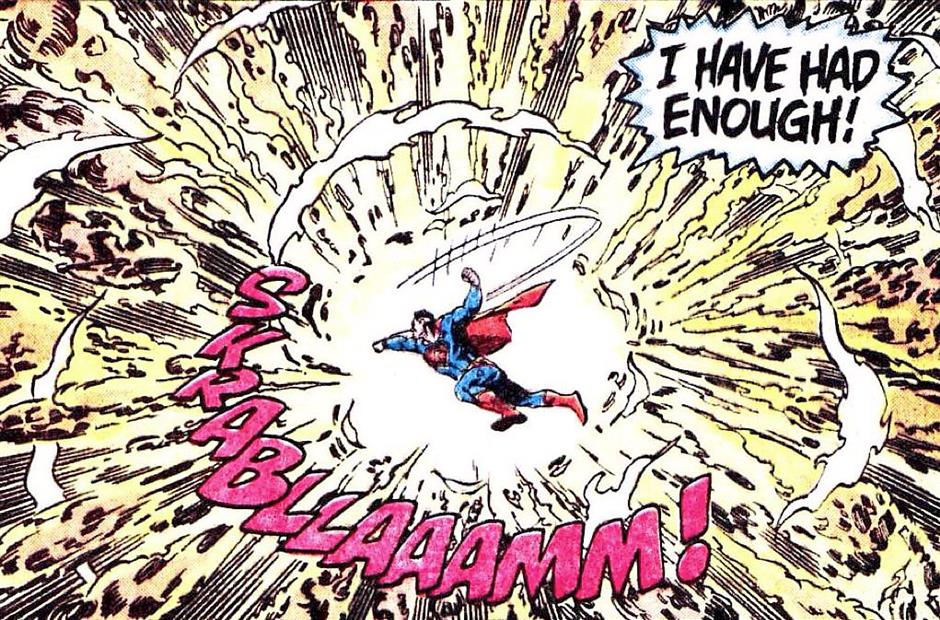 Don’t make Superman mad. You wouldn’t like it when Superman is mad.

One positive thing from the Multiverse is that it gave the original Superman (Kal-L of Earth 2) a place in comics continuity. Despite just being able to leap over tall buildings and run faster than a speeding bullet, Kal-L had the honour of delivering the coup de grace on the Anti-Monitor (issue #12), and his happy ending with Lois was the perfect tribute to DC’s most recognisable icon.

Face it folks, COIE was pretty much off-limits for the Dark Knight, as his detective skills and strategic thinking were “irrelevant” against anti-matter waves and shadow beings. Batman did have the final say during the Final Crisis event, though.

It took a special villain to bring out the worst aspects of this major cataclysmic event, and the Anti-Monitor was the perfect creation to do that! Thankfully, he was a direct opposite of his voyeuristic brother The Monitor, and didn’t come with any historical baggage – unlike other Big Bads like Darkseid, Lex Luthor, Brainiac or the Joker.

While most of the deaths in COIE were caused by anti-matter or shadow beings, one exception occured in the villains’ camp, where Psimon got his brains splattered by Brainiac, after the former attempted to perform a coup d’etat over Brainiac and Luthor.

25. Showdown at The Dawn of Time

The moment where The Spectre prevented the Anti-Monitor from rewriting the creation of the DC Universe in his own image is definitely a milestone moment in DC mythos.

Not to be confused with the post-Identity Crisis tale (JLA #114-118), COIE did drive Kal-L to go beyond his holier-than-thou persona. The ruthless change came after (thinking) he had lost Lois, and witnessing the death of Supergirl.

27. A universe of two halves

The significance of COIE has divided the DC Universe into two halves – pre- and post-Crisis. While we have had feeble attempts to reshape the DC Universe like Zero Hour, Kingdom and Flashpoint, they lacked the finesse of COIE to warrant a similar kind of impact. 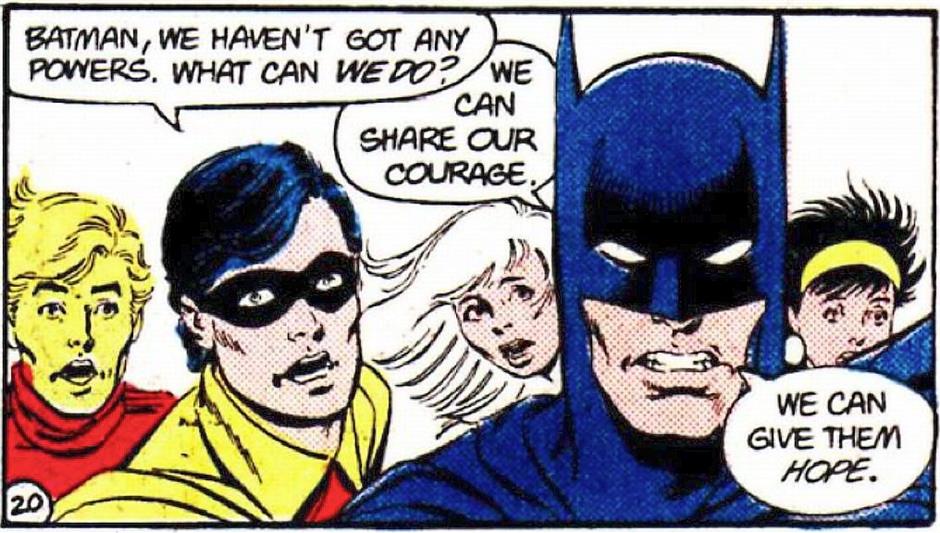 The unholy alliance took place when both factions teamed up against the Anti-Monitor, to prevent him from altering the Dawn of Time.

In issue #12, Alexander Luthor (son of Earth 3’s “good” Luthor) said this at the end to Kal-L, Lois Lane and Superboy – “Where we go now there will be no fear ... only peace ... everlasting peace.” Somehow this statement backfired and haunted the DC Universe in the events of Infinite Crisis.

COIE’s epilogue had the Psycho Pirate signing off with this statement “These days ... y-you just never know who’s going to die ... and who’s going to live.” – a befitting closure for the most definitive comic book event to date.

Now, if only the powers-that-be at DC and Marvel would take their cue from COIE and stop all those unnecessary revamps.