There are foodies who would still like to enjoy gourmet food in the comforts of their home, and restaurants are responding to their demands in this pandemic era. — 123rf.com

This year, the local F&B industry has been hard hit by the volatile changes wrought by the Covid-19 pandemic. While industry analysts were once predicting that things like juice pairings would be the breakout hits of the year, those notions have been thrown by the wayside in favour of reset options that allow for some means of survival in this tough new environment, especially as the F&B sector has recorded some of the highest job losses during the movement control order (MCO).

Which is why these days, F&B operators in Malaysia are responding to fast-changing consumer behaviour by modifying and adapting their own businesses to suit new market demands and ultimately, to try and stay afloat.

When the MCO was first implemented in Malaysia, eating out became impossible, while food delivery and homecooked food became increasingly popular options

Even though restaurants are now allowed to open for dine-in, there is an air of wariness surrounding eating out, combined with the fact that many people are still working from home and thus have less desire to go out. As a result, many established business owners have discovered that they have had to pivot and develop new products to cater to the new normal.

Joshua Liew, the spokesperson for the Malaysian F&B Operators Alliance (which has over 1,100 members) and owner of Espressolab, a chain of specialty coffee outlets says his business has changed dramatically since the MCO came into effect.

“Pre Covid-19, the working population in Malaysia didn’t have the luxury of enjoying coffee at home. Most people had to leave their homes early to beat the jam to head to work. So their daily dose of coffee was typically at cafes or coffee outlets near their workplace.“But now that working from home is a reality, my retail sales have really suffered as most of my outlets are in corporate office environments. So my sales are deteriorating but I still need to get my products into people’s homes, ” he says. 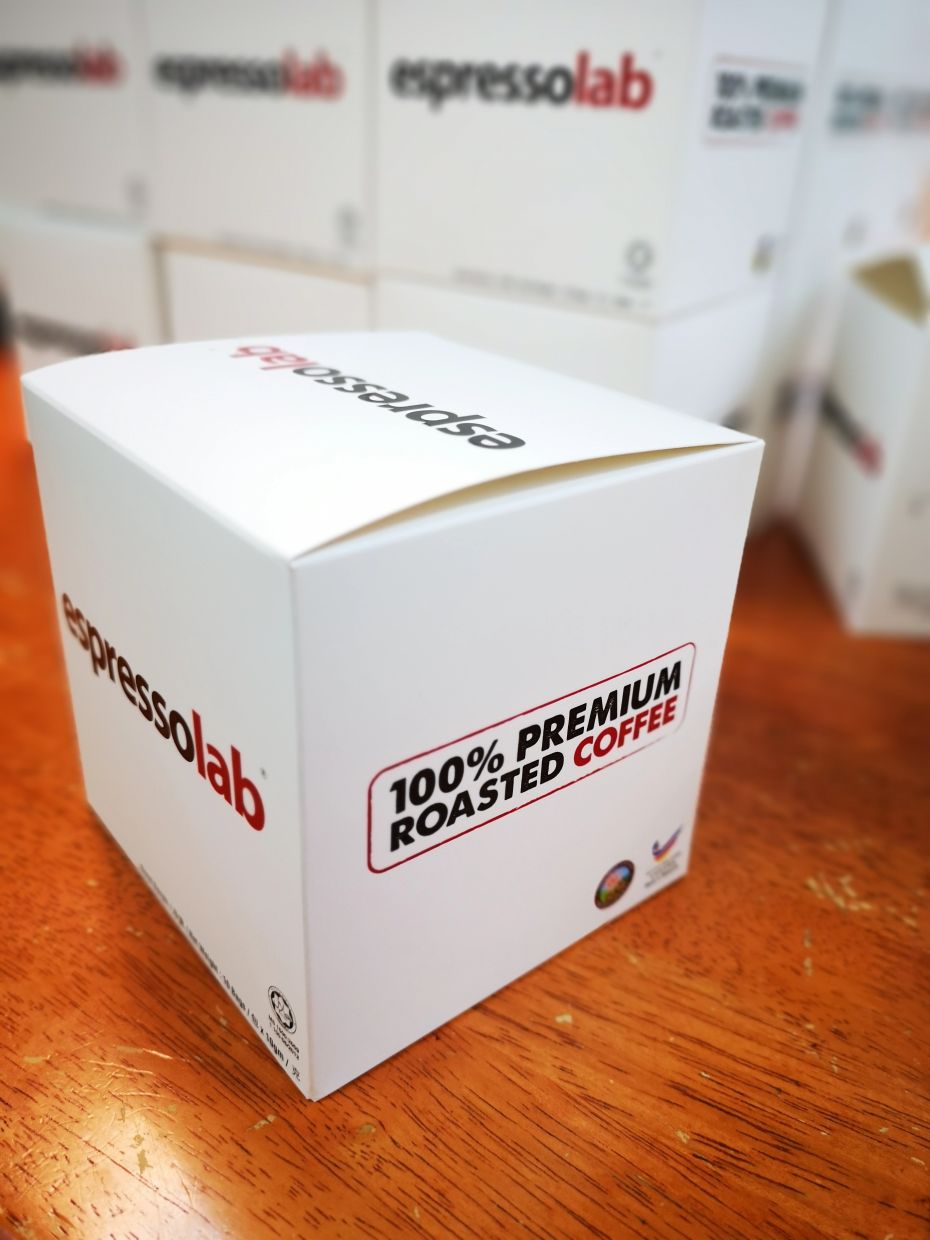 Liew introduced coffee capsules that could be delivered to customers' homes after realising that many people simply weren't coming to coffee outlets as frequently as before. — Espressolab

To combat this loss in sales and in a bid to entice caffeine addicts working from home, Liew came up with two completely new products – coffee sachets and Nespresso-machine compatible capsules delivered straight to consumers’ homes.

“Before this, I never bothered to look into this option because the market seemed too small, but now I think products that can be delivered to homes and offices might be the way forward, so I’ll have to look into getting on platforms like Lazada and Shopee as well, ” says Liew.

Liew’s strategy isn’t an isolated one. Across the industry, more and more players have come up with new menu items designed to satiate the needs of modern pandemic-wary consumers.

A major example of this is DIY cooking kits, which essentially include all the ingredients required to cook restaurant-style dishes, weighed and measured to precision and delivered directly to people’s homes. Consumers might be required to do some light cooking – perhaps pop something into an oven, chop some vegetables or simmer a sauce, but nothing that requires too much exertion. Elaborate instructions or instructional videos are also provided, so the kit is pretty much fail-safe. The kits are not designed to replace traditional menu items, but do give people looking to jazz up meals at home more options.

Restaurants like MyPizzaLab and MyBurgerLab have come up with DIY pizza kits and burger kits. Inside Scoop has a DIY cake kit and will be launching a mooncake kit and even fine-dining eateries like Skillet KL have DIY kits that utilise premium ingredients. Tham was one of the first few people in Malaysia to introduce a DIY cooking kit, packaging Skillet’s fine-dine offerings with precise instructions so that people could experience an elaborate meal at home.

Raymond Tham, chef-owner of modern European eatery Skillet and modern Malaysian restaurant Beta KL, was probably one of the first people in Malaysia to introduce DIY cooking kits in the early stages of the MCO.

Tham says he wanted to remain true to his restaurant’s fine-dining ethos (many fine-dining eateries opted to completely close or revise their menus during the MCO) but as these sorts of meals typically don’t travel well, he realised there was a gap in the market for cooking kits.

“We discovered that people wanted to have restaurant food at home but it was too much of a hassle to do it at home if they had to cook from scratch. So we introduced the DIY kit, so customers could spend more time with their families at the dining table, rather than spending all day cooking up these meals, ” says Tham.

The meals have proven so popular that Tham is intent on keeping it on his menu for the foreseeable future. Renyi Chin, one of the co-founders of MyBurgerLab, is so convinced of the long-term viability of these kits that he is setting up a company with his friends to focus on this new project. Chin says the DIY pizza kits have been extremely popular, especially with parents looking for activities to do with their kids. — MyPizzaLab

“Here’s the thing, for F&B, I think it will be awhile before things go back to normal. And you need other forms of revenue so developing these DIY cooking kits are a no-brainer for restaurants, because we need to do everything that we can to ensure that money keeps coming in.

“Also after doing a bit of research, I realise that the future is in the 90% DIY cooking kit market (where the meal is 90% complete when delivered) and you will see more and more people doing this, ” he says.

Synergistic collaborations between brands have become a popular by-product of the MCO, mostly because working together allows different entities to tap into each other’s customer base

During Hari Raya, popular cake brand Kek & Co partnered with perennially popular Inside Scoop on a four-pint party pack that incorporated both brands’ products – in a move that saw each brand benefit from the added exposure. Collaborations between brands, like this one between Inside Scoop and Kek & Co are one way brands can tap into each other's customer base. — Inside Scoop

“We have historically done quite a few of these collaborations over time. But now, I think most brands are thinking 1 + 1 = 3. So with the Inside Scoop and Kek & Co collaboration, Satira Diana (Kek & Co co-founder) could introduce our products to her influencer customers and we could do the same – it is basically an excuse for us to pitch to each other’s customers, ” says Inside Scoop co-founder Edmund Tan.

Satira believes this is something that is going to be happening a lot in the future. “I think you will see more and more brands collaborating with each other and leveraging on their strengths, ” she says.

A recent survey by recruitment company JobStreet indicated that nearly two million Malaysians could be out of a job on the back of the pandemic. Add to this the fact that Bank Negara data shows that Malaysians have been saving more than ever these past few months and you have a potential recipe for disaster for fine-dining restaurants where patrons traditionally splash out hundreds of ringgit for a meal.

It is why some fine-dining restaurants have opted to introduce cheaper menus to help tide them through these difficult times. Isadora Chai’s acclaimed Bistro a Table now has a two-course lunch menu, priced at RM50 per person, while fine-dining modern Indian haunt Nadodi introduced a seven-course meal, to complement its existing 11-course and nine-course menus. The meal, priced at RM390, was designed specifically in response to the pandemic.

“The whole idea to introduce the seven-course menu was because of the pandemic. We also had a five-course degustation menu when we reopened, priced at RM280, but no one seemed to be ordering that, so we took it out, ” says Kartik Kumar, Nadodi’s brand director.

Jeff Ramsey, a celebrated chef who helms vaunted Japanese tapas restaurant Babe in Damansara Heights, Kuala Lumpur, is also going to be doing a massive pricing and menu overhaul to cope with the current economic downturn.

“I think everyone has to re-evaluate what they’re doing and what they can do moving forward. Because as soon as something like this pandemic happens, nobody cares about luxury products and this is not a cheap restaurant, so we are changing the way we do things and coming up with more affordable price points.

“So while our menus were previously upwards of RM300 per person, we are looking at doing more family-style food that will cost between RM50 and RM100 per person.

“We’re trying to make this a spot that people can come to every week, ” he says. Restaurant-style DIY cooking kits might be here to stay