BEEF stroganoff is a classic Russian dish named after the influential Stroganov family and its invention has been attributed to French chefs who worked for the family in the 19th century.

It is basically pieces of beef cooked in a sauce of sour cream, with variations that may include onions, mushrooms, tomatoes, capsicum and white wine.

The first time I had this dish was more than 30 years ago in the United States where the slices of beef were sautéed with onions, mushrooms and capsicum.

A thick luscious sauce smothered a bed of flat yellow pasta, called egg noodles in the US.

Imagine my surprise when I ordered the dish in Malaysia and was served beef over buttered rice. I found out after further reading that this was one of the variations that the dish had attained after it spread around the world, specifically in Hong Kong and Australia.

This Russian contribution to world cuisine has indeed evolved from its French origins.

A friend in the US taught me this recipe, which became a regular dish at my apartment, mainly because the ingredients were so readily available and it was so easy to prepare.

Served over pasta, it was a complete meal for a student on a budget.

I used to cook it with cheaper cuts of meat such as flank, chuck or round, but would recommend tenderloin as the preferred cut of beef for stroganoff because it needs to be cooked for a short time. The traditional recipe calls for the meat to be cut into cubes, but I prefer to slice the beef.

If you freeze the meat before cutting, you can get really thin slices of beef for this dish.The original recipe alludes to smetana, which is a type of sour cream from Eastern Europe quite close to crème fraîche, but any similar cultured cream may be used.

If you like the sauce to be thicker, you may use milk instead of water to thin out the sour cream.

However, instead of water or milk, you may also use wine, which I use to deglaze the pan after searing the beef. Although we would intuitively associate red meat with red wine, my culinary sifu has advised me to use white wine because the red would cause the creamy sauce to turn pink.

But you may serve this dish with a glass of red wine, a befitting salute to Russia Day, its national holiday celebrated annually on June 12 since 1990.

1) Heat olive oil in a pan and sauté onions and garlic until slightly wilted.

2) Add mushrooms and sauté until they start to water.

4) Add in beef and sear until cooked.

5) Add sour cream and water and bring to a light simmer.

6) Season with salt and pepper and keep warm. 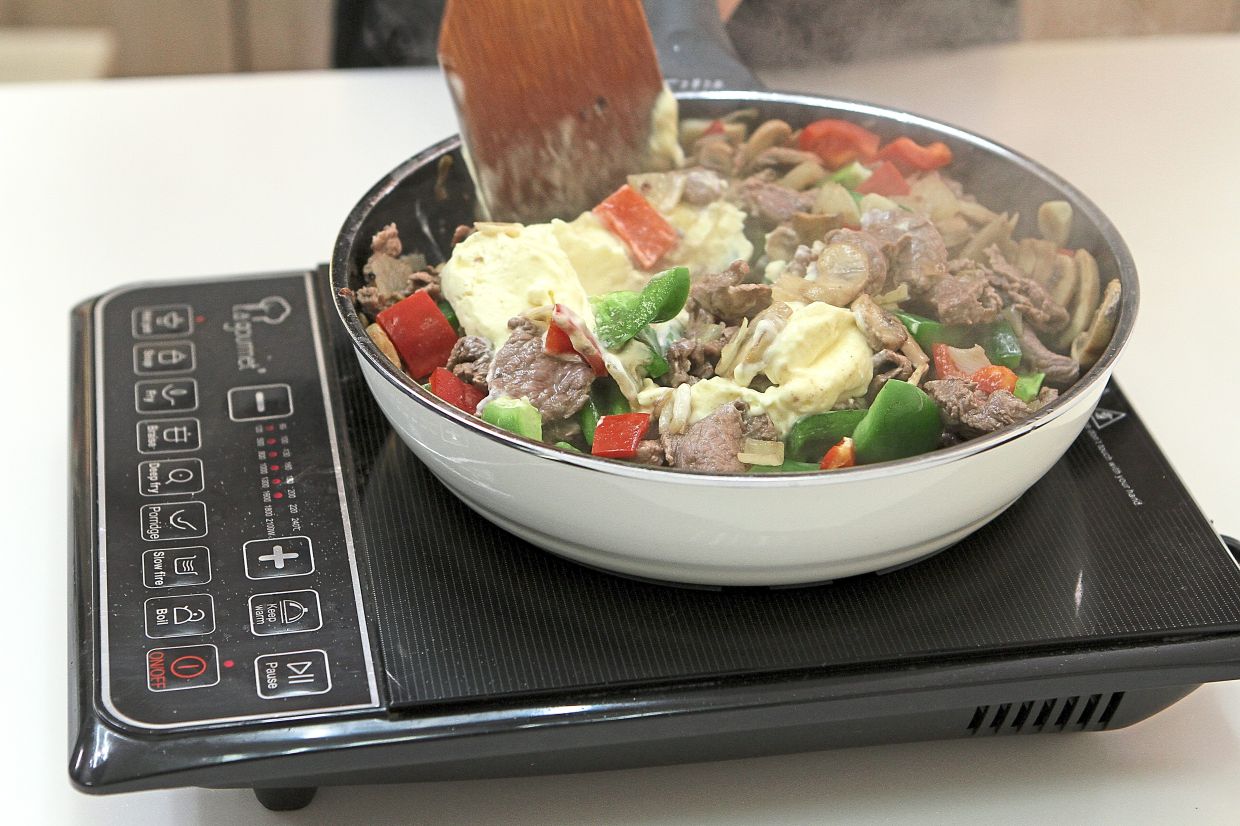 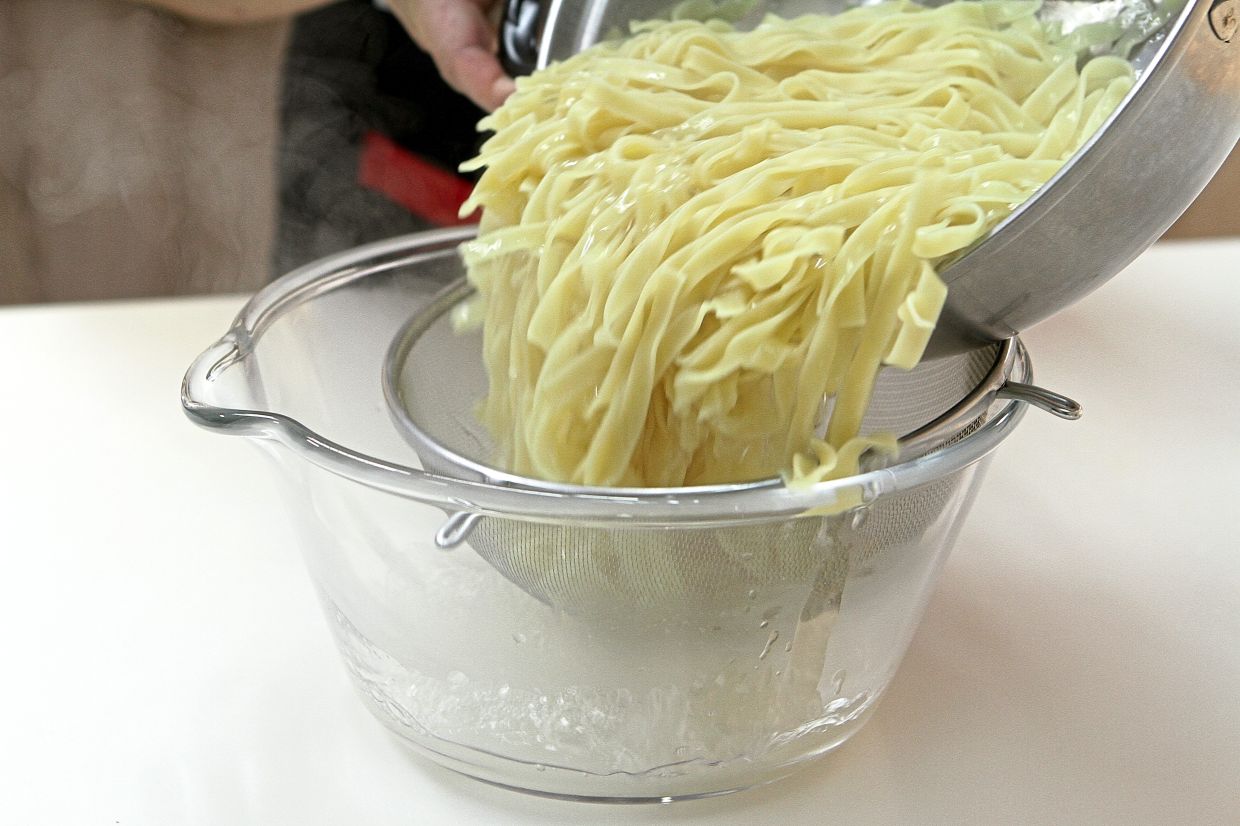 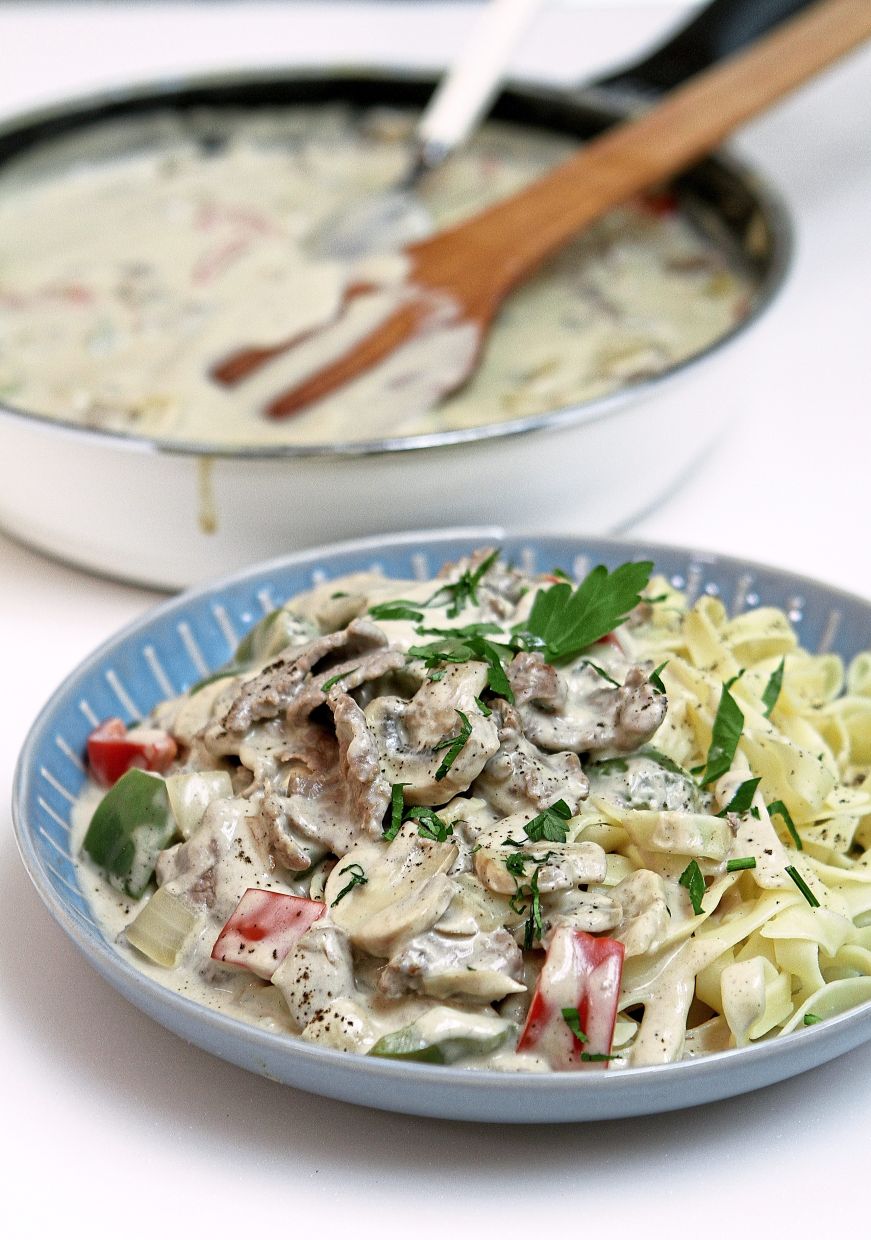 To make the beef stroganoff sauce, saute onions until wilted but not browned.

Sour cream is the all-important base for beef stroganoff sauce.

The traditional accompaniment for beef stroganoff is egg noodle or fettucine.