Each slice of eggplant is coated in a delicious sticky-sweet sauce. Photos: YAP CHEE HONG/The Star

Nam is an eatery that conveys both a sense of effortless sophistication and, conversely, a uniquely casual everyday quality.

The gleaming white Zen marble table tops, for instance, contrast with the heaving activity emerging from the cut-out spaces that allow diners to see into the busy open kitchen.

And then there is the quiet, foliage-laced eating area outside which is the polar opposite of the animated chatter taking place in the elegant indoor eating area.

It’s a yin-yang space that seems to successfully straddle all sorts of divides. Nam is based on an idea that Au had five years ago and is focused on Vietnam’s unique culinary footprint.

The creation of Au Tai Hon, the creative mind behind unstoppable juggernaut Kenny Hills Bakers, Nam is the result of an idea that had been fermenting in Au’s head for the past five years.

The long-held idea finally came to life nearly two months ago primarily because the original Kenny Hills Bakers and Kenny Hills Bistro in Bukit Tunku had to be vacated for renovations. With the staff left with nothing to do for six months or so, Au decided to create something for them to do. That something became Nam.

“Five or six months is too long for the staff not to do anything, so I decided to look for a spot to put them. And this spot came along and I thought it was a unique building, it’s one of those period buildings which I thought was interesting.

“I just wanted a restaurant with a little bit of Western and a little bit of Asian without too much confusion. And Nam is based on Vietnam’s history – because the country was once colonised by China and France, so that offered a story to tie this together.

“So I thought I could do this concept and build it around my roast duck and chicken rice, ” says Au.

For the uninitiated, Au’s roast duck at Kenny Hills Bistro was a legendary favourite among diners and he says that when the outlet closed, he was inundated with queries and requests from regular customers all lamenting the loss of their beloved poultry. The crispy roast duck from Kenny Hills Bistro's hall of fame has been been recreated to perfection at Nam.

At Nam, diners can indulge in the signature roast duck rice (RM28) which features all the usual sidekicks – white rice, house made dried chilli paste and double boiled soup.

Despite all the attractive attributes of the other players in this constellation, the duck is undisputedly the show-stealer here. Crisp burnished skin tops a thin layer of melt-in-the-mouth rendered fat which segues effortlessly into perfectly tender meat. It’s the duck of your dreams, one that will (no doubt) feature repeatedly in your nocturnal fantasies.

If you’d like to try some less familiar options on the menu (and why not if you’re already there?), definitely have the crispy eggplant with fragrant dressing (RM26). Each fat eggplant slice is coated in a thick batter, which forms a crispy shield that succumbs marvellously to a silken soft inner core. The sticky-sweet sauce that coats each eggplant piece meanwhile makes for a great addition to this dynamic A-team. The crab banh xeo is a revelatory affair bound to delight from the very first bite.

If you’re feeling like nibbling on the ocean’s bounty, definitely try the crab banh xeo (RM30). This Vietnamese savoury fried pancake is an addictive little seductress – a crispy, thin crepe wrapped around a filling bursting with bean sprouts, carrots and lots of plump tufts of crab.

Top this concoction with the fresh mint leaves and spicy nuoc cham sauce (typically flavoured with fish sauce, chilli, lime and sugar) served on the side and sit back and enjoy the profusion of explosive flavours and textures coursing through your palate, unheeding of their power to bewitch and entice. 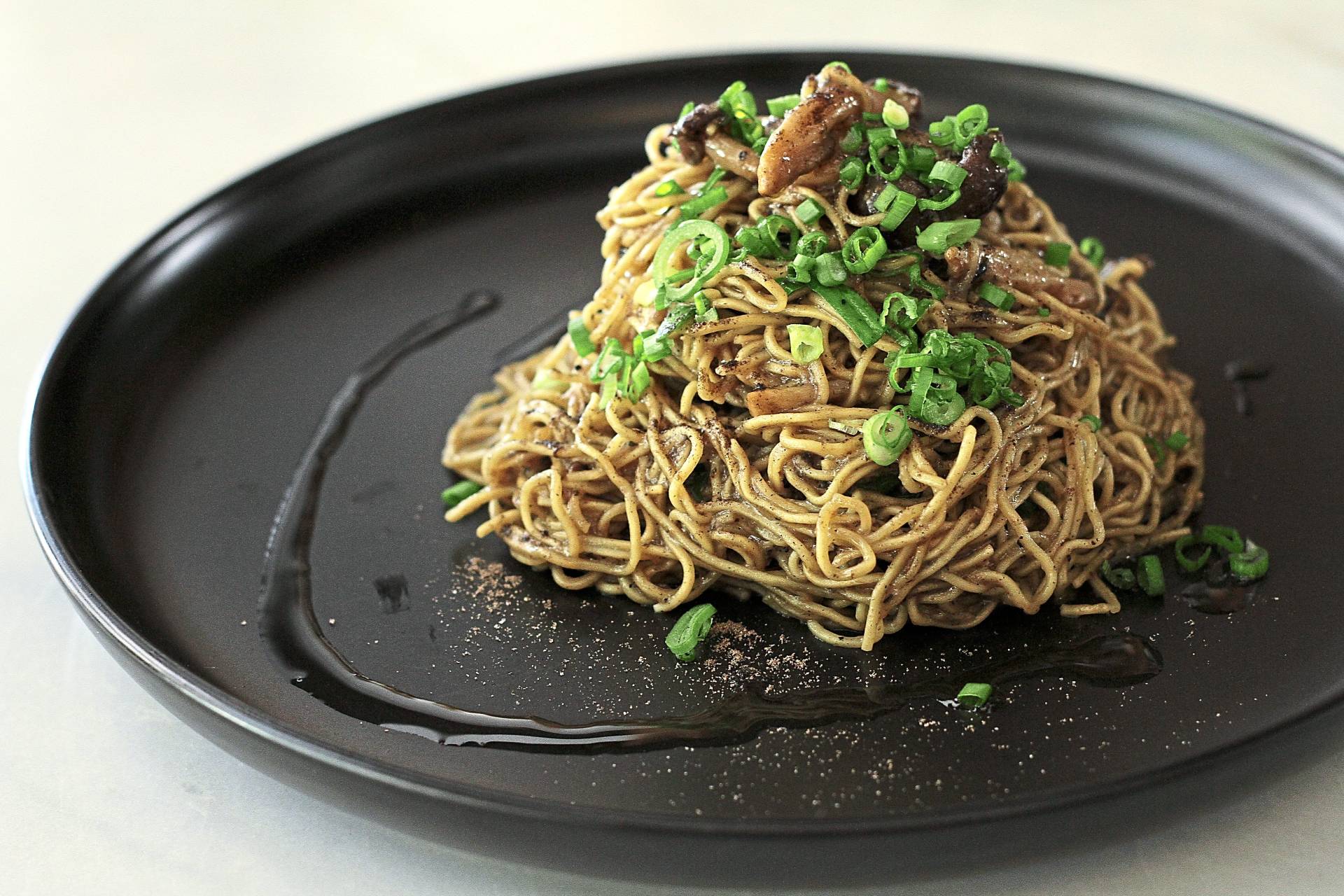 The truffle egg noodles are not bad, but not as illustrious as other offerings on the menu.

The truffle egg noodles (RM32) meanwhile features homemade egg noodles with braised mushrooms and French truffle oil in what also marks a strong pull back to Earth after the euphoric high of the crab banh xeo.

In this adaptation, light, uncomplicated flavours prevail in what proves to be a less memorable entry on the Nam menu.

The same cannot be said about the sticky Sichuan lamb ribs (RM48) with ginger and pickled cucumber. The lamb here is excellent – gently crispy and sticky on the outside with malleable, juicy meat inside that will appeal to carnivores of every stripe. Add the lime and tangy chilli sauce to the beef pho if you’re looking to take your pho to a new punchy, electrifying new level.

Also worth trying is the Nam beef pho (RM32). Enhanced with beef short ribs, the stock is simmered overnight and has a deceptively soothing, unadorned quality to it that quickly shifts gears once you add lime and the chilli mixture provided on the side into the pho.

Once these two components become part of this equation, you’ll discover fiery, lingering heat and a deliciously tangy underbelly elevating this meal to a whole different dimension altogether.

Desserts at Nam – much like its sister outlets – are not-to-be missed affairs, so you would do well to try the crepe Suzette (RM28). Here, a soft, silken crepe is encouraged to play dress-up with elements like caramelised orange butter and a house-made vanilla ice-cream, which quickly transform it into an edgy citrus goddess in a matter of seconds.

Coffee is still paramount at Nam, and while you could easily order up a latte or cappuccino and soak in Au’s devotion to perfection, you might also want to steer away from familiar territory and try the Vietnamese coffee (RM15) instead.

Here, you’ll discover an aromatic drink with glorious caramel-like undertones that seduce the palate from the get-go.

Moving forward, the ever-enthusiastic Au is looking at opening Nam’s kitchen to some of his favourite up-and-coming talented chefs, in the hopes that this will give them a leg-up in the industry.

“I will have a couple of collaborations with young chefs who want to experiment or do new things within the confines of French, Vietnamese or Asian-style cuisine.

“I know how hard the F&B business can be, and for young chefs, it’s good for them to gauge diners’ reactions and accumulate a strong customer base so they can go out and open of a restaurant of their own with an existing following, ” he says.