Not your average German fare at Stammtisch

In Malaysia, German restaurants are generally all tarred with the same brush. If you’ve had one pork knuckle, you’ve had them all and few eateries venture beyond oft-repeated favourites, for fear of alienating diners with a slew of unfamiliar fare.

But at Stammtisch (named after a table usually reserved for family and friends of restaurant owners), diners are presented with the pleasant prospect of savouring both well-trod staples like pork knuckles and pork belly as well as adventurous new offerings like schweineschlmalz (pork lard butter), sauerbraten (wine-marinated beef slices) and maultaschen (large pan-fried dumplings).

The restaurant is the creative output of the Svrcula family, whose patriarch Dr Kurt Svrcula is a German native who also has another restaurant tied to his homeland – Bavarian Bierhaus at The Curve, Mutiara Damansara. The interior of the eatery is modern and very welcoming.

“Having had that restaurant, we realised that German food was becoming very standard in Malaysia because people just thought it was pork knuckles and schnitzel and that would constitute a German restaurant.

“And we discussed it and realised that it needed to go through a reboot. So at Stammtisch, we are attempting to revamp people’s mentality towards this cuisine, because everyone thinks it is very pork-based and portions are really huge. So, for this restaurant, we are offering dishes that are different and very digestible for individual portions, ” says Kurt’s son Mikhail, who is in charge of the restaurant’s branding and social media.

To ensure the eatery got off on the right foot, the entire family was involved in putting together the menu – from Mikhail who researched meals that would work well in the local market to Kurt who wanted meals from his childhood recreated in the restaurant.

“He would tell us that when he was young, his mother used to cook this and that. And of course, he is also the one who tastes the food and says if it is good or not, ” says Kurt’s wife Suzianna.

The family also worked with a German consultant chef to ensure the dishes remained true to their roots. 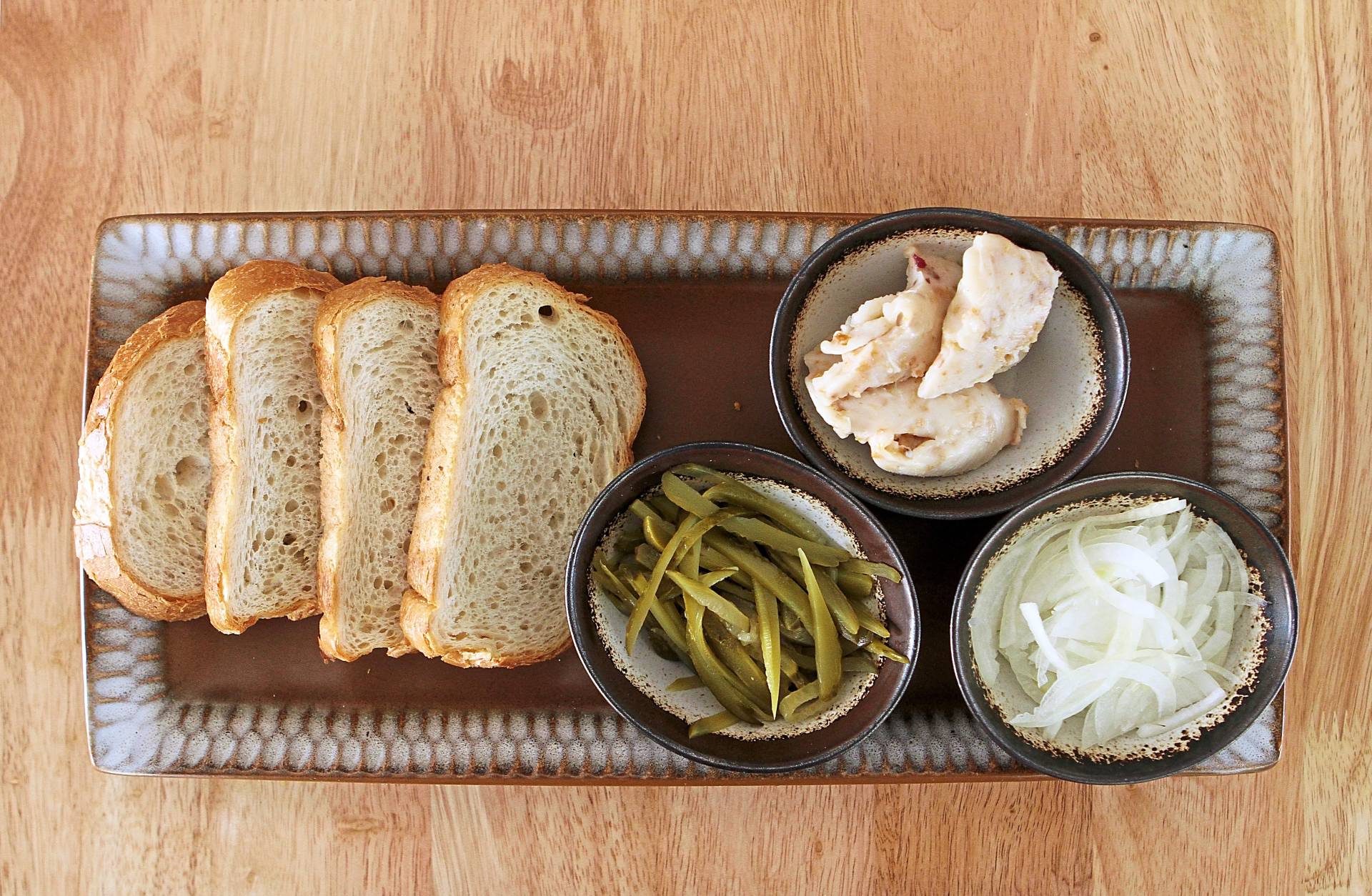 Spread the pork lard butter over your bread, topped with onions and gherkins and wait for the waves of pleasure to descend.

Before beginning your dining experience here, mentally prepare yourself for an unconventional German meal. This off-the-beaten track adventure will begin the minute you tuck into the Schweineschmalz (RM15). The dish is made up of pork lard butter infused with bacon bits. You’re meant to slather the slick, smooth butter onto the bread and top this with the sliced onions and gherkins provided on the platter. The entire concoction is really soul-awakening – the butter is luxuriously rich and interspersed with salty notes, courtesy of the lard and bacon in the mixture, while the onions and gherkins add tart, punchy notes that provide contrast and ensure that the butter never descends into sickening territory.

Up next, tuck into a hearty meal made up spaetzle, a handmade German egg noodle, devised by tearing tiny pieces of dough and dropping it into boiling hot water. In this iteration, called Hunter Spaetzle (RM35), the noodle drops are infused with spinach and accentuated with bacon, mushrooms, onions, leeks and cream. It is a meal that is redolent of comfort food and is creamy and altogether very pleasant. 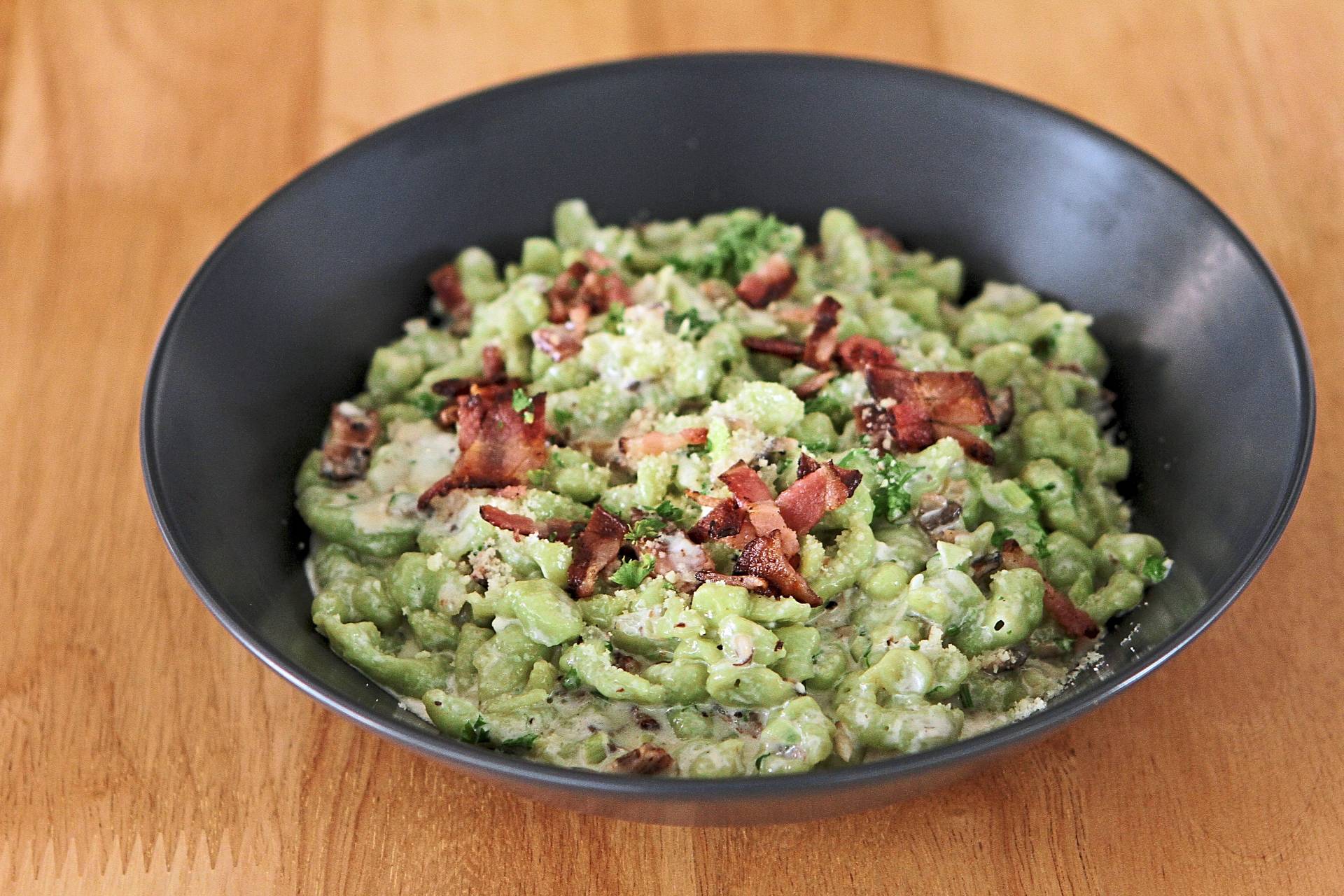 Tiny little pearls of handmade egg noodles called spaetzel are central to the success of this creamy dish filled with bacon, cream and mushrooms.

The Sauerbraten (RM55) is made up of beef slices marinated for three days in wine. The slices are quite tender but have a strong bovine quality that may or may not appeal to diners – depending on individual predilections. The blaukraut, or pickled red cabbage served on the side – is an outright winner – soft with acidic notes running throughout.

The Maultaschen (RM36) features jumbo pan-fried dumplings packed with minced pork, spinach, herbs and breadcrumbs. Each huge puckered offering is stuffed full so you’ll get a more-than-generous heaping of pork and spinach with every mouthful that you take. This meatiness is offset by the sweet, caramelised fried onions laced atop that proves to be an ingenious addition. Large, fat dumplings stuffed with minced pork form the heart and soul of the charm of the maltauschen.

Tuck into another meat-centric option in the form of the Hackbraten (RM50) which is essentially a homemade meatloaf crafted with beef and pork, tomatoes, onions and spices. The meatloaf is a tender, flavourful affair that yields delightfully in the mouth but still retains a fairly firm hold. The sauce on the side is devised from beef jus and adds a different dimension to the meat. The crispy pork belly will delight the senses with a variety of textures from the crunchy skin to the tender meat.

Perhaps the piece de resistance at Stammtisch is the crispy pork belly (RM55) which is everything you could ask for from pork belly – crispy, crackly skin that crunches pleasurably in the mouth before seguing into the tenderest, juiciest meat you could possibly imagine. Expect to hear protracted oohs and aahs of pleasure from porcine fans of every stripe digging into this palate-pleaser.

While savoury items steal the show at Stammtisch, you might want to indulge in some sweet concoctions too. Like the Kaiserschmarn (RM35), otherwise known as the emperor’s souffle. Purportedly the dessert of choice for the emperor of Austria, the dish is composed of fluffy torn souffle pieces and a house-made rum infused vanilla sauce. The souffle is as fluffy as advertised but there is also an eggy quality to each bite that is a little distracting, and persists even when you slather a ladleful of the yummy rum vanilla sauce on it. 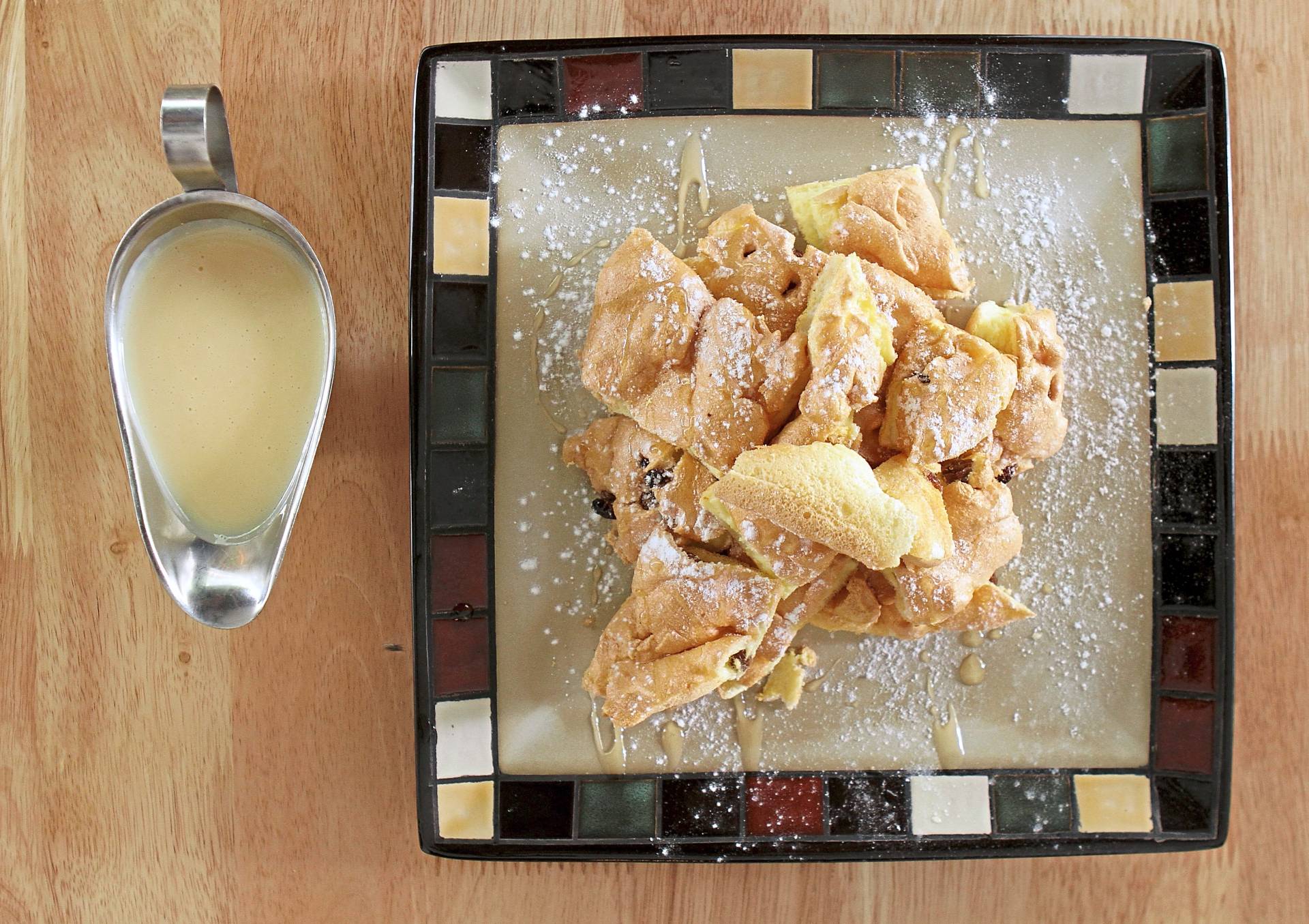 The emperor's souffle is light and fluffy but also has a lingering eggy quality to it.

“I believe that if you are trying to introduce something new to anyone, you need to give them something they’re comfortable with and build around that. But my biggest success and happiness would be if people really like the food here, ” says Mikhail.