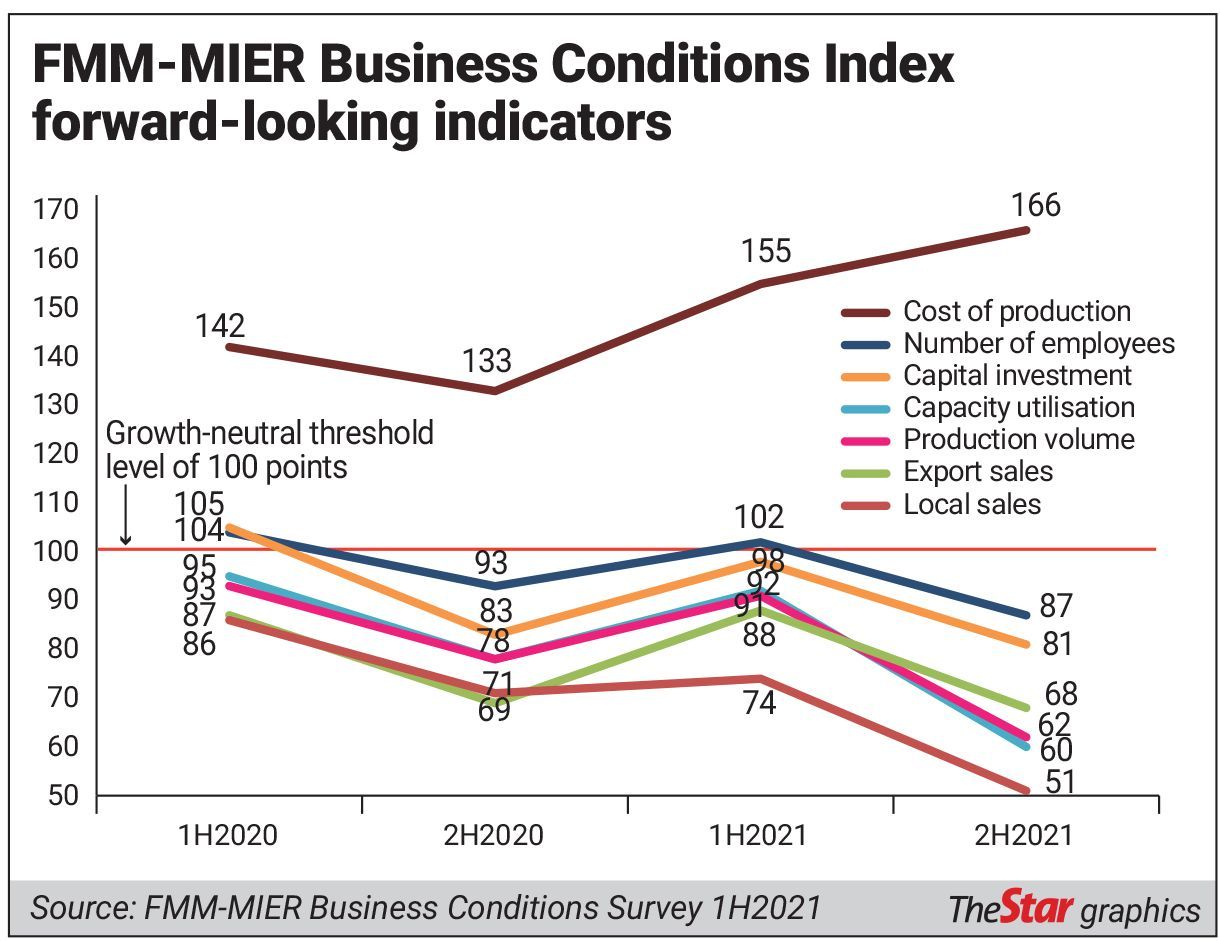 EVEN as firms hang on for the long-awaited recovery later this year, the rising cost of doing business is throwing a spanner in the works for companies already plagued by poor sales.

The recent run-up in commodity prices and continued supply chain disruptions from the fallout of the lockdown measures to curb the pandemic have driven up the cost of most things, from raw materials to logistics.

Over the past year and a half, companies have also had to deal with the additional cost of compliance to standard operating procedures and the cost of technology adoption. Businesses that rely on delivery platforms, for example, may also have to bear the cost of additional fees.

There are also concerns that the shortage of labour could add to cost constraints.

According to the latest FMM-MIER Business Conditions Survey, a bi-annual collaboration between the Federation of Malaysian Manufacturers (FMM) and the Malaysian Institute of Economic Research (MIER), production cost has continued to climb in the first half of 2021 (H1‘21) and is expected to rise further in the second half.

Only 7% said they had reduced their costs in the first six months of the year, the lowest since H2‘18.

Meanwhile, the expected index for cost of production for H2‘21 has also risen to 166. This implies that production will be costlier soon, with 72% of the respondents projecting this to be the case for the second half.

Notably, inflation has also gone up, although this can be attributed to the low-base effect from last year when the economy was shut down. 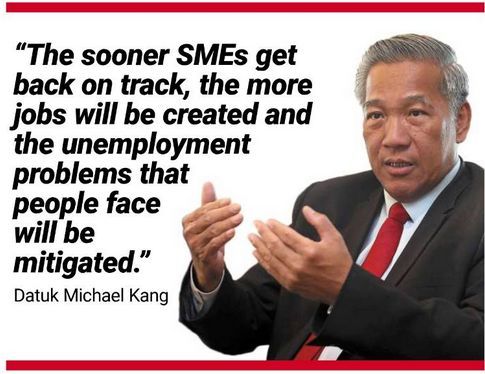 But if cost increases are left unchecked, these will be passed through to consumers in order for businesses to preserve margins.

SME associations have urged the government to look into efforts to fight against inflation and lower the cost of running a business, including reducing the prices of raw materials and suppressing the strong increase in the costs of transport and air cargo.

When asked what other assistance respondents require from the government over the next one year or so, corporate tax reduction topped the list, followed by electricity and natural gas discounts and an extension of targeted wage subsidy to all workers in all sectors.

However, there were also considerable requests for the delay or reduction in regulatory cost, including new laws and regulations in the pipeline with cost impact (51%) and the lowering of statutory costs such as licensing, quit rent and assessment fee (49%).

With sales still languishing and many still contending with tight cashflows, businesses, particularly SMEs, are finding themselves between a rock and a hard place under the ongoing movement restrictions.

An August survey by the SME Association of Malaysia indicates that most SMEs are currently in the most vulnerable stage and are likely to shut down if the economy remains closed.

It found that about 25% of SMEs have discontinued their business operations while about 54% of SMEs have temporarily closed or ceased their operations. Additionally, 45% of businesses will consider temporary or permanent shutdowns if they are unable to start operations immediately.

The association further expects 200,000 more enterprises to temporarily or completely close their operations by the end of October.

Note that about 2.6% of the respondents in the FMM-MIER survey are already in the process of winding down.

While many are hopeful of a recovery in the fourth quarter, businesses are not especially optimistic about the outlook for the second half of the year.

FMM-MIER highlights that business activity for manufacturers for H2‘21 is expected to remain as slow as in H1‘21. The index for expected business activity fell to 60 points from 87 previously, with 55% of the respondents anticipating their business to be equally slow for the rest of the year.

Only 15% are positive that their business will pick up soon.

In addition, the expected indexes for both local and export sales declined to 51 and 68 from 74 and 88, respectively, indicating that domestic and external demand will likely remain weak in the coming months as well.

About 59% of the respondents are forecasting poor local sales in H2‘21 while 50% have similar poor expectations for export sales.

“Correspondingly, 55% of the respondents are planning to reduce their production and capacities soon, while 17% and 15% will likely increase, respectively,” says FMM president Tan Sri Soh Thian Lai.

The prolonged restriction on movements and cap on manpower have also had a significant impact on business operations.

He notes that since the lockdowns on May 12, 2021, about 55% of the respondents have had their orders cancelled due to their inability to deliver, while 40% had their H2‘21 order contracts reviewed and 38% had to incur storage and demurrage costs for their cargoes which were stuck at the port or airport.

Penalties due to delays in order deliveries were also imposed on 21% of the respondents and 16% had to pay shipping cancellation fees as their cargoes could not be moved to the port or airport for export.

Unsurprisingly, many companies are looking at deferring their capital expenditure (capex) for now. Some 37% of the respondents are contemplating cutting back on their capex soon, but 18% are considering increasing theirs before the year is out.

The lower investment by businesses now will, notably, have an impact on future potential growth. This will limit expansion plans and new hirings in the short to mid-term as companies continue to focus on surviving the current situation and on re-establishing their market share.

Consequently, employment is expected to remain flat in the coming months.

FMM-MIER notes that the index for expected employment, at 87 points, had sunk below the optimism threshold. This implies that jobs in the manufacturing sector will be harder to come by in the coming months.

In fact, a quarter of the respondents intend to reduce their workforce, while 63% will maintain their headcount for now. Only 12% are planning to increase their headcount.

Likewise, the SME Association says 58% of SMEs surveyed are planning to lay off at least 30% of its employees if businesses are not allowed to operate under the National Recovery Plan.

A report by RAM Rating Services Bhd reveals that for the labour market to fully recover by end-2022, an estimated 40,000-50,000 net jobs would have to be generated a month.

“This may be difficult to achieve when many businesses have shuttered (more than 60,000 companies have been struck off the national registry since the onset of the virus), and existing businesses do not hire,” it says.

Year-to-date till June, the average jobs generated per month is estimated at 16,000.

SME Association president Datuk Michael Kang suggests that the government look into providing more aid such as a waiver of the 2021 Income Tax and business licence fees, an additional three months of bank moratorium, a 50% subsidy in rental for retail SMEs, a 50% subsidy in electricity bills for affected companies, an additional three months of wage subsidy and incentives for SMEs to restart their business with extra hiring subsidies.

“The sooner SMEs get back on track, the more jobs will be created and the unemployment problems that people face will be mitigated,” he says.